With two directors -- Mira Nair and Deepa Mehta -- whose films have been nominated for Oscars, and with the veteran actress Shabana Azmi and the relatively younger Preity Zinta joining the celebrities, the eighth edition of the Mahindra Indo-American Arts Council Film Festival opens on Wednesday in New York.

Kicking off with Mehta's Heaven on Earth which features Zinta as a beleaguered and tortured Indian immigrant bride in Canada who will fight domestic abuse, the festival will close with Little Zizou, the first directorial vehicle of the famed script writer Sooni Taraporevala on November 9.

Centering on a young Parsi boy, the film tells a heartwarming story of growing up with interesting life lessons. 'I believe local is global,' declares the distinguished writer  Sooni Taraporevala who unveils Little Zizou her first film as a director on November 8 as the closing film of the Mahindra Indo-American Film Festival. The film will be introduced by Mira Nair who has made several films out of Taraporevala's scripts most notably The Namesake. 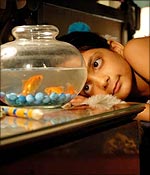 'Like Mira Nair, and with her, I have explored the world,' Taraporevala writes in the production notes of her film, 'writing about street children (the Oscar nominated Salaam Bombay!), African Americans in Mississippi (Mississippi Masala, Denzel Washington's first hit), AIDS patients in Tennessee (My Own Country)...'

After 20 years of international travel, she says she finally 'came home and wrote a story that takes place in my own backyard.'

The film revolves around Xerxes (Little Zizou) an 11-year-old football-crazy boy in Mumbai. He dreams his long-dead mother would bring the French soccer star Zinedine Zidane (Zizou) to Mumbai. But Xeres has to handle a number of problems before the soccer star could descend into his home. And the problems include a pompous father who is also a religious bigot. Xerxes' brother Artaxerxes, on the other hand, is a quiet and talented cartoonist has fallen in love with the daughter of his father's rival, a fun-loving rationalist and a community newspaper owner.

'Events pit the two patriarchs against each other in the backdrop of a Fellini-esque Parsi world in this uncommonly funny satire,' says the press notes for the film. Boman Irani leads the cast that has, Sohrab Ardeshir, Zenobia Shroff, Imaad Shah, Jahan Bativala, Iyanah Bativala.The film features John Abraham in a special appearance..

Though the film centers on the Parsi community, it deals with universal themes, says Harvard graduate Taraporevala who is also a distinguished photographer. 'We live in crazy times,' she  continues. Though we live in the 21st century, many of us lead a kind of tribal life, with 'us' against 'them' kind of  mentality.

Her film examines 'the serious problem in a light-hearted way,' she adds.

She has looked at many serious problems in her screenplays. Mississipi Masala, for instance, dealt with subtle racism the Indian immigrants bring with them.

The festival will also see the key stars of the film Slumdog Millionaire and its director Danny Boyle attending the red carpet premiere. 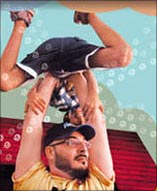 Mehta syas the film looks at the life of an artist who imprinted the iconography of Hindu gods and goddesses upon a billion minds. It is the story of Raja Ravi Varma, the iconoclast who dared mass-produce his prints and make them available to ordinary people who brought the calendars in millions with his work printed on them. From his early days under royal patronage to his trial for blasphemy for his increasingly eroticized work, Mehta has sought to bring  to life the artist's search for his muse in the early part of the 20th century, the birth of Indian modern art, the dawn of Indian cinema, and inspiring the Indian independence movement.

Another highlight of the festival is Four Women (Naalu Pennungal). According to Somi Roy, the director of the festival, there is deeply rooted humanism and empathy in the stories by the eminent writer Thakazhi Sivasankara Pillai that comes to the screen in Adoor Gopalakrishnan's gentle yet wrenching adaptation.

In each of the four tales of village women in south India, with the elemental titles of The Prostitute, The Virgin, The Housewife and The Spinster, a woman submits to a role society has determined for her. Yet the beauty of the film lies in a profound insight: that each social deference and bondage to the laws of men paradoxically offers a measure of freedom in nearly equal measure.

A Throw of Dice is a 1929 film directed by Franz Osten. One of the few German directors working in India in the early part of the 20th century, it is based on a  gambling episode from the Mahabharata. The story of Ranjit and the nefarious Sohan, two kings with a passion for gambling and the same woman, Sunita, the digitally restored version of the film was unveiled in London over a year ago to critical acclaim.

The film is the third in Osten's Indian trilogy that started with the acclaimed Light of Asia of 1926, and features the great Indian film pioneer Himansu Rai (as King Sohan), who along with his wife Devika Rani, trained at the German studio UFA in the early years of Indian cinema. 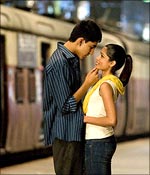 A few months ago hardly anyone paid attention to Slumdog Millionaire, the underdog of a movie about the giddy success of a slum lad in a quiz competition in Mumbai and the complications he has to face in his young life. But the film directed by Danny Boyle began wooing the audiences at various film festivals in no time, and went on to win people's choice awards at  the international film festivals in Toronto and Chicago. Soon newspapers including Los Angeles Times began to champion it for Oscar nominations.

Now, the film, which opens in a few American cities including New York, Los Angeles and Chicago on November 12 through Fox Searchlight, will have a red carpet premiere as the centerpiece film of the Mahindra Indo-American Arts Council Film Festival in New York on November 8.

"It is film about a underdog but it is also a film full of life, passion and redemption," says director Boyle.

Boyle, his lead players Dev Patel and Freida Pinto will walk the red carpet at the MIAAC Film Festival.

Shot entirely in Mumbai and loosely based on the book Q & A by Vikas Swarup, the film tells the story of Jamal Malik (newcomer Dev Patel), an 18-year old orphan from the slums of Mumbai, who is about to experience the biggest day of his life. With the entire India watching, he is just one question away from winning a staggering fortune on India's Who Wants To Be A Millionaire?

But when the show breaks for the night, Jamal is arrested on suspicion of cheating. The police want to know; how could a street kid know so much? Jamal then tells the story of his life in the slums, how he and his brother had to face many adversities, and how his childhood love Latika (newcomer Freida Pinto playing the older girl) was lost to him. Each chapter of his tumultuous life reveals the key to the answer to one of the game show's questions.

The police let him go and Jamal returns to answer the final question while the inspector (Irrfan Khan) and millions are about to find out if he the former chai-wallah could be the millionaire.

The film shared at the Chicago International Film Festival the Audience Choice Award with Mark Herman's holocaust tale The Boy In The Striped Pajamas.

Audiences chose the winners at the 44th Chicago International Film Festival that had featured 170 films from more than 45 countries.

Boyle, whose hit films include Trainspotting and 28 Days Later, also showed the film at the London Film Festival where it received rave reviews and concluded the festival.

The Independent newspaper hailed the film in which Anil Kapoor plays the show's host  calling it 'an exhilarating ride.'

The Times gave the film three and half stars out of four and declared: 'The fairytale power of the film is in watching a city evolve through the eyes of a child.'.

'There's a comic poetry about it that feels totally in tune with its Indian setting,' the London newspaper said, calling the film 'festival finale that puts a spring in your step and brings a tear to the eye.'

The Oscar buzz for the film started at the Toronto International Film Festival in September.

Soon the Los Angeles Times was writing: 'For Slumdog, which continues to be received magnificently wherever it is shown, I'd look for attention to center around Dev Patel, whose part is the most sizable in the film, but not so big that it couldn't be sold as supporting, since the film really has no one or two "leads." If Patel does, in fact, get a push, I'd be very surprised if Freida Pinto, the jaw-droppingly gorgeous Indian actress who plays his love interest as an adult, isn't tossed into the mix as a supporting possibility as well.'

(The child actors who play Patel and Pinto's characters as kids deserve equal attention, the column continued, 'but history has taught us that it is nearly impossible for a child actor to get awards attention unless he or she is precocious and white -- hence nominations for the likes of Abigail Breslin for Little Miss Sunshine but the snubs of Ahmad Khan Mahmoodzada and Zekiria Ebrahimi for The Kite Runner).

Speaking at the Toronto Film festival, Boyle recounted how he had originally hoped for an all Bollywood cast, but that failed because the local Indian actors "didn't look enough like losers" for the main role of poor Jamal. Patel, who plays the older Jamal, was raised in London.

Boyle hopes the film, which cost $15 million, do well in the Indian multiplexes. I fell in love with Mumbai," he says, "and I would love to see a lot of films watch this film."

But he told a London publication Anil Kapoor feels the movie, which has a rousing score by A R Rahman, is too subdued for Indian audiences.

Kapoor has shown interest in making an Indian version of the film.

'I'd love to see a Bollywood version,' Doyle said. 'In fact, I'd love to be the assistant director on it.'