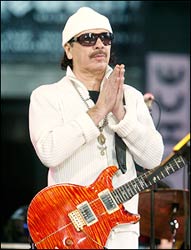 Woodstock music festival, 1969. A 22 year old from Tijuana, Mexico, was on hallucinogens. Nothing out of place, just that the mannish boy was about to play his first big show, which had been rescheduled to a day earlier than originally planned.

'I was praying to god to just let be in tune and on time,' he told Guitar Player magazine, years later. By then, his unique sound -- which legendary music promoter Bill Graham called 'about the joy of loving, the joy of giving' -- had made him an icon, a star.

And 36 years since he burst onto the music scene with his unique guitar style fusing Latin rhythms with the blues, Carlos Santana still pulls at heartstrings every time he bends a note.

His comeback album Supernatural made a whole new generation wake up to his magic. Since then, he has been experimenting with newer styles  from hip hop to rap to industrial metal.

Then again, he has never been a frog in the genre well. From jazz rock -- with the likes of John McLaughlin and Weather Report -- to Afro-pop -- with cora virtuoso Mori Kante  to the blues  John Lee Hooker, Buddy Guy, Eric Clapton -- Santana's been there, played that.

But in an e-mail interview with rediff.com, the guitar god says his newest album, All That I Am, is his most personal record yet. Excerpts:

Dear Carlos, All That I Am seems a continuation of what you started with Supernatural -- collaborating with a new generation of artistes. Is it a conscious effort to woo new, younger audiences to your music?

I don't want people to think this is part of some formula. All of the material on this disc comes from the heart, which in itself makes the music special.

What's the story behind the name of the album?

It's my most personal album to date. Hence the name.

When you collaborate with an artiste, does s/he bring the song or do you sit down and write the song together?

really depends from artist to artist. Sometimes, you work on things together, sometimes you just put in your individual thoughts and come up with something.

When I worked with (legendary drummer) Dennis Chambers on Hermes, we wanted to create a song that when one heard it, you could feel the richness of African soil beneath your feel.

When I am in Africa, I am not a tourist, but an artist absorbing and seeking knowledge. With Hermes, it is some of that knowledge I am sharing.

Who decides who you collaborate with? For instance, how did the jam with (Metallica guitarist) Kirk Hammett materialise? What was it like?

Working with Kirk was okay. Clive (Davis, Arista Records founder) came up with the idea for us to collaborate together.

Sceptics say you are collaborating with big-ticket names to ensure your albums are hits. What is your response?

As I said, these songs are from my heart. My music is all from the heart. I don't want people to think that anything I do professionally is part of some pre-planned programme.

After all these years, is music still a spiritual experience for you? Do you cut an album when you want to or when your label wants you to?

My label and I have always had a very smooth relationship. We work really well together. If there is anything that I want incorporated into the album, then I just try it out and we work together. When the label shows trust in you, it's easy to work together.

Would you mind elaborating a little on what guitars and set-up you used for the new album? Was it the PRS all the way? What kind of microphone placements did you experiment with? Or do you leave all that to the engineer?

I concentrate on the music clearly. I have a team of excellent engineers to figure out the rest. For example, when I worked with (singer) Anthony Hamilton, he had some inputs on the sound element and the clarity.

When I hear Anthony, I am reminded of brothers like Donny Hathaway or Bill Withers. Like water, Anthony Hamilton has all colours in his voice, but still it's so clear.

You are the flagbearer of an era of music and musicians that was all about experimenting, in music and in life. Do you feel the dream of rock, the spirit of adventure and rebellion, has died?

Every time and any day of the week.

What new music are you listening to?

What is the secret of your unique guitar sound?

Just a lot of heart.

What music would Miles (Davis), (Jimi) Hendrix be playing, if they were alive today?

I really have no idea, but something that brings about emotion in them, I would imagine.

Are you a political person? Your Milagro paid tribute to Dr Martin Luther King. Do you think the days of activist musicians are over?

You have been quoted as saying what George Bush is doing is not conducive for a better world. Do you feel the world is a better place in the new millennium?