Cinema of the underdogs

When Sagar Ballary first met Sunil Doshi, he had a script ready for a television film. The script, Doshi felt, had great potential -- it revolved around an idiot invited to dinner by an arrogant music company honcho -- and didn't deserve shoddy treatment.

The initial budget of the film, after Ballary failed to garner takers (read producers), was Rs 35 lakh but Doshi was willing to push the envelope and, after studying the finances of the film, they arrived at the figure of Rs 51-55 lakh.

Doshi's boutique film production company, Handmade Films, found Ballary's script promising; somewhere Ballary had faith in his own script; and soon enough, both began working with actors who had been their long-standing friends.

There was Rajat Kapoor, whom Ballary had assisted while making Mixed Doubles (where he met Doshi), and there were Ranvir Shorey and Vinay Pathak, with whom he had worked in the same film.

With finances and actors in place, Ballary completed the film's shooting in 20 days, while Doshi began working on its shoe-string budget promotional campaign barely weeks before it hit the screen.

The modest-sized unit of this equally modest film said their silent prayers, crossed their fingers and released the film with the help of Adlabs and PVR.

On April, 13, (also celebrated as World Cinema Day), Bheja Fry was released in Indian theatres with just 60 prints. Though
Doshi and Ballary knew the film would connect with select audiences, they were bowled over by the mass response. In two weeks, the film raked in Rs 5.5 crore.

Today, it has done business worth Rs 9-10 crore, 60 more prints have been added since its release and reached cities including Ajmer and Jodhpur in Rajasthan, Sehore in Madhya Pradesh and Devangiri in Karnataka. Not bad for a film that found itself pitted against a heavyweight like Ta Ra Rum Pum, released under the Yash Raj banner.

"We had to be stingy with finances and tried to save every last penny," says Ballary, who admits the timing of the film's release has been a major credential for its superhit status. "I was confident of people liking the film once they had seen it. But yes, since it was released in 2007, and not in 2006, when there were so many big-budget releases, it could reach out to wider audiences," he adds.

"Audiences this year seem to be rejecting tried and tested films," Doshi points out. "They seem to want variety, and somehow, offerings by so-called big banners aren't looking attractive enough."

Is there reason in Doshi's last statement? Are film rushes and other marketting tactics by big banners like Yash Raj Films suddenly looking jaded and worn-out?

While big budget films like Salaam-e-Ishq, Eklavya and Ta Ra Rum Pum (the first two flopped while the last one hasn't done as well as it was expected to do) have failed to live up to audience expectations, are we suddenly looking at 2007 as the year of small cinema where modest-budget films like Bheja Fry and Life In A... Metro are garnering both audiences and critical acclaim?

Why just films, Indian cinema this year is giving the green signal to new directors, producers, writers, music directors and even actors. With the lines between 'mainstream' cinema and 'alternative' cinema blurring, actors like Irrfan Khan, Kay Kay Menon and Vinay Pathak (who don't fit the industry's timeworn 'hero' image) are becoming the new darlings of the audience.

Even if these actors have been around for a while, is there an explanation as to why audiences are finally relating to the stories told by these characters? Simply put, is 2007 Indian cinema's year of the underdogs? 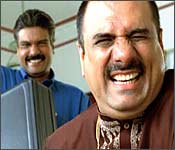 According to Jaideep Sahni, one of the best writers in the film industry today and the creative producer of Khosla Ka Ghosla (another small-budget film that went on to be a sleeper hit last year), "The year 2007 is the result of the changes and experimentation that the industry was witnessing in the last three years," he says. "In a sense, 2007 belongs to the underdogs for two reasons: audiences have become more fragmented and, yes, they are reacting negatively to familiar run-of-the-mill storylines, plots and trailers. Then, the difference between 'mainstream' and 'parallel' cinema is decimating, and the new breed of directors and writers, apart from actors, are people to whom audiences are relating. What you see in 2007 is really the cohesive result of the sort of films that were being made in the last three years."

He could be right. For someone who has successfully scribbled plots for both medium and high-budget films, Sahni feels that Indian cinema in 2007 has provided the much-needed vehicles to some of the most talented actors who had been waiting in the wings to take flight.

"Eventually, small budget films like Jungle and Khosla Ka Ghosla have made producers sit up and take note of my work," he
adds.

Actor Vinay Pathak, the affable 'idiot' of Bheja Fry, naturally feels this year is very special for him. "It's not only because of the success of Bheja Fry, it's because I've wrapped up shooting for 10 different films, and in all of them my characters are completely distinct," he says.

cinema.' This year, according to him, is the year of story-telling, which is why audiences are lapping up good films irrespective of whether they have a powerful star cast or not.

"Frankly, this change in attitude gives a lot of hope to actors like me, who earlier would have found it difficult to co-exist in the same space as commercial cinema," adds Pathak.

That the space for small films in Indian cinema is getting wider is evident from some of the numbers at the box office too. Life in a Metro, for instance, which was made on a budget of Rs 8 crore and subsequently released with a total of 163 prints, saw its first weekend occupancy as high as 80 per cent.

Within the first four days, according to a UTV spokesperson, the film had garnered a total gross box office of Rs 6.5 crore and updated box office accounts suggest that the film has made Rs 14 crore since its release.

There's also Veyil, the first Tamil film ever to have been selected for Cannes this year, which is another example of a
small-budget film raking in accolades and money at the box office. Made for a modest Rs 2 crore, and starring newcomers including A R Rahman's nephew G V Prakash Kumar, Veyil has already done business worth Rs 7-8 crore.

"Thanks to this small film, today each and everyone associated with the product has moved on to bigger projects," says the film's director, Vasantha Balan. The film, despite unknown faces (the film gave a break to nearly 50 different newcomers in different departments), was successful also because it was backed by S Pictures, one of the biggest production banners in south India.

Balan feels, "There is growing interest from big banner production houses to allow filmmakers like us to tell our story. At one time, Nagesh Kukunoor had to produce Hyderabad Blues himself. It was much later that Subhash Ghai's Mukta Arts supported the same director for his brand of films in Iqbal. I think that's what we are seeing increasingly today, and that's driving the change in Indian cinema."

He may not go on record to confirm it yet but director Ballary could well be another example of Balan's assessment. Post Bheja Fry, sources say that one of the biggest banners in Indian cinema has shown keen interest in Ballary coming aboard.

"All I can say is that my humble effort has been noticed and, yes, big banners are approaching me. What's unique is that they are willing to let me make films on my own terms and conditions," Ballary confirms.

For someone who studied film direction at the Satyajit Ray Film & Television Institute, Kolkata, Ballary says,  "The star system is gradually collapsing. The promos of big budget films look boring as audiences are pounded with the same emotions, the same faces and hackneyed stories." 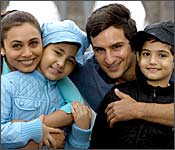 Ballary has already moved on to his next script that "is a big budget film because of the investment made in technology and not in the stars."

Director Anurag Basu feels that big production houses need to desperately give audiences a variety and that is a possibility only if they encourage newer film directors.

"There's nothing known as a 'safe' formula in Indian filmmaking anymore," Basu says. "Audiences felt cheated because of Fanaa last year which, despite garnering good numbers at the box office, was a hopeless story. Ta Ra Rum Pum is bearing the repercussions of that film today. The fact is that Ta Ra Rum Pum was a very boring story and, despite qualified actors, didn't give them a chance to do anything different. I made a successful film called Gangster, but another film on the same lines would not have worked for the second time with the same audiences."

Director Vipul Shah, who has delivered 2007's biggest hit to date, Namastey London, feels, "Indian cinema is going through a drastic change but in a very delicate manner. And it's not the small directors and producers who need big banners. On the contrary, big banners today need the support of realistic stories for their own benefit."

Sahni interjects, "A banner like Yash Raj Films is actually offering a mixed bag of films this year. From Chak De India, a film on an all-girl Indian hockey team, to Aaja Nachle, which is not the conventional hero-heroine film, the banner is offering variety for the average cine-goer's palate. If Yash Raj Films does Dhoom: 2, it also makes something like Bunty Aur Babli and distributes films like Maine Gandhi Ko Nahi Mara and My Brother... Nikhil. It is a mixed bag, after all."

But Sahni agrees that eventually the trend of cinema lies hidden in the script and not in actors or stars. "That aspect of filmmaking is bound to change. Last year, was the year of big banners but 2007 is the year of telling novel stories," affirms Mithoon, a new music director whose songs Maula mere maula, and Ek ajnabee have steadily climbed the music charts.

"A fresh dose of music will ensue only when directors and writers will offer something unique. My music is successful today because film directors are experimenting with stories," he says, adding, "Producers don't control us the way they used to. That's why the industry doesn't belong to any one singer. Newer voices are changing the fortunes of Indian cinema today."

The overall melody of these 'boutique' films was never more sweet. And the underdogs of Indian cinema never more celebrated.
Abhilasha Ojha
Source: