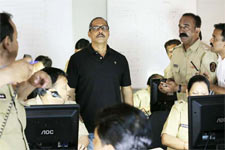 When 26/11 -- the attack by 10 terrorists in Mumbai on November 26, 2008 -- occurred, he was the senior inspector in charge of the D B Marg police station, which captured terrorist Ajmal Kasab alive.

Watching Ram Gopal Varma's film on that horrific event was quite an experience for Mr Mahale as A Ganesh Nadar discovered.

As someone who saw the events unfold before his eyes, N R Mahale found some of the discrepancies in Ram Gopal Varma's The Attacks of 26/11 unsettling.

He was upset with a scene in which a man's throat is slit.

He was very affected at seeing the replay of the shootings at the three main locations -- the Chhatrapati Shivaji Terminus, the Leopold Cafe and the Taj Mahal Hotel.

At the CST shooting, he identified Railway Police Inspector Shashant Shinde (who died during the attack) much before the action started.

At one of the locations that was attacked, the Cama Hospital, he pointed out senior police officers Sadanand Date, Hemant Karkare, Ashok Kamte and Vijay Salaskar.

He also pointed out that in the lane next to the St Xavier's College, the shooting occurred from the opposite side of the Corporation Bank ATM which had bullet holes in it. In the film, the shooters are shown near the ATM.

Maruti Phad (the police driver, who was at the site, and was shot at by the terrorists) had also pointed out to this reporter that Kamte had got down from his vehicle and fired at the terrorist visible on the road.

The other terrorist, who the police officers did not see, mowed them down from the side of the vehicle.

Two policemen were in Karkare's vehicle when Ajmal Kasab, the lone terrorist to be captured, and his partner Abu Ismail, hijacked the vehicle. Mahale knew a mobile phone would ring, killing one of the policemen.

The survivor, Arun Jadhav, told me that the damn phone rang, attracting the killers's attention, Mahale told this reporter.

At Chowpatty, the Skoda car that Kasab and Ismail hijacked was forced to halt when confronted by a police barricade.

Ismail, who was driving the hijacked Skoda, was shot dead by Inspectors Kadam and Bhoudankar, who were positioned on either side of the road.

In the film all the policemen are seen shooting from behind the barrier, an unnecessary inaccuracy.

"They could have asked me or any of my men, we are in Mumbai," Mahale pointed out after we saw the film.

After the shooting, the film shows Kasab opening the car door and falling onto the road with his machine gun in his hand. The cops approach slowly. Constable Tukaram Omble reaches Kasab first and bends down to recover the weapon.

Kasab fires. Omble does not let go of the weapon even though he has been fatally wounded. This single act of bravery saved a lot of lives that day.

Seeing what Omble was doing, the other cops beat Kasab senseless. Inspector Govilkar received a bullet injury to his back. In the movie, Omble is shown trying to disarm Kasab who is still sitting in the Skoda.

"Nana Patekar is playing (then Mumbai joint commissioner of police, crime)) Rakesh Maria," Mahale said during the screening. The Maria/Patekar character is shown as the first police officer to interrogate Kasab after his capture.

Mahale was not happy with this scene.

"I was the first to question Kasab," Mahale said. "I asked him, 'Kitne aadmi the? (How many are you?)', as we did not know how many terrorists we were facing. Then I asked him where he had come from and the name of his associates. Then we filed a panchnama and FIR (First Information Report)."

"Rakesh Maria then came to the hospital and took over the interrogation. We did not take Kasab to Maria's office as shown."

As we were walking out of the theatre, Mahale said, "Brilliant movie. I liked it a lot. We know the discrepancies as we were part of the investigation, but the public will not know. They will enjoy the movie. Mumbai people know part of the story, but the people in other cities will like this movie more."

The retired detective felt the two-hour movie should have been longer. "It should have been for three hours. He showed our people getting killed at CST, Taj and Leopold. He (Ram Gopal Varma) should have also shown our commandos clearing Nariman House, then the Trident (hotel) and finally the Taj."

"That would have left the public with a positive mood. This is a negative ending. He (Ram Gopal Varma) should have taken it to its logical conclusion. All in all, it is good work." 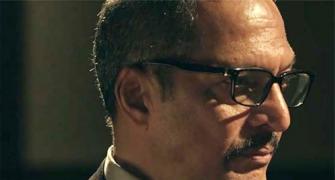 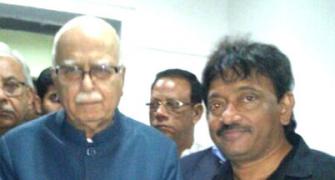 When Ram Gopal Varma made L K Advani cry
RGV: With Kasab's hanging, I have got ending for my film Review: The Attacks of 26/11 gave me a headache