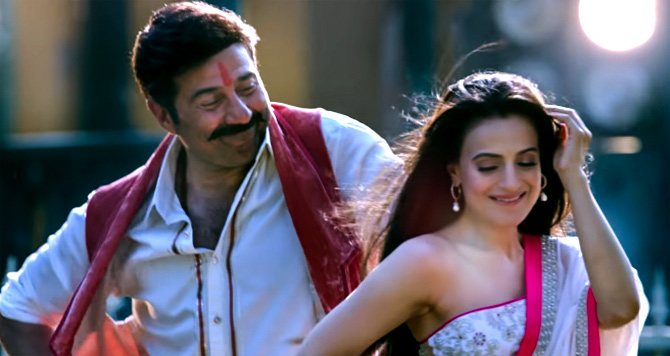 There was a time when Sunny's super sound -- the man and not his studio -- loudly lambasted the villain and drew cheers from an elated crowd.

But years of repeated hollering and hostility have literally downsized Sunny Deol's might into mockery.

Such gigs have outlived their shelf life and do little more than humiliate our nostalgia for a shopworn action hero when a movie stinks as badly as Bhaiaji Superhit.

So devotedly dimwitted is this long-in-the-making junk in its attempt to be funny, it's weird not one person had the sense to call out the claptrap.

After last week's jumbled satire Mohalla Assi, where Deol tried to pass off as a Sanskrit scholar and priest, the actor is back in Benares to play a bungling don.

When he is not breaking glass and furniture like a dinner-deprived gorilla, he's moping about his suspicious wife's departure to a doltish shrink.

Sunny's wardrobe of flashy velvet jackets and floral scarves could be a legitimate reason for her to walk out on him and serve divorce notices.

But that is not the case.

Nothing here happens for a reason.

It happens because a scrap of paper instructs so.

He yells 'Jai Mahakal!' looking heavenwards and it starts to rain heavily.

He has got skeletons buried in his backyard but bats for the cause of bereaved fauji families. And squeaky-voiced lookalikes conveniently fall in his lap.

In this scenario, Preity Zinta's descent from bubbly to bhabhi is the least of Bhaiaji Superhit's problems.

Brawny men and bikes are tossed off the screen while cars fly and explode like a low-budget Rohit Shetty nightmare.

Continuity is a serious myth. A character is kidnapped in one outfit, rescued in another. A clean-shaven chap grows a thick beard overnight and hairstyles change at the snap of a finger.

Everybody keeps bumping into each other as if they're living inside a fish bowl. Only it's weed, not water, they are floating in.

What I've just described is only the icing of the Bhaiaji baloney.

The scammer is hired to make a movie about Sunny and Preity's estrangement -- because the actual director Neeraj Pathak believes that's how marital tiffs are resolved.

Dump Ameesha Patel and Shreyas Talpade into this moronic mix and things are guaranteed to worsen.

If Patel shoots a sleazy sex video as blackmail ammunition, Talpade decimates Bangla by inundating every single dialogue with Dada.

Clearly this much torture is not enough for Pathak as he insists on flashbacks and fights to prolong our misery and his own embarrassment. 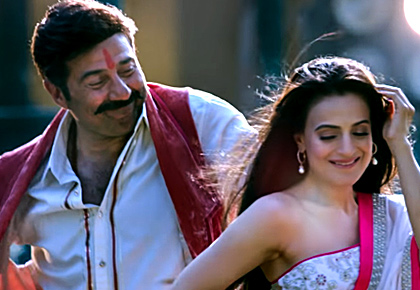 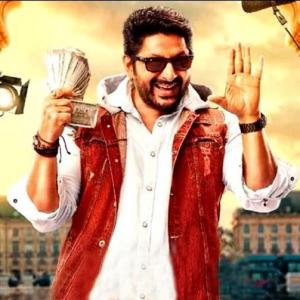