News
Business
Movies
Sports
Cricket
Get Ahead
Money Tips
Shopping
Sign in  |  Create a Rediffmail account
Rediff.com  » Movies » 'It is too early for us to develop an ego'

'It is too early for us to develop an ego'

At a time when composers, arrangers and anyone with a passing reference to music is doing their take on R D Burman's music by way of remixes and tributes along comes a duo that actually celebrates the legendary Pancham's style through their compositions. have intelligently transplanted Pancham's rhythms, orchestration and sound patterns into their original and very contemporary tunes.

Vishal, lead singer of the rock band Pentagram, and Shekhar, a trained vocalist who produced his album First Love a few years ago, first joined forces to compose the title track for Raj Kaushal's Pyaar Mein Kabhi Kabhi half a decade ago.

After creating songs like the title tracks of Mujhe Kucch Kehna Hai and Rehnaa Hai Terre Dil Mein, they are ready to storm the music world with their first major film album, says Deepa Gumaste:

How did the Vishal-Shekhar team come about?

We had been friends for years before we were commissioned by Raj Kaushal to record a few songs for Pyaar Mein Kabhi Kabhi. We did a couple of songs each and recorded the title track together.

Then we got to record the title song for Champion and things started happening.

First of all, it is too early for us to develop an ego. Second, the world over, film soundtracks are an amalgamation of different sounds. Actually, we are glad filmmakers we have worked with are accepting new talent. They have been very fair and professional with us and given us a billing for each of our compositions.

It was fun working with a director like Sanjay Gupta. The brief he gave us was so crystal clear it was easy to create a song (Chhod na re) to suit the situation.

What was your brief for Jhankaar Beats?

Sujoy had the script ready and bound when we started work and he knew exactly what he wanted each song to be like. He wanted our music to be a tribute to R D Burman.

Also, he wanted the songs to be simple, not the typical filmi orchestration.

The film's theme song sounds almost as if RD had composed and sung it.

That was an instinctive song. We created a tune reminiscent of his music and then got his musicians to play like they would for him. Sudesh Bhosle did the rest. He is brilliant.

Sujoy also insisted we get Amit Kumar to sing a couple of songs. He recorded the song Boss kaun hai in one take! It took us 10 minutes to finish that song.

Vishal, you have also written the film's lyrics. Is that a hidden talent?

Actually, I am a lyricist by default. The dummy songs I wrote fit the situations and hence they were retained.

What do you think of remixes?

Remixes are now made overnight and churned out without a care for quality. 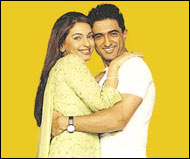 Done well, remixes rock. Done badly, they are terrible. But whichever way you look at it, remix is here to stay. It is not a passing phase, but a huge industry all over the world. Our own songs have been remixed. I think the Dance Masti remix of Musu musu from Pyaar Mein Kabhi Kabhi was nice.

Also, Sujoy's next film provided he can still tolerate us.
COMMENT
Print this article