News
Business
Movies
Sports
Cricket
Get Ahead
Money Tips
Shopping
Sign in  |  Create a Rediffmail account
Rediff.com  » Movies » 'There is an excellent chemistry between Jesse and Shriya'

'There is an excellent chemistry between Jesse and Shriya'

One of the most successful independent film producers in Hollywood, Ashok Amritraj has worked in the past three decades with every major Hollywood studio.

When his new film, the romantic comedy The Other End of the Line opens soon, he will have three films -- Battle in Seattle and Traitor -- running simultaneously across the country, perhaps a record for an independent film producer.

Playboy magazine once asked actor Paul Newman [who at the time had been married to actress Joanne Woodward for more than 25 years] how he was not involved with any other woman. Newman said something to the effect. When I have a great steak at home, why should I care for a hamburger?

[Roars with laughter]. I have a similar story to tell. I am planning the remake of a great hit of the 1970s, Ten, starring Julie Andrews and Bo Derek. Bo is the sensuous woman in the movie, and now we are looking for a young and sensuous actress. One of the people I know well said, 'You [along with the director] will be interviewing so many actresses. Won't you be tempted?" I said, "No. I have a perfect TEN at home.'

You have been married for quite some time, haven't you?

[Laughs]. I dated quite a few people in Hollywood. But as I grew older, I felt I should marry someone from India. I had very limited time to go to India to search for a future wife. So I thought, Let me ask my best friend to help me. And who would that be but my mother. She made a short list of people, and I spent over a week in Chennai and came to marry Chitra. 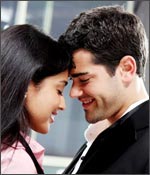 Going back to people like Paul Newman. There are people who make movies in Hollywood but are scared to raise families there.

I can understand that fear. But some people can remain in Hollywood and keep their value system intact. It is not easy. When you are surrounded by glamour, and you have millions of dollars floating around, and have a private jet at your disposal, the temptations are too many. But if your value system is strong, you can survive and have a great family life.

How is the value system ingrained in you?

It has to do a lot with parenting, and your childhood. Though I have lived in Hollywood for three decades, all my school and college education was in India, in Chennai. As I grew older, I began to realize more and more the importance of family life. That was the important reason that I decided to marry an Indian. Because of my work, I have to spend many days away from home but my family understands it. They know how much I am committed to the family and how much I enjoy being with them.

When you started making films in Hollywood, you were able to connect with some of the veteran actors there. What have you taken from them?

Two people, Charlton Heston and Sidney Poitier, gave me a lot of encouragement; it is my regret that I never got to make a film with them. Chuck Heston told me that one should not get involved in a project that did not make sense to oneself or did not engage oneself. He loved doing the biblical and epic films such as Ben-Hur that appealed to his sense of religion and character. Sidney was drawn to films that dealt with racism and social problems.

You also worked with Sylvester Stallone in Get Carter. Did you take any life lessons from him?

Stallone was an inspiration for me in the mid-1980s when I was struggling to make bigger films. I was a newcomer in the industry and I was very much an outsider; though I was known as a tennis star, I wasn't anybody in Hollywood. I remembered the struggle Stallone had to undergo to make Rocky but he would not give up his project. At one stage, producers were willing to finance the film but they did not want him to play the lead. He would not give in. And see what happened. I learned to be focused and deterimined by reading Stallone's story. 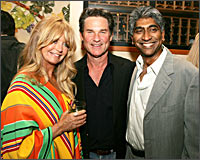 Today when I look back, I think of my days as a student in Madras [now Chennai] when I used to watch many Hollywood films. And then I think of how I came to make films with some of the actors I had idealised back in India. For instance, Dustin Hoffman who played the lead in my film Moonlight Mile. It all looks surreal [Laughs].

What life lessons would you offer to the young and up and coming producers and directors in Hollywood?

Be focused and be disciplined. Don't be overtaken by the glamour factor. Never mind what you hear about Hollywood, integrity does matter here. And you are remembered for a long time for your kind deeds as well as for the hurt you might have caused. In some ways, this can be a very unforgiving town.

How many projects vie for your attention each year?

In the past decade, I would say some 1,000 a year. Of these, hardly about three dozens interest me but we cannot produce all of them, whatever the reason be, and we end up with four to six films in a year.

Soon you will have three of your films running simultaneously across America.

It shows my commitment to the movies. Each of these films -- Traitor, Battle in Seattle and The Other End of the Line -- is very different from each other. You know Battle in Seattle was shown at the Democratic Party's national convention as a vehicle to discuss the controversial issues connected to globalisation. I have been doing similar things for a very long time. But this is the first time I have three films running simultaneously across the country. I don't think there are any independent producers around who have such a thing happen to them.

What drew you to The Other End of the Line?

We wanted to make this film for a long time. It is a cross-cultural love story and features Indian and American artists. It was going to be a big-budget film for MGM, but MGM was sold to Sony and the project fell through but we persisted though we had to scale down the budget. It is a small film compared to the $20-$25 million films such as Traitor.

What kind of a release would The Other End of the Line have in North America?

It is important to us that MGM is releasing the film even though it did not produce it. We are taking it to some 100 theaters but if we gets big response, we surely are going to expand it. 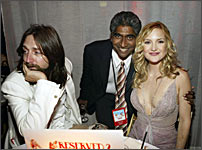 How do you cover the risk on a film like The Other of the End of the Line?

Though it did not cost us a fortune, we know every film should be able to recover the investment. In my case, my films are sold in many territories before they open. Distributors buy a slate of films from us. And that means they know that a so-called risky film could be covered by a potential hit. We have recovered most of our investment from The Other End of the Line. I also knew right from the start that had I wanted to make a big hit of a film, I would have made another Premonition or Bringing Down the House.

This is a contemporary film set in India. What is that you did not want to show about Mumbai?

I did not want to show the poverty and the underbelly of Mumbai. If other producers and directors want to do it, it is fine. I wanted to show Mumbai as a romantic city, just the way San Francisco is, and where quite a bit of the film [The Other End of the Line] takes place.

And yet you do not show Mumbai as an over glamorous city as many Bollywood films do.

That was also a conscious decision. The city certainly has a romantic air to it but we wanted to show it without glamorising it. Everything had to look natural in the film.

What are some of the things you like best about The Other End of the Line?

It has certain kind of sweet innocence to it, and any one can relate to the film. And it is also a film set in a very global world. This kind of a story would not have imaginable a decade ago. In the film a young Indian woman working for a call centre in Mumbai suddenly catches a flight to San Francisco to meet with a young American man she had contacted only through the customer service at the call centre. There is a kind of romantic adventure here.

How about the lead pair?

It is to director James Dodson's credit and that of the actors that there is an excellent chemistry between Jesse Metcalfe [Desperate Housewives] and Shriya [Sivaji]. At times in the movies, you see the lead artists performing well by themselves but when they are together there is no spark.

People refer to you affectionately as the rajah of Hollywood.

[Laughs]. I would love to see myself as a bridge-builder between Asia -- India in particular -- and Hollywood. The End of the Line is a film in that direction. I want to provide a platform for Asian including Indian artists and directors to be connected with Hollywood.

Does any Indian producer or talent leave Hollywood without meeting you?

[Chuckles]. Some say they come to Hollywood with three addresses: Universal, Disneyworld, and Ashok Amritraj's office. I always try to make time for anyone from India who has something serious to discuss

You have made all varieties of films, including crime fiction and art-house films in Hollywood. Have you by-passed any project and seen it become a hit elsewhere?

[Chuckles]. The movie The Devil Wears Prada was offered to us and you know what a big hit it became for Fox. This kind of a thing happens in Hollywood all the time. We know the famous story of how Columbia let Spielberg's ET go and how Universal Pictures grabbed it. If we knew which project could become a major hit, we could all be billionaires in no time.