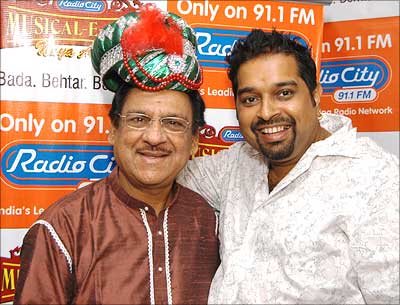 The singer interviewed ghazal stylist Ghulam Ali on Radio City 91.1 FM's morning show, Musical-E-Azam. The legendary singer showed off his extraordinary memory as he recollected his first performance, and his meeting with Mohammed Rafi with near-photographic detail.

Continuing in our series, rediff.com presents excerpts from a conversation between Shankar, Ghulamsaab and RJ Manish Paul.

Shankar: Manish, How are you? It is a very special day.

Ghulam Ali: Don't call me Ustad. I am a student and wherever you call me, I will be there.

Shankar: I have been listening to you since childhood. I never thought I would be interviewing you. This is your first radio interview and you have obliged us by coming here. Tell us where you were born, and about your childhood.

Ghulam Ali: I was born in 1941 in Pakistan's Sialkot district. I was six at the time of the Partition. I have foggy memories of people crossing the border. Once, when I was six or seven years old, I was humming a song in the class and my master Ebrahim noticed and called me. I was terrified and afraid he would punish me. But he just asked whether I was Daulatbhai's son. My father was also a musician.

Then he asked me to sing the song I was humming. I sang the song and my master, also a singer, was very impressed by me. At the age of eight, my father gave me a raaga and asked me to rehearse it on the harmonium. I worked on it for a month and learnt it. My grandmother was very angry with my father because she felt that he was overstretching a small child like me, but my father explained that my age was the right time to build the base in music.

Shankar: Can you tell us something more about your childhood?

Ghulam Ali: My name 'Ghulam' was given by my father, a great fan of Bade Ghulam Ali Khansaab. He used to live in Lahore. I had always been listening to Khansaab, since childhood. My father used to take me to Lahore, 100 km away from our village. We used to travel first in a tonga, and then take a bus to Lahore.

Bade Ghulam Ali Khansaab used to sit near Lahore Shahi Masjid on a charpoy surrounded by people. He used to talk about music and his singing used to give me goose bumps. After the Partition, Khansaab came to India. He used to come to Pakistan once a year to meet his younger brothers. Once, he had gone to Kabul for some music function, and my father also attended. He requested Khansaab to take me as a student. He in turn asked me to sing and I was terrified. I recalled a little of what I had heard of Khansaab's own thumri and sang it.

Shankar: How did he react?

Ghulam Ali: He was pleased seeing my dedication to music. He told my father he would baptise me as a student. He was based in India and said I would learn under the guidance of his brothers, who were based in Lahore. I stayed in their house. There were other students and we had to do household chores like filling water, washing vessels etc. We never had any specific time for learning. We were taught in between the work.

I was a good student. Whatever they used to teach, I would retain it. Once I was rehearsing on the terrace, and a person from Radio Pakistan had come to meet them. He heard me and was very impressed. I was called down and he asked me whether I wanted to sing on the radio. In those days singing on the radio was very prestigious.

I replied that if my teachers permitted it, I would come. When I was called to the radio station and they started my audition, they stopped me mid-way. I thought they had rejected me, but the station director and deputy wrote 'Excellent' as their remark. I was only 14 years old when I started singing for a children's programme for Pakistani radio. In six months, I progressed to the topmost level.

Manish: I praise you for remembering the minutest detail. You know the dates and everybody perfectly well.

Ghulam Ali: It is God's grace. My father used to say, always remember your past. If you forget your roots you may become proud, and God does not like people who are proud.

Shankar: Your first composition was...

Ghulam Ali: It was Shyam-e-Subah. It was the first recorded song of mine. The shayari I sang first was Janab Ahmed Nadeem Qazmi saab's first shayari as well. Today, all the poets swear by his name and everyone praises him. He will be remembered for generations and though he was old, he had freshness in his poetry. He passed away in August 2006, at the age of 97.

Shankar: Tell us about your meeting with Mohammad Rafi.

Ghulam Ali: It was in 1980 and I had come to India for the first time. Rafi was an early riser, and used to get up at 5:30 am. He saw my photo in the newspaper and was excited to meet me. I was staying at the Taj Hotel where he called me at 7 am. I was sleeping, having returned late at night.

I did not recognise his voice, so he introduced himself and I was very excited to hear his voice on the other end of the phone. He invited me for breakfast to his place and sent his brother-in-law to pick me up. I went to his home in (Mumbai suburb) Bandra. He rushed out of his home without slippers and in his night suit to embrace me.

His house was filled with awards and I said 'aapko toh poori duniya sunti hai' (the whole world listens to you) and he replied, 'lekin main aapko sunta ho' (but I listen to you). It was his greatness. He gave me a gold ring and a shawl. He took many photographs of mine, and these were published in Pakistani newspapers too.

Shankar: Tell us about your album with Ashaji, Meeraj-E-Ghazal.

Ghulam Ali: This was in 1984. Ashaji is a very great singer. Ghazals are difficult to sing but she makes the job pleasurable. She never accepts defeat.

Shankar: I am anxiously waiting to hear your son Aamir's album. Tell us about it.

Ghulam Ali: Yes, he and his cousin have arranged and composed it. He has sung two songs with Ashaji also. I have also sung with them.

Shankar: Do you have any advice for students?

Ghulam Ali: I am also a student. One should always keep on discovering oneself. Life is short. Forget the sorrows and keep on lighting new hopes. The young generation should concentrate on classical music. The audience too should listen to music not only physically, but mentally too.