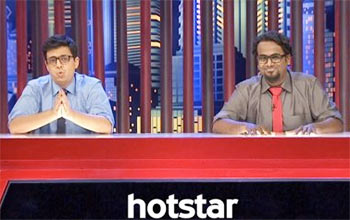 All India Bakchod's new show is sure to leave you in splits.

And they are back with a bang!

But this time, it's not a Roast -- it's a news comedy series.

All India Bakchod (AIB), a prominent comedy group, recently made their debut on Star India's Hotstar.

The show is available in two languages -- Hindi and English -- and is titled Zaban Sambhalke and Why Be Good respectively.

Tanmay Bhat and Gursimran Khamba host the Hindi version, and Rohan Joshi and Ashish Shakya (in the picture) host the English version.

So, what do they do?

They discuss several socio-political issues in pure AIB style -- which they refer to as Tragedy Pe Comedy.

Now, we often talk about problems people face in and around the country, but never end up doing anything to resolve it, right?

They think let's do something now!

They point out the hurdles that whistleblowers in our country face in their own funny way.

And with such punchlines -- 'Before beef was the main issue, corruption was, Pehle kisne kitna khaaya was more important than kisne kya khaya!' -- they keep up the momentum.

One of Bollywood's favourite villains, Prakash Raj makes a cameo in the show, and he warns those who want to bring a change.

He says, "In films villains die, but in real life they don't."

The show features a few funny clips, like the one where Rahul Gandhi uses the word 'Brashtachar' (Corruption) instead of 'Balatkar' (Rape).

Then they take us to Tamil Nadu where another fellow comedian from the group, Abish Mathew meets Limca Book World record holder Dr K Padmarakan.

And what record did he make? Not by performing impressive stunts... but by losing in 171 elections.

On being asked if he ever formed a political party, what would he name it, Padmakaran confidently answers "Election King Failure Party".

But the funny part is, he will continue filing nominations for the rest of his life.

Overall, the show is quite entertaining.

Although Tanmay fumbles few times while reading from the prompter, it's fun to watch them try cracking jokes in Hindi for the first time. Perhaps they could have gone the Hinglish way.

If you missed the first episode, you can watch it on television from November 1 at 10 pm, every Sunday after Amitabh Bachchan's 'Aaj Ki Raat Hain Zindagi' on Star Plus and Star World.