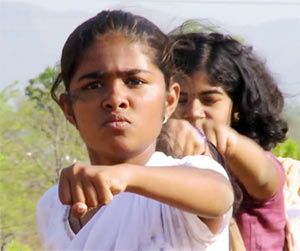 In the documentary The World Before Her, a young girl has to submit to the will of her father for a most gut-wrenching reason: 'He let me live… I am a girl… but he let me live.'

The world has always been divided into two. A world of men and a world for women.

As human society was formed, man with his brute force took charge of manual labour like hunting, chopping wood and creating shelter, while the woman raised the family, sustained it and turned the four walls into a home.

The world has changed since those primitive days. With technology and industrialisation, the traditional paradigm began changing and is evolving every day.

That a woman is a man’s property is a myth that has now become firmly rooted in the DNA of our society. The day a girl is born, she is treated like the property of her father -- an outsider, a responsibility who will be married off to a man who will own her. She then has to provide him with a son so that the child provides for the parents in their old age.

It is a convenient model of self-survival of the male, for the male and by the male.

Equality would threaten this equation, so the woman is beaten, abused and broken until she submits and relents.

Religious texts were tailored to project the ideal submissive woman; in many cases still, it remains a doctrine that is passed on from mother to daughter.

An Indian mother is sometimes brainwashed to the extent that she is ready to kill her girl child. But, no matter how much a man abuses her, she is not known to kill a male child even though she knows he may grow up to be a sanctimonious, violent man who beats up women just like his father.

There are many Indias and in one of them -- the new, modern, largely urban India -- men and women are both educated and work alongside. Yet, even here, the woman has to struggle to make her mark and work doubly hard to break the glass ceiling.

But she at least has a fighting chance.

She goes out daily, lives with the prying eyes of Indian men that strip her bare no matter what she wears. She is mocked at, whistled at, ogled, touched, molested and always lives in fear of rape. She wages a daily battle to be taken seriously at work and is called vulgar names in return.

It is the price that today’s woman pays so that the next generation of women have it better than she did, just like their mothers paved the way for them.

In a parallel world there exists the traditional India where the woman is required to stay at home and be the homemaker. This is not a choice that she makes, it is made for her by the master of the house.

She has to dress in a prescribed way and cannot complain about the prying eyes of Indian men that strip her bare. She too is mocked at, whistled at, ogled, touched, molested and sometimes raped.

A woman isn’t allowed at the funeral of the men whom she has been serving throughout life.

Women in both parallel worlds aren’t allowed inside temples during their menses because the menstrual blood that creates life is considered dirty.

Women in both parallel worlds are called sluts if they choose their sexual partners while men who have scored are admired as studs.

The looks of women have been celebrated through the ages and across the world -- captured in paintings, books, poems, movies. There is much less celebration of manly beauty.

The woman has been the object of desire, the property of men or, as she is called in Bollywood movies -- maal or cheez -- or on the streets, ‘item’.

This maal is raped across this country with absolute impunity and woe betide if she complains because it must be her fault that the man raped her.

It must have been her looks, her clothes, her body, her behaviour that enticed the man to lose his senses.

The woman is always the culprit no matter what is done to her.

Yet, she goes on living and goes on dreaming her Utopian dream of equality in a country where we worship goddesses, a country which has goddesses to represent wealth, education, culture, work instruments, virtue and war.

A country we call Bharat ‘Mata’. A country where the most common names are Sita, Durga and Parvati. Yet, in our homes, she is raped and beaten and butchered.

It is ironic that our greatest religious text is called Gita; the innocent and guilty alike put their hands on her and swear to tell the truth and nothing but the truth.

In this ironic world comes a chilling documentary, The World Before Her, by director Nisha Pahuja, expertly cut by star editor David Kazala.

It shows the world of the Durga Vahini, the women’s wing of the rightwing Vishwa Hindu Parishad that claims to be about empowering women.

The Durga Vahini teaches the girl that her role on this planet is to serve man and bear him children. Any thoughts about being independent deserves a smack on the face or, in the case of the teenaged Prachi Trivedi (in the picture above), who figures in the documentary, to be burned by a hot iron rod when she was a child for telling a lie.

She is taught to live this life and indoctrinate others in this camp. She lives in a world where Muslims and Christians are the enemy. Where actresses and models are women of lesser virtue because they parade their bodies for the enjoyment of the world.

The documentary also shows the world of the Miss India contestants, a world where a young girl (Ruhi Singh) dreams of being loved and accepted by the country and being empowered financially.

But she is judged on the basis of her body and a smart answer. Her body is broken down and reassembled to suit the taste of men as she prepares to become part of the international multi-billion dollar fashion industry.

The strong-minded and independent thinker and Durga Vahini activist Trivedi may dream of never getting married and carrying forward the doctrine of the organisation. But, at the end of the day, she will have to submit to the will of her father, for a most gut-wrenching reason. With tears in her eyes, she says, “He let me live... I am a girl... but he let me live.”

But it is just not enough to be alive.

Breathing is not living. 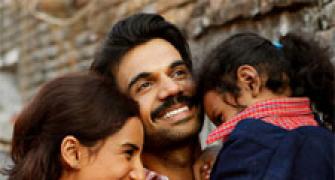 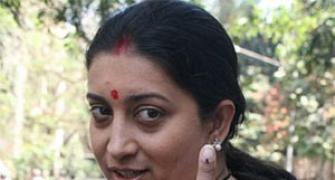 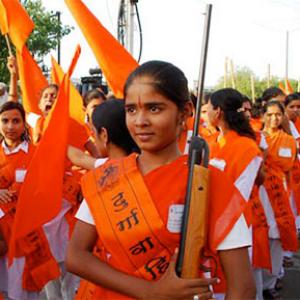 Review: The World Before Her is a disturbing watch