The Age Of The Couch Potato

Welcome to my sometimes silly, sometimes sordid world. This is a column where I launch into absolutely whatever, keeping it nice and sporadic and talking about anything under the sun, usually related to entertainment.

So how do we start off? Well, I'd love for you guys to email me stuff you think could be realistic fodder for this column and therefore spin out debatable discussion groups from there, but this is day one of this weekly enterprise, and we're left to freewheeling, minus-feedback.

One of the questions I'm most asked -- by friends, colleagues and abject strangers who have just learnt what I do for a living and are quite bemused -- is about recommendation, about what DVDs last made my brain explode and what cinema -- be it groundbreaking, gruesome or guffaw-provoking -- I would urge you to try out.

Well, after an exhaustingly brilliant Oscar crop this year, I've really not been in the mood for substantial cinema. What I have been glued to, however, is television.

American television today, thanks to edgy networks like Showtime and HBO, is producing intelligent, mature, adult content that is far superior, especially in both character development and consistency, to most anything out there on the big screen. This week, then, we'll take a look at a few shows you should hunt out DVDs for, or use your broadband connections to acquire.

Because you can't watch a smart show actually on television, of course.

For one, our channels are typically pushing rather dated content. Then, besides the mindnumbing barrage of commercials, there's the problem with following the narrative, keeping up with the showtimes and making sure you don't miss an episode. And it's frustrating as hell to be in the middle of a superb story arc and have to wait a week to pick it up again.

So yeah, DVDs or downloads. Full episodes, occasionally accompanied by feature-length commentary, brightly written scripts you can pause and replay and savour as and when you will, minus advertisements. Honestly, with the running time you get on even a three-four DVD set, they're a value-for-money steal as well, compared to buying a film on disc. 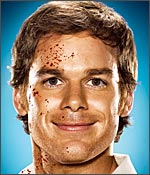 We start with Dexter. This Showtime series is a ridiculously addictive run through the self-obsessed mind of a serial killer by night -- and a Miami Police blood-splatter detective by day. The titular sociopath is a deeply deranged individual with extreme, warped morality, only exceeded by his precision and attention to detail. It is a fantastic watch, a dozen one-hour episodes making up a season, and the production values are excellent. Oh, and the opening credits are the coolest ever. Really. Check them out on YouTube now.

With a peculiar flashback-aided narrative, the show balances an almost-crusading character who kills only rapists and murderers with a man who takes tremendous glee in ritualistically slicing up his victims with sanitary care -- to form a title character as confoundedly grey as they come. The cast is excellent, and the supporting characters each come into their own as the story unravels fluidly, in violent spurts -- like blood from a cut artery. It's excruciating now having to wait for season three, which only starts this Fall. 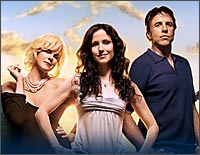 Another rollicking watch is the dramedy Weeds, starring the fabulous Mary Louise Parker. Set in cliche-typical American suburbia, the show is about a suddenly-single mother of two dealing in marijuana to make ends meet after her husband dropped dead while jogging. It's an insane subject, and we follow Parker's character Nancy as she deals with corrupt authorities, gangsters wary of her reneging on their turf, medical marijuana stores and DEA agents -- none of which seem like as much trouble as her dysfunctional family.

Admittedly, it's almost a soap, but it's clever and compelling. The opening credits are superb, set to that addictive Little Boxes song -- and season 2 onwards all the episodes opened with different versions of the same song, a great watch in themselves: see some of 'em here; it's great fun. The humour is irreverent, occasionally scandalous and frequently even offensive, but then these are all mature adult shows not for the easily shocked. 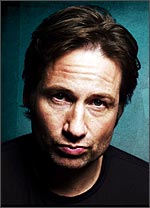 That said, take a bow Californication. David Duchovny of the X-Files stars in this wildly explicit romp about a New York writer filling up his Los Angeles life with a rut of random blondes. Being a sexual conquistador doesn't help him much, though, in terms of getting rid of his writer's block or getting back with his ex-girlfriend (the utterly desirable Natasha McElhone) who's about to marry her new boyfriend.

Careerwise too, it's not the best time. His nihilistic God Hates Us All has been Hollywood-ised into a cheesy Tom-Kat starrer called Crazy Little Thing Called Love, which, much to the writer's loathing, is making money. He hasn't written a new word in months, spends a lot more time pouring out whiskey than actually sitting in front of the keyboard, and can't get his ex (and the precocious daughter he shares custody of with her) out of his obsession space. The language is profane, the nudity is extreme, and the music is classic rock. Check out the blasphemous first five minutes of the show for a taste -- if you dare.

Okay, so I ended up watching all 12 episodes of Californication's first season in one night, leaving me now minus any sort of a TV-fix. If you guys have any suggestions about great TV shows, or comments on these, or just general column ideas or questions, mail me at senterfold@rediffmail.com.