'I will miss you calling me and saying "I am Shashi Kapoor" even when you were at the height of your stardom.'
Gitanjali Gurbaxani remembers a dear friend. IMAGE: Shashi Kapoor with daughter Sanjana at the Prithvi Theatre, May 10, 2015, after he was conferred the Dadasaheb Phalke award. Photograph: Pradeep Bandekar

The last time I met him a couple of months ago, his eyes still didn't lose the mischievous sparkle and that impish smile that played upon his lips despite him suffering from a kidney ailment, undergoing dialysis twice a week, and being wheelchair bound for almost a decade.

He contributed a lot to charity for the underprivileged, one being to a NGO called the Bombay Mothers and Children Welfare Society, where I am a life member on board.

He often interacted with underprivileged children and adults who were suffering from cancer, laughed with them, had fun with them and briefly took away their life of frustration and sorrow by bringing joy, comfort and a positive mindset with his presence, thus creating an empathetic caring relationship that has stayed with these ailing patients till date. He was eager to interact with them and never made a fuss when asked to come to inaugurate the cancer convalescent home at the Dr Mhaskar Hospital in Delisle Road (south central Mumbai) in 1986, the Ajit Shahani diagnostic centre in 1992 and the Lila Shahani Ophthalmic ward in 1998, both in the BDD chawl (south central Mumbai).

He inaugurated many cancer detection camps at our family owned clinic in Colaba (south Mumbai), particularly after the sad demise of his wife Jennifer, as he lost his father and wife to this malady.

Over three-and-a-half decades of our family friendship, he came several times to our clinic in Colaba, to inaugurate medical camps for cancer patients, diabetics, blood donations all that were held for the privileged and the underprivileged. In the 1980s, many major ailments were silent killers as there wasn't much awareness amongst the masses. This was our way -- that of my parents Dr Dolly and the late Dr Govind Gurbaxani -- of getting people from all walks of life to come in for a medical check-up for free, and just his name was enough to draw in a bigger turnout.

He cared for them, listened to them and was happy to join us in creating awareness as he had suffered a personal loss, one that was visible on his face.

To him, it was his way of bringing some light into the lives of common people by interacting with them and sharing anecdotes of his past with wit, that would bring laughter to their lives briefly. He always addressed people -- even younger than him -- with a 'ji' as he felt if you want respect, you have to give it as well. I was addressed as 'Gitanjaliji' by his staff. These are some qualities I have imbibed from him and that have helped me grow as an individual.

The charismatic actor was a family man at home, completely different from the one portrayed of him as a public figure.

He was a private person who could speak at length on anything over cups of coffee and freshly made wafers. A foodie to the core, he relished good food at our home as ours was a family of gourmands. Whenever he came over, we would make Sindhi food for him, one he relished.

From my schoolgoing days to the last few years, I met him often.

Though he kept unwell these last few years, I would go by to see him as he often called me to bake eggless cakes and desserts to be given away to the family and friends. That is my forte, one he patronised for over two-and-a-half decades.

He saw me grow from a schoolgoing child to a well-known foodie, food columnist and cook book author who he was proud of.

You were a suave gentleman to the core -- brilliant, charming and a svelte heart-throb.

I will miss you calling me and saying "I am Shashi Kapoor" even when you were at the height of your stardom.

Gitanjali Gurbaxani is a food consultant, columnist and author, based in Mumbai. 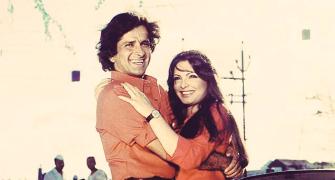 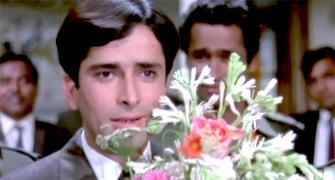 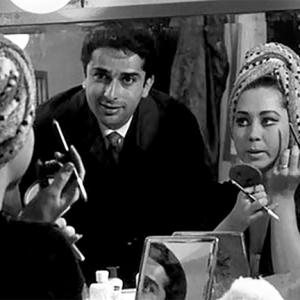 'Shashiji was a class apart'