News
Business
Movies
Sports
Cricket
Get Ahead
Money Tips
Shopping
Sign in  |  Create a Rediffmail account
Rediff.com  » Movies » Lust Stories: Why we should love *this* one

Dibakar Banerjee delivers his finest work to date, and Sreehari Nair makes sure to applaud him. Dibakar Banerjee's section in the hugely entertaining Lust Stories is not just the best short in the anthology, but also the director's finest work to date.

Delicately balancing moral complexity and narrative tension, Banerjee's story goes from being an Emotional Russian Roulette (where two men shoot blanks and Manisha Koirala's Reena fires a live round) to a Vaudeville of Adultery, and it begins with a Deception of the audience.

We watch a couple (Reena and Jaideep Ahlawat's Sudhir) serenading each other on the beach -- with witticisms and epigrams thrown in for good measure.

He taunts her. She laughs.

This is a duo with inside jokes and a talent for completing each other's sentences.

As the action shifts to the beach house, the mating calls begin: That look, that rub of the ankle.

And then they get down to having sex -- it's a middle-aged couple enjoying the fruits of pleasure, and it's not all juicy: He seems to be ploughing through the ritual; she bathes in his sweat.

Banerjee writes and sets up the initial parts naturalistically and Reena and Sudhir's guiltless fun does not prepare us for that phone call: It's a call from Salman (Sanjay Kapoor), Sudhir's best friend, also Reena's husband.

Soon Sudhir and Reena are joined at the beach house by Salman (to discuss his and Reena's marital problems, unaware that the beach house has been the setting for his wife's unfaithfulness) with Reena all ready to unload upon her husband the truth of her affair.

What happens over the next 20 minutes is a debanalising of the most conventional elements of adulterous tales -- with the 'self-serving' husband, the 'sad' wife, and the 'understanding' other man, all losing their adjectives to life.

Dibakar's towering achievement here is that in depicting Salman, Reena, and Sudhir as caught up in the love roundelay, he (Banerjee) slowly takes us closer to each one of them.

Without commenting on what he is showing us or without pushing us this or that way, Banerjee extends the bounds of the three characters; so when they finally step out of the beach house, we know what brought them there and we can lay our bets on where they might be heading to.

Sudhir's the other man, but 'vulturing' seems to come to him almost as a strategy.

If he has found his personal bliss amid Reena and Salman's growing discord, he has also purchased his beach property at a 'good deal', thanks to the separation of the couple who first lived there.

He is a scavenger by spirit, this professional heart surgeon, and he locates his feasts in the carcasses of dead relationships.

What Sudhir is, is the right man at the wrong time.

Banerjee has cast Jaideep Ahlawat as Sudhir not just because he is a brilliant, economical, actor (and Raazi won't really tell you this) but, as it happens, in this world of 'sophisticates', Sudhir's Hindi-coated English must stand out.

Sudhir is dating Reena, Salman's wife, but he also knows he is 'not of their world'.

He feels he is betraying his friend as also his own lowly beginnings.

And in Reena, he finds both delight and subjugation: She gives him the pleasure and activates his complexes.

Sanjay Kapoor's Salman and Koirala's Reena are mismatched in the most poetic way: He lacks emotional memory and she forgets nothing.

If Salman is marooned in the enormous present, Reena is the sum total of her pasts.

Theirs then is not a case of a money-minded husband denying his lonely wife her just desserts, but a rather simple-minded man up against a modern, intelligent woman.

And Salman surely is simple-minded. (Scarily enough, this may even be the reason for his corporate success.)

He likes his movies not open-ended, not in that gray zone, and his inquisitions in life mirror his artistic preferences.

"Then you love me," is Salman's conclusion.

Simple-minded as he may be, Salman trusts his friend Sudhir; and it's also a trust built on feeling superior to Sudhir.

So much so that when Reena tells him that she is dating his friend, Salman is forced to perform the thing he hates: Mental Gymnastics.

Sure Salman trusts Sudhir, but what he trusts most are Reena's 'tastes' -- dating his surgeon friend would be too much of a social climbdown for her.

The simple-minded, somewhat considerate, somewhat flatulent Salman understands that 'If Sudhir knew' that 'Salman knows' that would be enough to enclose the Hindi-accented, guilt-ridden, self-effacing Sudhir in a fresh world of complexes.

And so Salman tells Reena to put her confession in the vault.

But Reena values the strength of her confession. It defines her.

This is her story, and about her search for control. The film is more verbal than visual and the talking carries us along without letting us pause for reflection.

Banerjee doesn't linger, but his characters' each utterance tells us something not just about them, but also about the new rules of mating, the new messinesses of our relationships and in Reena the film introduces a new goddess, a goddess for our time.

And how does Reena take the throne?

By stepping on the toes of our feminists and showing them what traditionalists they actually are.

Feminists are still fighting the battle-of-sexes on the ground of fair play, sound logic, rational thinking and established moral codes -- and a truly modern woman like Reena works outside all such codes.

She is the face of the new empowerment and while claiming equality, she uses every womanly trick to get what she wants and to widen her sphere of influence.

She is not the kind to lapse into self-pity, is quite ready to bend facts, can demand attention, but be unwilling to give it herself, and if her actions seem unfair to you, well, she may even tell you that you are paying for all those 'witches' your grandfathers had burned.

The shocking brilliance of Reena's character and Koirala's vivid performance is that it is completely free of moral barbarianism -- she expresses no fixed moral viewpoints and in doing so, she lays out the new rules of the game. 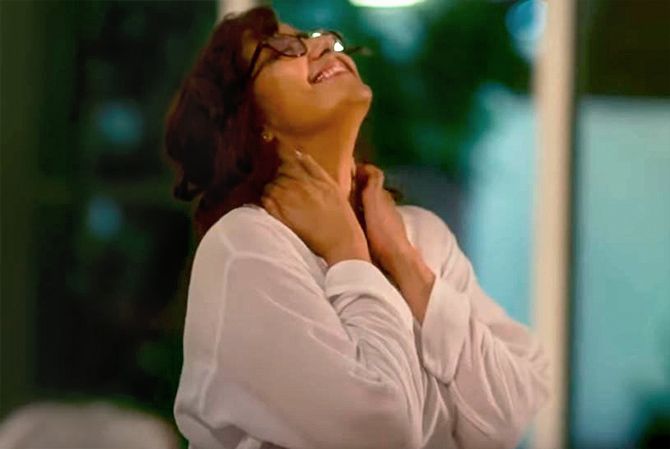 And yet, what makes this a work of art is that Dibakar Banerjee is being impeccably moral here.

Shedding his usual coldness (which has been my gripe with Mr Banerjee: That self-inflicted Kubrickian coldness) Banerjee uses the dimension in which the film is set not to overwhelm you, not to peddle messages, but to dramatise the many contradictions and fracturing in modern relationships, the many secrets he has intercepted behind the vacant-eyed silences, and with a greater degree of openness, he tries to bring to the screen everything he has learnt from life and art.

When Salman and Sudhir sit by the pool trading notes about Reena, they are, with their colliding histories, like Jules and Jim talking about their beloved Catherine.

They both want her (in their separate ways) and yet they know they are not good enough to keep her.

So they talk in half-shouts, whispers and implied phrases.

He, of course, means 'Divorce' and Ahlawat seems taken aback both by the question and the casualness of its phrasing.

Back in college, both Salman and Sudhir wanted Reena, though only the uninhibited Salman could approach her: And this led to her becoming a part of their inner circle.

Reena was the object of their desire because she had the gift of life and because she was a mystery.

Like great artists, she could manipulate a situation by simultaneously being inside and outside it; by being both the player and the spectator.

She could take the 'natural course' with Salman and yet be alert to Sudhir's strong attraction for her, all the while observing their friendship from a distance.

Now, the rigmaroles of life have blunted her appeal and blasted the images of the carefree life she once dreamed of.

Both Salman and Sudhir have settled down, but Reena hasn't.

She demands homage and must have it.

And so, in the closing moments of the film, after she has both her men exactly where she wants them to be, Reena smiles the smile that had presumably drawn Salman and Sudhir to her -- and now that she has the two of them pining for her, like in their college days, her smile is back to being mysterious and self-contained.

Throughout the film, Banerjee summons deep revelations using the smallest of small talk.

As Salman and Reena make their way out of the beach house, the resident cook walks in and Reena compliments her on her fish preparation.

In appreciating the cook, Reena recaps her confession and restates her power-position: That she was there at the beach house with Sudhir and that she need not lie to Salman about it.

And Salman, poor Salman, who can never connect the dots of an emotional affair, needs a better clue to get all that.

This is as much a behavioural comedy, as much a farce of the highest order, as it is a drama.

Though compact in its scale, this short film could mark the beginning of a new approach for Dibakar Banerjee.

Working more generously than ever before, giving his actors more freedom, he has intuited and brought into our bedrooms some fresh truths about our culture, some news about the changing dynamics of modern marriages that is too layered to be reported through a sensational news story.

And in doing this, Banerjee is being a greater feminist than any of them.

Peppered with a wry smile, comes his acknowledgment: This is indeed a woman's world -- a world where adultery ends with the men swallowing their guilt and the woman refreshing her memory of the 'outstanding fish curry' of the night before. 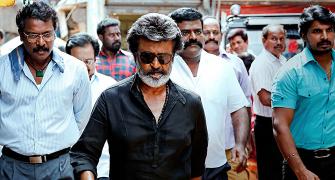 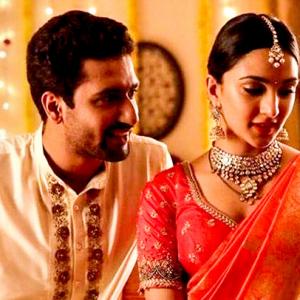