News
Business
Movies
Sports
Cricket
Get Ahead
Money Tips
Shopping
Sign in  |  Create a Rediffmail account
Rediff.com  » Movies » Is Court the most sophisticated Indian film ever? 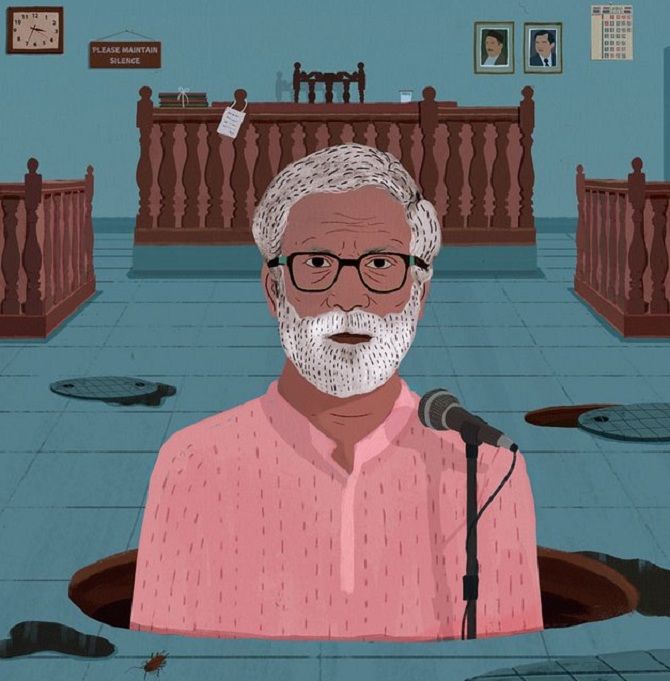 IMAGE: Viewed three years later, the courtroom at the centre of Court seems less like the movie's actual subject, and more like a cauldron for holding its various interlocking forces.
The picture's true concerns, as now evident, are the nature of democracy, and the nature of man.

What do you do about an emotional question that's phrased all technically -- in this case, a question about a dead husband's 'Mental Condition'?

If you're like Sharmila Pawar, you take the question and render it pointless.

Sharmila lives so close to the earth that she can only approximate her own age -- a lawyer prods her, and she settles on the number '30'. It is at this juncture that her powers of spousal psychotherapy are requested for.

'By mental condition, we want to know if your husband was happy or sad -- how was he?'

'He was okay,' Sharmila pronounces her reading, clinically almost.

The inadequacies of our everyday glossaries, and the shallowness of those jargons with which we try to beat one another down, are all laid bare with that one 'okay'.

I don't know anything about actress Usha Bane's resume, but her two scene performance as Sharmila Pawar in Chaitanya Tamhane's Court must surely rank among the greatest cameos of world cinema.

As Tamhane's static camera takes for its subject Bane's face, and as her face follows the courtroom voices, as her eyes break into random distractions, as the matter-of-factness in her replies expose our pretensions, and as the force of her revelations shake the very fundamentals of a system that's out to make her speak, we feel something stinging our unconscious.

By the end of her brief stay, Sharmila Vasudev Pawar goes past her fidgetiness into the realm of myth.

She becomes the wrath of god, of a god very clearly bored of our vanities and egging us on to take off our mascara.

Court is one Indian picture that seems more relevant today than the time it released.

If, in 2014, it was fair to label it a satire on our legal process, three years hence, it has transcended such easy categorisations and turned into the story of our time -- I am perhaps risking superfluousness here, but it may even be the most sophisticated Indian picture ever made.

Tamhane's protagonist, Narayan Kamble (Vira Sathidar), is a 'People's Poet', who swings his shoulders and makes grunting noises, urging his listeners to wake up and take charge.

Kamble's poems, however, are attuned to the bitter truth that accompanies all revolutions: They suggest that to be idealistic in this world is to be constantly disillusioned; that the true revolutionary is doomed to playing the fool's game.

Such dualities and ironies add depth to the picture's basic theme of freedom of speech, and fix the picture outside a specific age or problem. They give it a certain sagely timelessness. 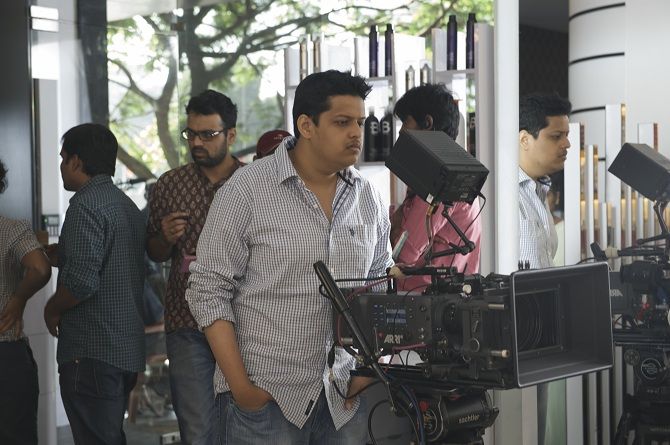 Court was born of a romantic aim.

Tamhane had felt the rumblings of intolerance early in its day and wanted to document how, as a country, we were slowly becoming non-hip about dissent.

If his impulses are that of a liberal out on a limb, Tamhane is also blessed with an artist's mind, which means he thinks about issues for a longer period of time, evaluates his own responses to these issues, and -- in Gatsbian terms -- offers requisite sympathy to all those 'who haven't had the advantages that he has had.'

By overlooking these many layers and reading it as a Straight Liberal Picture ('Golly, those Right Wingers are such pests'), the easy championers of Court may have disappointed its young director as much as the social swine who prompted its conception.

Compare Tamhane's treatment of the Conservatives with, say, Hansal Mehta's, and you get the measure of Tamhane's humanity.

Mehta is convinced of his own Good Taste, and he makes sport of all those at the other end of his taste spectrum.

Tamhane, on the other hand, leads you into these 'other lives' and makes you see them for what they are.

Two contesting lawyers walk out of the same courtroom and step into contrasting lives.

There's the cheese-and-wine buying lawyer Vinay Vora, who lives a life of polish and urbanity: He's defending the People's Poet in a case of abetment of suicide.

There's no money at stake for Vora, but his gallantry can be attributed to the fact that he belongs to a generation that can 'afford' to be socially conscious (Vora's story eerily mirrors that of Vivek Gomber's who plays the character and who's also the producer of Court -- the picture was an artistic risk he could 'afford').

Then there's public prosecutor Nutan (Geetanjali Kulkarni), who boards local trains and who completes her journeys over discussions about multigrain flour and olive oil.

Tamhane carefully shows us how Nutan and Vora express themselves in their private lives.

His jazz is her Sunday afternoon play about immigrant-shaming.

His rich parents' taunts are her concerns about her son's homework.

His friends' bar-room chatter is her whistling cooker.

The lawyers bring these cultural and social hang-ups into the courtroom.

When their respective arguments are over-ruled, she merely pauses and moves to the next one while he, under his breath, mutters the F-word. 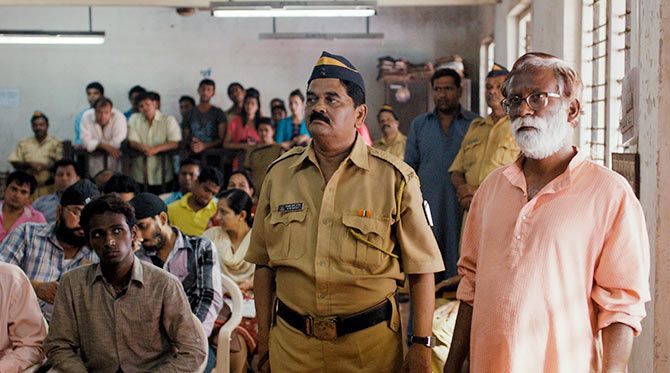 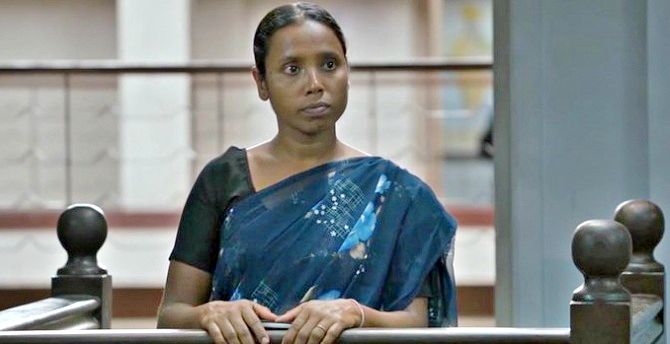 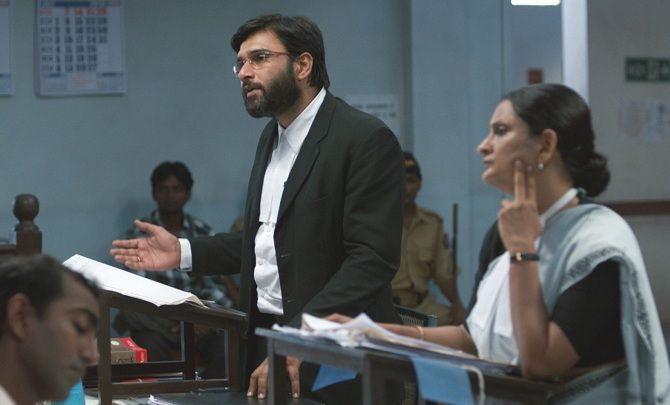 IMAGE: Moments from Court -- the protagonist Narayan Kamble, a folk singer who is on trial for inciting a sewage worker's suicide with his music; Sharmila Pawar, the dead man's wife in a striking cameo; and the two contesting lawyers, whose lives portray the contrasts we live with.

In this muttering is hidden the fundamental liberal frustration of today, the source of which is an inability to respect those who may have tastes and ideologies far different from your own, but whose human intensities are still equal to yours.

As we are talking, the Liberal-Conservative fight across the world is being daunted by the fact that any revolution to the Conservatives will always be shaded by rational concerns, while for a huge percentage of Liberals it offers a supply of unending sensual pleasures.

Tamhane himself may have started on this journey as a frustration-charged liberal (a lot of Vora's guilt and feelings of helplessness, I assume, are Tamhane's own), but by the time he got down to crafting the picture, his natural sympathy had forced him into a Balzacian stance.

'I belong to the Opposition party, which is called Life,' he seems to be saying throughout.

Court even feels like a movie Balzac may have made, and confirming this hypothesis are the subtle links that connect the movie's present to history's biggest shames.

Narayan Kamble's trial, for instance, feels like a restaging of the Trial of Socrates.

If Socrates's were religious mistakes with social implications, Kamble's alleged mistakes are artistic.

If Socrates, it was claimed, had introduced new Gods, Kamble introduces new and frightening ideas.

And like Socrates, Kamble would rather drink the Hemlock than go back on his beliefs -- he plays the fool's game to win it.

If Sharmila Pawar unmasks the fallacies of our Oatmeal Liberalism, Narayan Kamble exposes the innate failings of a Democratic Society.

Democracy is meant to accommodate the worst of human frailties, and yet, as interpreted through the machinations of a courtroom, the rituals of democracy betray no patience for the messiness of life.

Weighed down by executive compulsions, justice is a lost art.

And it's in the most banal sequences of the picture that this reality comes blazing through.

'Statements' are essentially summaries made out of witnesses' garbled, unsure lines.

Questioning is interrupted for documentation purposes.

There's a cold clinicality that has fallen upon the players.

The lawyers compete for tragedy ('Isn't he leading the witness now?' the prosecution lawyer Nutan asks at one point, with great contempt for the word leading).

A judge's efficiency is measured in Verdicts Delivered per Year (it's all high metrics!).

In Tamhane's vision, 'abuse' is a natural feature of the Democratic landscape.

Viewed three years later, the courtroom at the centre of Tamhane's Court seems less like the movie's actual subject, and more like a cauldron for holding its various interlocking forces.

In cinema, unassuming artistry is perhaps the most difficult to achieve; Court is soaked in that achievement. The compositions seem to pop up from the material and faces appear in these compositions like gargoyles.

This is one of the few Indian movies where the principals constantly emerge from a crowd and later blend into the same crowd.

Scenes are set in their everyday randomness before the actors walk into them and moor them cinematically.

We are welcomed into most scenes by a wash of voices, before one voice breaks out and the movie resumes.

The beauty of the performances so achieved is that you aren't aware of them being performances. This technique at once makes the picture seem borrowed from life, and also attests to the director's staunch belief that this is an everyman's tale.

Tamhane is clearly a guy who has smiled at the minor rhythms of life, at life's little paradoxes, and cinema is a great medium for someone who can work up that kind of smile.

In the picture, there are two scenes of arrests, and they're both shot from a distance -- implying that the big political games powering such decisions are often wrenched away from us.

But then there's Sharmila Pawar's scene, later, where, in replying to a question about her husband's (a sewage worker) death she reveals how her husband would throw pebbles inside the gutter and wait for cockroaches to come out.

This is a revelation that happens over a medium shot, a representation of another reality, one that's within our reach, but one that evidently doesn't have the glamour of a big scandal.

The greatest achievement of Tamhane's Court is that it encroaches upon our better-regulated world like a bad dream, and then enlarges the scope of that dream.

The picture leaves us feeling devastated while locating the trigger-switch of that devastation somewhere inside us.

We keep searching for that one judgment, and it comes, only to pronounce us guilty. 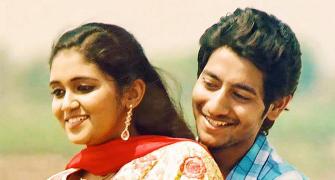 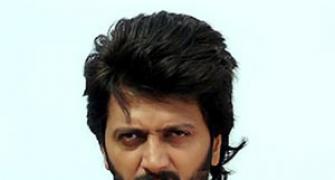 'It's not a fight between Hindi and Marathi cinema' 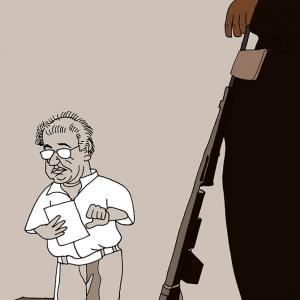 Seasons change, but nothing really moves in the Sheena Bora trial

How Court was selected for the Oscars