Question: Who is Nicolas Cage [Images]? Answer: An Oscar-winning performer formerly known for quirky madcap roles but now a Ferrari-collecting star turning up in utterly braindead films with interchangable plots and hairpieces.

Despite logical inconsistency and much happenstance instead of actual screenwriting, these films do invariably well, being as much about a singular idea -- seeing the future, hunting for treasure, being the devil's bounty hunter -- as they are about the bells and whistles.

Which brings us to Question 2: What is Aa Dekhen Zara [Images]? Answer: It is pretty much exactly like one of those myriad moronic Nicolas Cage actioners, except there isn't a single actual actor to be seen anywhere on the screen.

Don't get me wrong, this isn't necessarily a bad thing. Right from the start of ADZ, we're told that Neil Nitin Mukesh's significantly unemployed photographer Ray has a camera that can take pictures of tomorrow and beyond, and enough jazzy flash cuts are thrown in to ensure we never take the film seriously. It is a pulpy ride, and even if it doesn't make sense, the plot is comicbooky enough. It could even have been fun, if only it wasn't so bleedin' predictable. 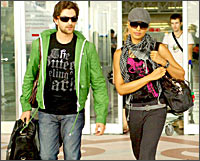 I'm not sure what director Jehangir Surti was trying to achieve with this film utterly lacking in originality or intelligence, but let's assume he tried to make a fun children's movie. Yet this is fantasy by-the-numbers, the script coming together as if assembled by a couple of 14-year-olds who have sneaked a couple of espressos. All the elements you can think of are in place, but nothing connects. Judging by the fact that a couple of 10-year-olds behind me were gleefully predicting every scene ahead, either the film's soothsaying camera is more common than we know or -- and, admittedly more realistically -- the same can be said for the generic plot.

Neil Nitin Mukesh, last glimpsed in the fantastic Johnny Gaddaar, seems to have cleverly picked another character that doesn't require him to act much beyond the fish-out-of-water routine. The first film surrounded him by great actors, this one is meant to move so fast it hides his lack of talent -- but the guy does still come across as likeable. He needs to work on his English delivery, certainly, but there's an affability about him that seems novel in this era of cut-polished heroes packaged as all-rounders. Trading ineptness for charm isn't a trick that lasts long, however, and the pretty boy best learn new tricks, fast. 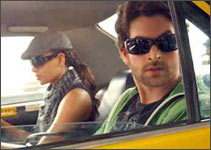 Rahul Dev plays the film's most true-to-comic character, at least in spirit. He's a baddie called Captain, one who shoots casually and sits by the corpse to drink orange juice and picks up a Spider-Man comic before he flees the scene of a grocery store shoot-out. It's campy coolth and the actor is clearly having fun.

The film isn't as kind to Bipasha Basu [Images] -- and vice versa -- who gets to hand in some standard-issue redundance. The best thing about the movie is that it's under two hours long, and while it stretches your suspended-disbelief to zany levels, it doesn't really make you look at your watch.

Question three: Is Aa Dekhen Zara watchable? Answer: Yeah, in the sense that you don't want to strangle people involved in the making, though you could really be doing something else with your life.

Question four: Should you watch it? Answer: Why? Isn't some National Treasure sequel already playing on Star Movies?