A dangerous thief steals important artifacts from museums around the world and the authorities decide to put together a super group of detectives to help find the dangerous criminal who is know only as The Tornado.

The Dream Team of detectives is made up of Briton Pepperidge (Alfred Molina [Images]), Italian Vicenzo (Andy Garcia [Images]), Japanese Kenji (Yuki Matsuzaki) and Sonia (Aishwarya Rai [Images] Bachchan) as the surprise addition to the group because she is an expert who spent four years researching the Tornado for a book she was writing about the master thief. Naturally Inspector Jacques Clouseau (Steve Martin) is chosen as the leader of this team.

What ensues is a comedy of errors and goof-ups that takes the investigators from Paris to Rome, the Vatican and back to Paris, always one step behind The Tornado and always hamstrung by the antics of their silver-haired leader. 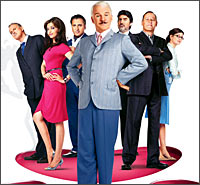 As far as performances go, Garcia seems to have relished playing the Italian Lothario while Molina and John Cleese [Images] are adequately competent in their parts. Matsuzaki and Jean Reno have precious little to do and so they are effectively little more than background noise. Ms Mortimer manages to inject a fair amount of poignancy into her role as Nicole the lovelorn assistant, trying to deliver lines in an accent every bit as ridiculous as the one adopted by the film's leading man. She still comes away with flying colours when compared to the other female character of any importance in the film.

From the very moment her presence is revealed upon the screen, Ms Rai Bachchan's performance grates in every way that it can. It is difficult to decide whether her facial contortions or highly questionable accent are more out of place in a movie as intentionally farcical as this one. Which brings us to Steve Martin, the leading man and co-writer of this second go-around in the updating of the Pink Panther franchise.

In his re-imagining of the bumbling detective made infamous by Peter Sellers, Steve Martin employs every imaginable pratfall designed to elicit a cheap laugh from the audience. In fact he does everything short of falling over clutching a lissome young woman's skirt that promptly rips to reveal a little more than the said lissome young lass was prepared to reveal at that juncture. And one suspects that the only reason such a scene was absent from the movie is because they couldn't figure out where in the narrative to put it.

It must be said that this edition plays a lot smoother than its predecessor and there are a couple of physical gags that utilise fine choreography and dexterous handling of objects to deliver suspense-filled laughs. It might also be possible that the ridiculous idea of an obvious American playing a Frenchman with an impossible accent is not as hard to swallow the second time around.

If cheap laughs and over-the-top antics are your thing, this movie is for you. The rest can wait for the DVD to decide whether our latest acting export to Hollywood will be better than the last one.