Mumbai-based Longines Fernandes has been choreographing for 15 years. He has won many dancing titles over the years. But his biggest reward may have been the moment Danny Boyle [Images] thanked him for his work in Slumdog Millionaire [Images], on the Oscar stage.

Danny had forgotten to credit Longi -- as he is better known -- in the film's titles, which had upset the choreographer, who choreographed the Oscar award-winning song, Jai Ho. At the 81st Annual Academy Awards ceremony on Sunday, Danny especially thanked Longi for his work, making the choreographer's day.

How does it feel to be mentioned and thanked on the Oscar platform by Danny Boyle?

I had tears in my eyes. I was overwhelmed by the magnanimity of Danny. It was completely unexpected. He is a big-hearted man and it feels great to be thanked amidst so many on the Oscar platform.

You weren't mentioned in the film credits. How come?

I was upset about that. When I watched the film at the premiere, I didn't realise my name wasn't mentioned. I thought it must have been a mistake in the reels. My son noticed and told me. The production house learnt of it and said that Danny would give me a letter of apology. Danny then promised that he would make up for it. And he did, in this way. But it was just unexpected.

I was watching the Oscars live -- right from 6:30 am, I was glued to the television. I couldn't believe my ears when I heard Danny mention me. My wife had to actually reassure me that I had heard my name. She was happier. I have no words to explain my excitement.

How did Slumdog happen?

Amar Bhutala, an Indian director, recommended my name to Danny Boyle. I met him, showed him some of my work including the remixed version of Adnan Sami's [Images] Lift Karade and he was impressed. So I got onboard.

How was the experience of working with Danny?

He is wonderful man. He gave me all the freedom I needed. He knows what he wants and how he wants it. He has given a masterpiece.

There were times when I went to him to show what I have done. He would say 'marvellous', 'fantastic'. I wondered if he even paid attention to what I had choreographed. So one day I intentionally gave some wrong moves. Right away Danny told me, "This is not your work. You haven't done a good job. You can do better than this." That is when I realised that he is a keen observer and knows what he wants.

How was the experience choreographing the kids, Dev Patel [Images] and Freida Pinto [Images]?

It was a chaotic experience. It was shot at different locations which were like the extreme ends of the world for me. I live in Andheri [a suburb in Mumbai [Images]] and to travel to either Chembur or Lion's Gate or VT [Victoria Terminus [Images]] was a hassle but I managed.

Honestly, it wasn't easy to make Dev and Freida dance. It was lot more difficult to make Dev dance because he didn't have any background in dance. He always said he was bad at it. He was there only to act so dancing wasn't his forte.

It was easier to work on Freida as she is from Mumbai, and therefore knew how Bollywood worked. Anyway, both had their own restrictions. But they pulled their socks. Dev would never give up. He would ask me to give him one more chance to impress me. I would tell him, "Don't impress me, try and impress yourself."

How was it to shoot in perpetually crowded VT station?

We shot only in the night so the crowd was comparatively manageable. We would shoot from midnight to 4am as the first train starts from 5am onwards. We would shoot for four hours everyday. So it was not that problematic. 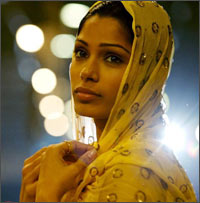 How long did you take to finish the Jai Ho song?

Three days. I had a 15-day training with Dev and Freida like I do with all my dancers. Once I had trained them it was easy to shoot.

How long did it take for the other songs?

I did the whole movie in bits and pieces so I don't exactly remember how long I took to work on the other songs.

How difficult or easy was it to train Dev and Freida?

Honestly? Not easy. I think there are two types of choreographers -- intelligent and good. I come under the intelligent category. Once you have trained your dancers they just need to repeat the same steps in front of the camera.

Why didn't you go to the Oscars?

I couldn't go because I am busy with a new film by the same producers of Slumdog called Bollywood Hero. We had started work on the movie on February 14, so I couldn't go. I would have loved to go. Who wouldn't?

How do you feel now after gaining so much recognition?

I am glad for all the accolades. I got my first recognition when I won Jhalak Diklaja. I feel the same excitement now.

Talking about Jhalak, how did your life change since then?

Honestly, from a choreographer I became a popular choreographer. That is all. I never thought television would bring me so much popularity. I have been dancing and choreographing for more than 15 years. And now at 40, I am getting all the recognition. I am happy. Better late than never. I am also happy for my son who is proud of me. It had made a huge difference to him. My nephews are in awe of me.

What is your wish for the Slumdog team?

I wish more such laurels for everyone.

What's your style of dances?

I do freestyle, western, salsa, jive, jazz, street, hip-hop and Bollywood style. My ideal dancing style is the one Amitabh Bachchan [Images] did in Khaike Paan Banaraswala from Don. Dancing for me is wholesome entertainment and I am a wholesome entertainer.

There is no turning back. It has taken me so long to get here. I will continue the hard work and stay grounded.