It is time for another morality lesson, courtesy Madhur Bhandarkar, and unless you've been living under a rock with dark glasses on, the promos, articles and posters have let you know that this time the 'realistic' director's gaze has been trained on the morally corrupt world of Fashion.

The story is about one Meghna Mathur (Priyanka Chopra [Images] in an awards-baiting performance) from Chandigarh, who harbours dreams of becoming a model, nay supermodel, after she wins a local beauty contest. She wants to leave her idyllic hometown lifestyle for dreamtown Mumbai's glitz and glamour. Though her father (Raj Babbar) expresses reservations, she heads out to live with a relative and chase her dreams of becoming a model.

Along the way, we encounter the clich�s that surround an up-and-coming model in her struggle to reach the top -- the gay friend who is also assistant to a famous designer; the teetering-off-the-rails star (Kangana Ranaut [Images]) whose place the leading lady will take someday; the good-hearted tough-chick model (Mugdha Godse) who will befriend our heroine and help her navigate through the treacherous underbelly of a struggling model's existence; the fellow struggler (Arjan Bawa) whom she will befriend, love and lose; the head of a modelling agency (Kitu Gidwani) who will give her a break and then help break her. And of course, the tycoon (Arbaaz Khan [Images]) who will enable her to achieve her dreams only to turn into her worst nightmare. Through it all, over a running time of nearly three hours, the manga-faced leading lady will strut, pout, pirouette and look like a holocaust survivor with the straightest hair in the world. 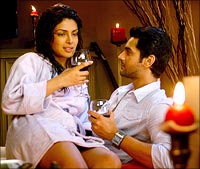 Does that sound like fun? No? Perhaps, that's because the storytelling team behind this opus somehow manages to make the entire Lord of the Rings trilogy feel like a short film in comparison. And they manage this by sucking out any genuine drama or possibility for empathizing with the lead character.

From her origins in Chandigarh to her scaling the heights of fashion achievement, it never seems like Meghna Mathur ever really struggles. Her hair and makeup when she is a small town girl are not that different from when she becomes the biggest name in fashion. Her clothes seem just as ambitious when she is a 'nobody' as when she turns into a 'somebody'. She leaves (or gets thrown out of) homes to have no trouble finding somebody else to put a roof over her head. She rides roughshod over those that treated her with kindness and they immediately forgive her when she shows the first half-hearted sign of being apologetic.

Of the three girls on the posters for this film, Kangana brings the right amount of derangement to her character of a girl on the edge, just waiting for someone to push her over. However, her character is little more than a series of hastily-penned clich�s and she is forced to mouth dialogue so trite there is no way she (or anyone else) could do justice to it. As long as she is acting physically, she is fine, especially in the much-ballyhooed 'wardrobe malfunction' scene, and the rest of it is probably not her fault alone.

Mugdha Godse, as Janet Sequeira, is a revelation. Dodgy dialogue delivery dogs her performance as well but she brings an easy comfort to her role as the street-savvy but far from cutthroat model. In the sacrifices she makes and the grace she exhibits under pressure, hers is one of the few characters in this movie that could earn some empathy from audiences. 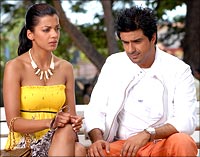 Which brings us to Priyanka Chopra, the leading lady and the lynchpin of this whole exercise. Now either Ms Chopra has learnt a few new tricks (as far as performance goes) since her last few outings or she really is Meghna Mathur (temperament wise) and was relieved to finally be able to play herself on screen. I suspect the truth lies somewhere in between.

All those news items about the other girls feeling like they didn't get their due in the promotions for this movie, that is all nonsense. This is Priyanka Chopra's movie, through and through; she is probably on screen for at least 90 percent of the film's duration and though she makes the character believable, she never succeeds in helping us identify with her.

Fashion feels like a story that has been told by someone with minimal first-hand experience of the world. Sure there are anecdotal references (claims of design theft, the drugs, the promiscuity, the homosexuality, the incessant smoking and drinking), but it never feels like this is what it must really be like, behind the scenes in the fashion world. This is a work of fiction all right, and the fiction in this case is a loosely tied together, paint-by-numbers tale that purports to be an insightful look behind the gauze curtain.

In the final analysis, Fashion seems to be telling us that a driven, career-oriented woman is destined to be alone and suffer all manner of indignities if a good man (her father, her boyfriend, her friend's husband) isn't around to rescue her or to place her on the right path when she loses her way. It also seems to say that the only way to be happy is to never become truly successful. Oh yes, it also lectures that true success makes a person arrogant and unlikeable -- thereby paving the path for future failure and disgrace. Now really, is that the kind of entertainment you feel like consuming during the festive week?