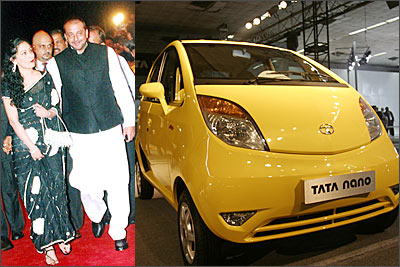 Industrialist Ratan Tata may have found his brand ambassador for the new Tata car, Nano, priced at Rs 1 lakh.

Sanjay Dutt [Images] told reporters at an Auto Expo car event in New Delhi that he will gift the Nano to his girlfriend, Manyata (inset).

Dutt was clearly impressed by the small car, and chose it over a Rs 4 crore car -- the Ambierod luxury car, which was launched at the Auto Expo, by his close friend and ace car designer Dilip Chhabria.

The actor has always loved his cars. Among the cars that he has been seen in are Ferrari [Images], Lexus, Toyota Innova, Honda and a Harley Davidson motorbike.