Newcomer Anushka Sharma has much in common with Deepika Padukone [Images]. Both are Bengaluru [Images] girls, both have been models, and both have made their debuts with Shah Rukh Khan [Images] -- Anushka in Rab Ne Bana Di Jodi and Deepika in Om Shanti Om [Images].

As Anushka steps into the big league this Friday, her friends and colleagues think back. Kannada actress Andrita Ray remembers Anushka as a soft-spoken girl, who made a mark in her modelling career. "She could be noticed even in a crowd. Though I did not interact with her often, I was happy to see her getting such a big break," she says.

"Anushka's grand entry to Bollywood is certainly an encouraging development for struggling models in Bangalore. I feel happy that more and more Bangalore girls are making it big in Bollywood and other film industries, besides the Kannada film industry," continues Andrita, who is presently shooting for Vaayu Puthra in Dubai. 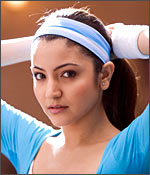 Both Andrita and Anushka studied in Mount Carmel College, where the latter graduated in Economics.
Her teachers are surprised that Anushka opted for a career in films, she was was very inclined towards studies in college. Some of her classmates even say that Anushka wanted to persue higher studies in Economics. "She had told us that she would be taking up civil service examinations," says her friend Margaret.
Well known fashion guru Prasad Bidapa, who has groomed many models and actors including Deepika, says that he had an inkling that Anushka would achieve something big in the glamour world.
"Anushka was just 14 when she came to my office with her parents," he says. "Her parents wanted Anushka to be a model. When parents are so keen on seeing their child in the fashion world, it is natural for any youngster to show interest in knowing more. I made sure that she was part of many of my shows. She used to walk on the ramp perfectly. She was a good learner and worked hard to come on top. It did not surprise me when she got such a good opportunity in Bollywood."