Commercial banks, both private and public sector, usually move together. Rates of interest charged on loans of similar tenure differ by barely 25 basis points, if at all, and the story is the same as far as deposits go. So, is there any bank that does not follow the pattern?

Your search for cheaper loans and higher interest deposits could end at an urban cooperative bank (UCB). The difference may not only be in rates, but also in the terms, which could make dealing with such banks less burdensome at a time when interest rates are rising by the month.

Consumers are already rediscovering UCBs. Over the last few years, some of them, such as the Mumbai-based Saraswat Cooperative Bank and Jankalyan Sahakari Bank, have been growing steadily. Today, they are operating more and more like any other modern bank -- setting up ATMs and designing banking hours to suit the schedule of busy officegoers.

While this was happening, the Reserve Bank of India (RBI) was trying to bring them under tighter control. Since 2004, as a result of the central bank's initiative, UCBs have become much safer outfits to deal with.

So, it makes better sense to bank with UCBs today, what with the rates some offer being the best in the industry. And with the risk of a run minimised, they are almost on an equal footing with commercial banks when it comes to vying for your attention. What should you look at UCBs for? To answer that question, we will have to take up customer needs one at a time.

According to the Reserve Bank of India's Report on Trends and Progress of Banking in India, 2005-06, at the end of March 2006, there were 1,853 urban cooperative banks in the country. Of them, 55 were scheduled and the rest non-scheduled. They had 7,217 branches and 101 extension counters. 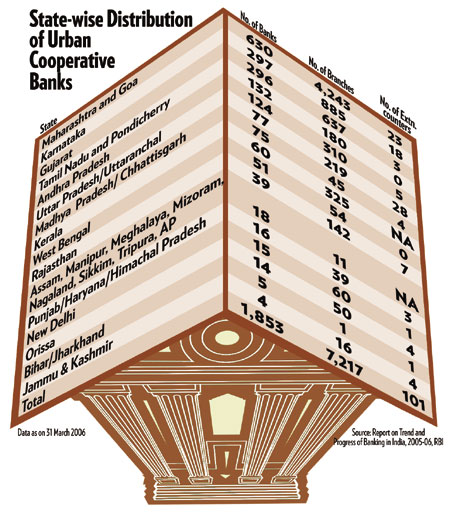 Money in the bank

Next comes the question of having deposits in UCBs.

Savings accounts. Broadly, the case for opening a savings account is not very strong. Urban cooperative banks will pay you an interest of 3.5 per cent on your balance -- same as any other commercial bank. And even though the best of them are installing ATMs in major cities, you will have to forego the convenience of accessing your account in any part of the country through nationwide networks.

Fixed deposits (FDs). Here the story takes a different turn. More often than not, your money will earn higher interest in a cooperative bank than any other (see Interest Rates: How They Stack Up). But, rates of interest will differ from bank to bank -- the same as any other commercial banks. So you will have to shop around for higher rates.

The Deposit Insurance and Credit Guarantee Corporation (DICGC) insures deposits of up to Rs 1 lakh (Rs 100,000) for individuals if a bank goes into liquidation.

Earlier, a person having an FD of Rs 1 lakh as the first holder and a second FD of Rs 1 lakh as the second holder was insured only for Rs 1 lakh. But now the rules have been changed to include joint deposits in the same bank and these are treated as separate FDs and each holder is insured. It is mandatory for all UCBs to insure their deposits with the DICGC.

However, there have also been cases where people have failed to get their money back. Take the case of 57-year-old Balkrishna Mehta. Eight years ago he had made a 5-year fixed deposit at 14 per cent in the Cooperative Bank of Ahmedabad. He was to get Rs 1 lakh on maturity. But just before the deposit was to mature, the bank shut down. Recently, three years after it became due, he has "managed to get only Rs 70,000."

D Krishna is the managing director of National Federation of UCBs (Nafcub). He admits that even now there are delays before a depositor gets his share from DICGC. "We are working out a system with the RBI, wherein these delays would be minimised," he says.

Besides, Mehta could not use the insurance cover as the fixed deposit was in the name of his proprietary concern, whereas the DICGC insurance is only for individuals. So, if you do make a deposit, do not cross the Rs 1 lakh limit and make it in the name of an individual. That will ensure a fair degree of safety.

Krishna also points out the difference between closure and liquidation. He says: "There are banks which have been closed down and taken over by bigger banks, or they are under the directive of RBI. But that does not mean that depositors are eligible for the insurance cover from DICGC." It comes into effect only if a bank is under liquidation.

More than the depositor, it is the borrower who stands to gain from a UCB.

Interest rates. To begin with, the rates of interest charged are in many cases lower than those charged by commercial banks for similar loans (See below: Interest Rates: How They Stack Up). For instance, Jankalyan Sahakari Bank will charge you interest at 10.50 per cent on a housing loan for five years or more.

Borrowing terms. The criteria for getting a loan from a UCB are less stringent than for a loan from a commercial bank. For instance, when taking an education loan, it does not matter whether the course you are going for is recognised or not.

For taking a loan, one is required to become a member of the bank. That means he has to own shares of the bank worth at least 2.5 per cent of the loan amount or a maximum of Rs 25,000. Exception to this rule is made if the borrowing is against the banks' own term deposits, surrender value of life insurance cover, National Savings Certificates, Kisan Vikas Patras, or RBI Bonds. The collateral required is close to 100 per cent for most loans other than education loans above Rs 50,000.

Also, some private banks today offer loans without security and compensate it with a higher interest rate. A UCB would not. Uday Bhaskar, 40, took a Rs 3-lakh (Rs 300,000) loan at 13 per cent from Bharat Cooperative Bank for renovating his house. He has a good repayment record.

"In other banks, when you take a loan for the second or third time, and if you have a clean record, they would not require very stringent documentation and may also do away with a part of the collateral," he says.

No such luck here. Not only does one need to resubmit all his papers, but also provide full security each time.

So, if you cannot put up sufficient collateral, it will be almost useless appro-aching a UCB for a loan. The loan is required to have two guarantors who need to be members or nominal members. A person is charged Rs 10-50 to become a nominal member.

Cooperative banks have other limitations as well. For instance, you can only use the services of a bank that is in a city in which you stay. It may be difficult for some smaller cooperative banks to allow international or inter-state money transfers. Only if the bank has a tie-up with a private or nationalised bank which has a national network is it possible to facilitate this service.

Suppose your EMI payment becomes due on the 1st of every month. Assume you find yourself with enough cash to pay such an EMI on the 10th of the previous month and, therefore, make the payment.

Under the daily reducing balance method, your principal will stand reduced from the 11th itself, 20 days before it is due. In a commercial bank, the reduction would have been made only on the due date. So, for a loan from a UCB, you can reduce your interest burden and, hence, the tenor of the loan can actually reduce.

Besides, cooperative banks usually offer an incentive of 1 per cent for prepayment of a loan, unlike most private banks that charge a penalty for the same. "Assuming that 50 per cent of the loan is prepaid, the impact could be anywhere between 0.25 and 0.50 per cent of the total loan amount," says Arjun Gupta, a Mumbai-based financial planner.

"In a rising interest rate scenario, it would make sense to take a loan from a cooperative bank," he says. If the interest rate becomes prohibitively expensive, you can prepay the loan and get a prepayment incentive for doing so. Gupta says that for a 10-year loan, you could be better off by 1.7-2.5 per cent for the life of the loan.

Personal touch. Saraswat Cooperative Bank general manager P.G. Kamath says that the biggest benefit is the personal touch that you get here. "Decision-making in cooperative banks is quicker and bonding between the bankers and the clients is very strong."

Bhaskar is so happy with the way his loan has worked that he is now planning to finance his business venture through the UCB. "I have taken loans from other private banks, but I feel that here the staff is very helpful, and that too throughout the tenure of the loan," he says. "In private banks, the staff would take interest only during the initial transaction."

Borrowing blunder. While cooperative banks do give some comfort, they should only be accounted for after a check on the bank's fundamentals. Take the case of Swami Iyer (name changed), 55, who owns a small medicine shop.

Iyer's overdraft was against hypothecation of stock and mortgage of property. Since the bank was superseded, every cheque he has drawn has bounced. "My image in the market was ruined and none of the suppliers were willing to supply me goods," he rues.

How to choose your bank

Till a few years ago, UCBs were not strictly monitored, what with two regulators in the RBI and the Registrar of Cooperative Societies. But now the RBI has clamped down.

It has signed MoUs with 11 states to set up task forces on UCBs to work with the registrars on remedial action and take the tough decisions on the structure. It has also put a limit of "15 per cent of the own funds of the bank" for loans to one borrower group, making it difficult for the banks to give a huge loan to one entity and compromise its stability, as was happening earlier.

According to the RBI, cooperative banks are intended primarily for members and all financial information pertaining to the bank is required to be made available to them.

In addition, according to the existing regulations, a bank is required to publish its balance sheet in a newspaper in circulation in the main area of operations of the bank. They are also required to place their annual accounts before the annual general meeting. Certain minimum disclosures have been prescribed by RBI. All this information can be used by public in making investment decision.

Ultimately, the bank customer has to make his or her own choice, depending on which the bank offers the most suitable product. UCBs should be able to render efficient service to their members, says RBI.

The apex bank has taken and is taking steps for improving the overall strength of the sector. While the RBI is doing its bit, it says you should also run the following checks to ensure that your experience is more like Bhaskar's than Iyer's.