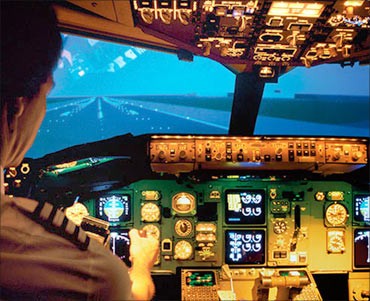 News about a note by Kingfisher Airlines' auditors in the 2010-11 annual report about the state of company finances saw the scrip lose five per cent intra-day on Thursday before recovering a tad.

This adds to the stock's overall decline (down a total of 10 per cent) over the past week, consequent to fears that a rise in aviation turbine fuel (ATF) prices, a weakening rupee and rising competitive pressures could lead to a further deterioration of its finances.

The auditors have indicated that the company's ability to continue as a going concern, given that its net worth has eroded, depends on its ability to bring requisite funds to meet obligations.

However, the management says lenders have independently assessed and found the airline to be viable as a going concern. The company has also said that while there have been delays in statutory payments during 2010-11, no dues as on date are unpaid. 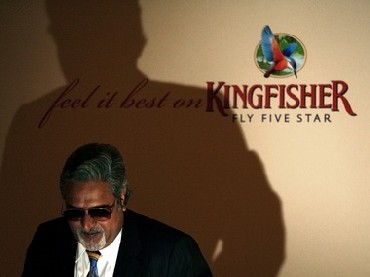 The key trigger for the stock going ahead will be its ability to raise Rs 2,000 crore (Rs 20 billion) from a rights issue.

The company has not been successful in the past in raising money through a global depository receipts (GDR) issue to reduce its Rs 7,000-crore (Rs 70-billion) debt.

Analysts say that investors should refrain from taking exposure to Kingfisher Airlines in the backdrop of a price war, fuel price rises and high accumulated losses. 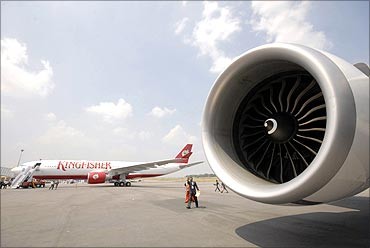 Aviation stocks fell one to two per cent on Wednesday on reports that oil companies were planning to hike ATF prices by Rs 1,250 a kilolitre or 2.2 per cent.

While higher costs are an issue, analysts such as Sharan Lillaney of Angel Broking believe the key problem for the sector is irrational pricing.

Carriers such as Air India have been cutting prices with a view to increasing load factors. With fuel costs going up, the airlines are caught between a rock and a hard place.

"Airlines such as Kingfisher need the cash flows to clear their oil dues and interest costs. The problem they face is that if they increase prices, load factors may fall sharply which might negate the revenue increase and put further pressure on profitability," says an analyst. 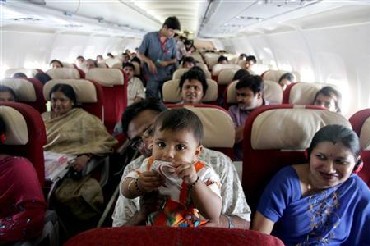 Thus far, attractive pricing, capacity addition and passenger growth has helped Kingfisher maintain its domestic load factors at 79-88 per cent for the first seven months of this calendar year.

In fact, in the June quarter, the airline increased its average load factor by 400 basis points to 85 per cent, as compared to a 300 basis points drop in the metric for the sector to 78 per cent.

While demand seems to be stable, high fuel costs have dented profitability. For the June quarter, the company reported a Rs 264 crore (Rs 2.64 billion) loss as compared to one of Rs 187 crore (Rs 1.87 billion) in the year-ago quarter. 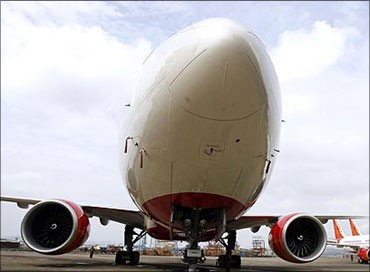 It is the performance at the net level that prompted the auditors to remark that the company's accumulated losses at the end of the financial year (FY11) were more than half its net worth.

While it is unlikely to report net profits any time soon, improvement in profitability at the operating level, according to the company, is likely to be driven by capacity addition through phased recovery of grounded aircraft, growth of premium traffic, higher yields and a focused cost reduction plan.

While operating metrics are improving, its plan to raise Rs 2,000 crore (Rs 20 billion) of funds by way of a rights issue to retire debt is critical for survival. 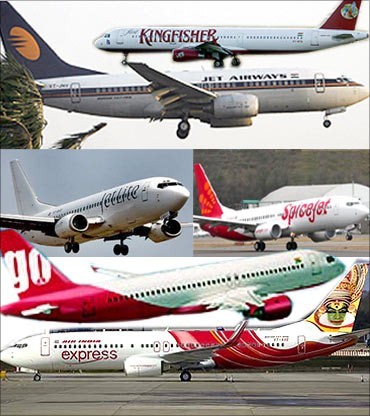 However, analysts are sceptical whether the company will make any headway in current market conditions.

While September is likely to be a weak month, demand in the first half of the year has been robust.

Due to additional seats, each of the three months of the June quarter saw supply outstripping demand. If this continues, it would hurt the pricing power of airlines.