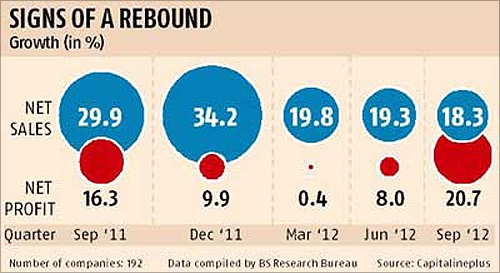 India Inc is set to turn in a handsome performance in the quarter ended September, if the early trend persists.

An analysis of the 192 early birds (including banks and financial services companies) shows net profit has risen 20.7 per cent year-on-year, the best growth seen in the past four quarters.

However, sales growth at 18.3 per cent was slightly lower than the 19-20 per cent seen in the previous two quarters. 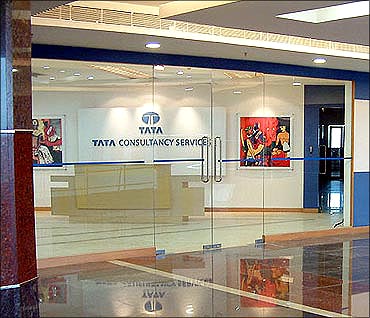 The sample, however, is still small as it includes only six of the 30 Sensex companies - Infosys, Reliance Industries, HDFC Bank, TCS, ITC and Bajaj Auto - that have declared results so far.

These 192 companies together accounted for 25 per cent of the total market capitalisation of the Bombay Stock Exchange.

Operationally, profit margins of manufacturing companies fell to 18.5 per cent from 19.5 per cent in the year-ago quarter. That's because raw material costs of these companies rose 21 per cent.

Given the benign demand environment, it hasn't been easy for companies to pass on the increase in costs to consumers, which is reflecting on their profit margins. The good part is the escalation in raw material costs is subsiding due to softening of commodity prices.

At the net level though, the 192 companies have posted better-than-expected profit growth during the quarter, thanks to rupee appreciation (read: forex gains) and slower growth in interest costs (up one per cent versus 18 per cent sales growth for manufacturing companies).

If one excludes Reliance Industries (RIL), the performance is even better, with net profit growth of 30 per cent and sales growth of 20 per cent. RIL, India's highest valued company, accounts for one-fourth of the total sample net profit.

"After a steady decline over five quarters through December 2011, profitability has begun to pick up again in the last two quarters and is expected to increase somewhat. This is primarily on account of softening in commodity prices and interest rates, and bottoming out of the growth slowdown," according to rating agency CRISIL.

CRISIL, however, believes there is limited risk of any further decline in corporate margins in the coming quarters, given the softening of commodity prices, supported by an appreciating rupee and decline in interest rates.

Mid-sized and small companies such as Dish TV, Indo Rama Synthetics, Indian Metals and Ferro Alloys and Heidelberg Cement have done better by reporting profits against losses in the previous year's quarter, while Shree Cement, Karnataka Bank, GMDC, Essar Ports and Sintex Industries have posted a stellar performance by reporting over 75 per cent growth in aggregate net profit. 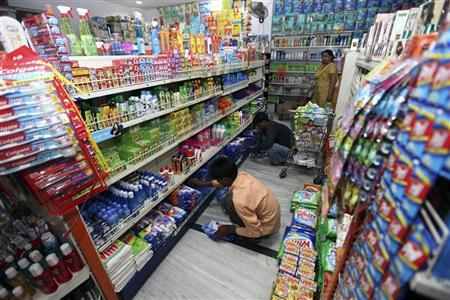 IT companies have reported a robust 32 per cent profit growth on the back of strong performances by TCS and HCL Technologies, due to rupee appreciation and robust dollar revenue growth on account of new deal signings. 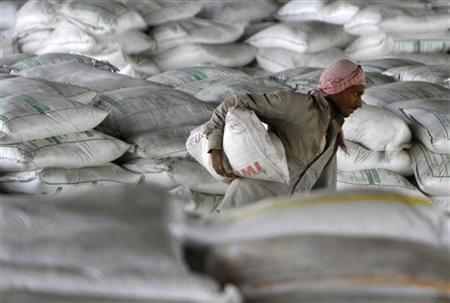 "Cement demand is likely to grow over eight per cent linked to the government's focus on infrastructure development; however, the surplus scenario is expected to continue over the next three years," according to UltraTech Cement.

Five private banks, which have declared results so far, have posted an average 30 per cent jump in net profit on the back of higher growth in the retail loan book.

NIMs (net interest margins) were relatively better, while the uptrend in NPAs (non-performing assets) is showing signs of tapering.