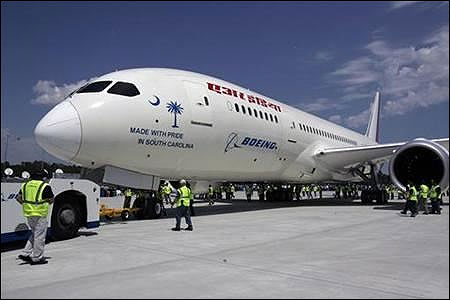 Now, you can fly to London on a Dreamliner.For all those who are planning to go to London, there is a new brand Dreamliner set to be introduced from next week.Air India is about to start a Mumbai-London flight with B-787.It has already deployed Dreamliner on Frankfurt and Dubai route.

Dreamliner is a 256 seater plane with 18 business class seats and 238 economy class seats.

Otherwise, AI has deployed long-haul aircraft Boeing 777 on middle haul routes which include flying to London, Frankfurt,Tokyo, Seoul and Shanghai. As the delivery of Dreamliner was delayed by 3 years, Air India didn't have any middle-haul aircraft and instead had to push into service 20 new 777s.

Aviation experts believe that 777 s are basically fuel guzzlers. It is typically a long- haul aircraft optimised for flights of over 15 hours. Dreamliner is around 25 per cent more fuel efficient and is about 112 tonnes lighter than 777.

With Dreamliners, Air India seeks to address the mismatch of aircraft and routes.Otherwise, Air India was deploying aircraft meant for short-hauls on middle-haul routes in south East Asia as well as West Asia.