Bangladesh government on Wednesday said it was looking for ways for an amicable settlement of the issue of Nobel Laureate Muhammad Yunus's controversial removal from Grameen Bank last month. 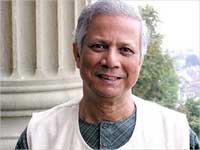 "A proposal for the compromise was offered at the very beginning of the issue and we still looks for the opportunity," Finance Minister AMA Muhith said in a statement.

He, however, rejected reports that a committee was constituted for the negotiation.

Last month, the government had dismissed 70-year-old Yunus, who won the 2006 Nobel Peace Prize, from the microcredit bank he founded. He has challenged the move in the country's Supreme Court.

The minister said Yunus himself would have to "extend his hands first" for the negotiation as international development partners including the US visibly rallied their strong support behind him since his removal last month.

But a highly placed source familiar with the situation told PTI, preferring anonymity, the negotiation process was
already underway and "smokes have been removed to a large extent".

"The negotiation process begun as both the parties were convinced that they needed to reach a compromise for the benefit of government and the Grameen Bank," said the source who is close both to Yunus and the government of Prime Minister Sheikh Hasina.

The comments came a day after former World Bank President James Wolfensohn, known for his closeness with Yunus, held a meeting with Bangladesh Bank Governor Atiur Rahman but the sources said the negotiations between the government and Yunus's representatives began as their initial talks removed largely the "complicities of the issue".

Meanwhile, the US today warned that its relations with Dhaka could be exposed to threats unless Hasina's government reached a compromise with Yunus.

"If there is no compromise, it will have an effect on our bilateral relations," US Assistant Secretary of State Robert Blake told newsmen at the fag end of his five-day visit to Bangladesh during which he met Prime Minister Sheikh Hasina and several other senior government leaders.

The US said the planed "potential visit" of secretary of state Hillary Clinton to Dhaka would depend on a "successful negotiation" on the issue arisen out after the removal of Yunus from his position as the Grameen Bank managing director under a Bangladesh bank decision.

Blake, however, said Washington was "very hopeful that a compromise can be reached to the satisfaction of all parties" to ensure the effectiveness and the integrity of Grameen Bank. 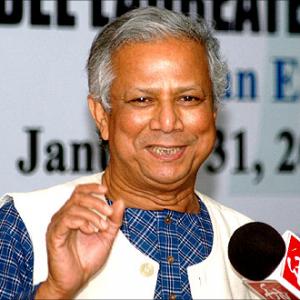 Yunus on why he was sacked as Grameen Bank MD 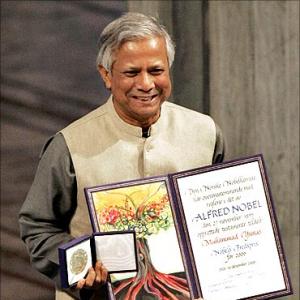 Why Yunus was sacked as Grameen Bank MD