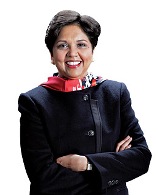 Food and beverages maker PepsiCo and software manufacturer Adobe Systems have made it to the list of world's most ethical companies for this year which are led by CEOs of Indian origin.

PepsiCo and Adobe Systems are headed by Indian origin chief executives Indra Nooyi and Shantanu Narayen, respectively. Both the companies have cornered a place in the list of 100 most ethical companies for 2010, as per the report by a research-based Ethisphere Institute.

However, no Indian company has found a place in the list, which is dominated by Amercian companies. Debt-ridden Hartford Financial Services have also made it to the list, which was earlier headed by India-origin chief Ramani Ayer.

He left Hartford Financial Services in June last year after serving for 12 years. According to the report, the world's most ethical company designation is awarded to those firms that have leading ethics and compliance programmes, compared to their industry peers.

Interestingly, the companies that have secured a berth on the list are from wide range of industries, right from banking to consumer goods to auto, retail and media.

Meanwhile, global consulting and outsourcing firm Accenture, which has ended its sponsorship of Tiger Woods also found a place on the list.

"Of these companies (100), 26 are new to the list in 2010 and 24 companies dropped off from the 2009 list. These 'drop offs' generally occurred because of litigation and ethics violations, as well as increased competition from within their industry," Ethisphere Institute said.