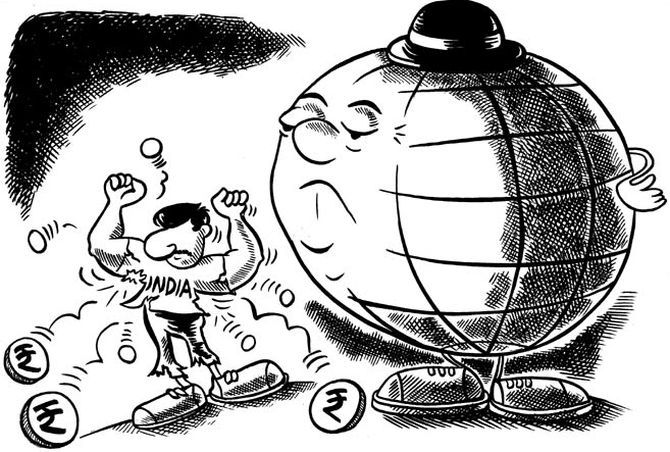 The rupee touched its record low of 69.10 a dollar in morning trades on Thursday amid a sharp spike in crude oil prices, while the markets are convinced that 70 a dollar levels are not too far away for the local currency.

The rupee would have depreciated even more, but for intervention from the Reserve Bank of India (RBI), which managed to strengthen the currency to its close at 68.7950 a dollar, a level last seen on August 28, 2013, which was the rupee’s last record close.

The market has now gone ‘long’ on the dollar and a new record close could be expected this week.

The immediate concern for the rupee is the sharp spike in oil prices.

In just one week, Brent crude has jumped from $72.5 per barrel to $77.3 per barrel in response to the US sanctions on Iranian oil and other oil producing nations keeping their output flat.

The tariff war led by the US has also given rise to concerns of safe haven fears.

This has led to outflows from emerging markets (EMs), including India. So far this year, around $7 billion of funds have flowed out of India.

“India is caught in a double whammy for sure. You can adjust to most other factors, but the rising crude oil prices are a straight hit for India. The issue is you have to let your currency depreciate when others in the region are witnessing such falls,” said Aman Mahna, senior currency trader at FirstRand bank.

The rupee has depreciated the most in the region, falling 7.3 per cent year-to-date.

However, almost all countries in Asia and in the EMs are letting their currencies depreciate to protect their export competitiveness.

The Chinese yuan fell to its record low against the US dollar and has been falling for the past 10 trading sessions to accommodate the sanctions imposed by the US on Chinese goods.

Considering China’s presence in interconnected global trade, if the country gets affected, others will have a contagion effect as well, say economists.

That contagion again pushes investors towards dollar assets, considered the safest asset classes. The dollar strengthens even further as a result.

The dollar index, which measures the greenback’s strength against major currencies, is up 3.34 per cent in a year to 95.2 levels.

The dollar’s strength automatically pushes down the Indian rupee, which runs deficits in its current account and fiscal side.

However, one good thing going for the country is that its dollar dependency is marginal, and so India should not get affected as much as other countries in the region that has attracted a considerable amount of dollar investments in their local asset classes, say economists.

“India’s limited external vulnerability is supported by a large and relatively stable domestic financing base for government debt, which contributes to the economy’s resilience by sheltering it from abrupt changes in external financing conditions,” said rating agency Moody’s.

Policymakers in countries such as India and Indonesia (both run twin deficits), are now facing the classic “impossible trinity”, which is to manage exchange rate, allowing free capital movement, and also run an independent monetary policy, said Radhika Rao, economist at DBS Bank.

“Apart from letting the currencies adjust to the escalation in global volatility, we reckon that the respective central banks will turn sensitive to the outsized risk from capital outflows and financial stability, irrespective of the outright inflation-targeting mandate,” said Rao.

What this means is that the RBI may go for more aggressive rate hikes, 25-50 basis points for the rest of the year, and at the same time engage in currency intervention.

As selling dollars in the market means removing rupee liquidity, the central bank would be compelled to buy back more bonds from the secondary market to infuse durable liquidity, Rao said.

DBS Bank expects the rupee to hit 71 a dollar. Barclays PLC expects the local currency to go to 72.

With the rupee hitting its record lows, the local currency is in uncharted territory that typically gets treated by investors going long on dollar.

What this simply means is that people take bets on dollars not only for spot, but over a longer period horizon.

Typically, to break this, the central bank takes an equal opposite position in the forwards market.

The central bank did intervene in the currency markets on Wednesday. The closing level, which was around record closing lows earlier, may suggest that the RBI is okay if the rupee breaches record lows.

The central bank has time and again signalled it would not let the rupee cross its all-time low, which was 68.87 a dollar until now, under normal circumstances.

So, firms were apprehensive about taking a long position in rupee-dollar exchange rate.

“Now rupee has breached the ‘triple top position’ of 68.90, which would prompt the whole world to go long on dollars,” said Abhishek Goenka, managing director at IFA Global.

‘Triple top’ refers to a position in a technical chart where prices have hit the level three times, but had to retreat. This is the position where long traders book profit. Breaching this level means no view in the market and the price could swing any which way. Despite intervention by the RBI, the rupee should breach 70 shortly, said Goenka.

“Importers are caught on the wrong foot, and some exporters, too, are feeling they have sold their dollars too early. But there is no panic as such,” said Goenka.

According to currency dealers, importers are not adequately hedged for the long term, but for the short term, the cover could have been adequate. 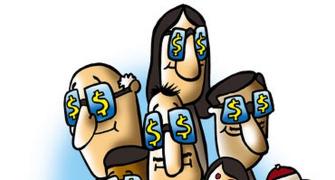