US sues BP, 9 other firms over Gulf oil spill 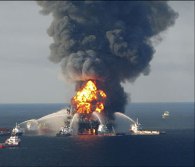 The US has filed a civil lawsuit against British Petroleum and nine other companies in the country's worst-ever oil spill off the Mexican Gulf that resulted in considerable environmental damage and badly affected the economy of the coastal states.

In the complaint filed on Wednesday in the District Court in New Orleans, the US alleged violations of federal safety and operational regulations which caused or contributed to the oil spill that began on April 20, when an explosion and fire destroyed the Deepwater Horizon offshore drilling rig in the Gulf of Mexico, approximately 50 miles from the Mississippi River delta.

"We intend to prove that these violations caused or contributed to this massive oil spill, and that the defendants are therefore responsible under the Oil Pollution Act for government removal costs, economic losses, and environmental damages," said Attorney General Eric Holder.

The companies have also been accused of failing to use and maintain equipment and material that were available and necessary to ensure the safety and protection of personnel, equipment, natural resources, and the environment.

The complaint also includes claims for civil penalties under the Clean Water Act, which prohibits the unauthorised discharge of oil into the nation's waters.

It alleges that the defendants named in the lawsuit were in violation of the Act throughout the months that oil was gushing into the Gulf of Mexico.

"We are also seeking civil penalties under the Clean Water Act, which prohibits the unauthorized discharge of oil into the nation's waters. We allege that the defendants named in this lawsuit were in violation of the Act throughout the months that oil was gushing into the Gulf of Mexico.

"And we intend to hold them fully accountable for their violations of the law," Holder said. "Even though the spill has been contained even though it is no longer the focus of round-the-clock news coverage and the subject of front-page headlines the Department's focus on investigating this disaster, and preventing future devastation, has not wavered," he said.