Unitech to put 3 hotels on the block Unitech has already tied up with hospitality chain Carlson for the Gurgaon property, and with Marriott for both the Noida and Kolkata hotels.

The three put together will have 600 rooms.

The sale of these hotels is part of the company's strategy to exit most of its non-residential businesses once it's up and running.

The developer is targeting to raise Rs 500 crore to Rs 700 crore (Rs 5 billion to 7 billion) per annum from the sale of non-residential projects, which some refer to as its non-core assets.

The other assets that could be partially or fully sold by Unitech include its shopping malls, office space, IT parks and land parcels in special economic zones.

Besides the hotels that are under construction, Unitech has land meant for the hospitality business.

Nagaraju said negotiations have not started yet for selling the hotels.

On whether real estate prices would witness a correction soon due to visible signs of an economic slowdown, the Unitech executive argued that cost reduction was not likely in this market.

However, he added that the increase in real estate prices was likely to be arrested.

Indicating that rising interest rates had impacted the company, Nagaraju said the interest outgo was estimated at Rs 600 crore (Rs 6 billion) for the current

This is despite the company's debt reducing.

Although new projects are rare in the real estate market at present, Nagaraju said Unitech has been able to regularly launch projects.

This is primarily because of the company's strategy to go beyond the NCR market.

The new markets that it has ventured into include Chennai, Ambala, Bhopal, Rewari, Bangalore, and Kochi.

While Unitech's had started developing eight million sq ft of projects in January, it plans to complete 10 million sq ft by September-end.

For the rest of the financial year, the company is working out its launch plan. When asked whether the company was planning to acquire any land in the near future, Nagaraju said, 'it is not our focus area'.

To a question on whether Unitech would need to raise more, Nagaraju said: "No, we don't require more."

Even the money raised from the two banks has not been used yet.

"Looking at the leasing environment, we thought it was prudent to tie up some fund."

In the first quarter of the year, Unitech cut its debt by around Rs 200 crore (Rs 2 billion).

On why the annual general meeting of Unitech has been deferred by a month to September 29, Nagaraju reasoned, "it was because of logistical issues". Carlson to open 26 hotels in India 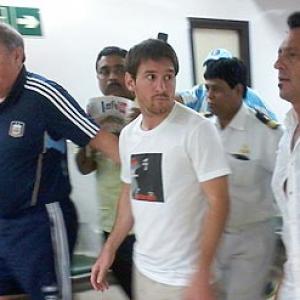