'Overall, the Indian economy is doing well.'
'Our economic fundamentals are strong and the early signs of recovery are sustainable.'
'This is positive for the market in the long run.'
Anup Roy and Samie Modak report. 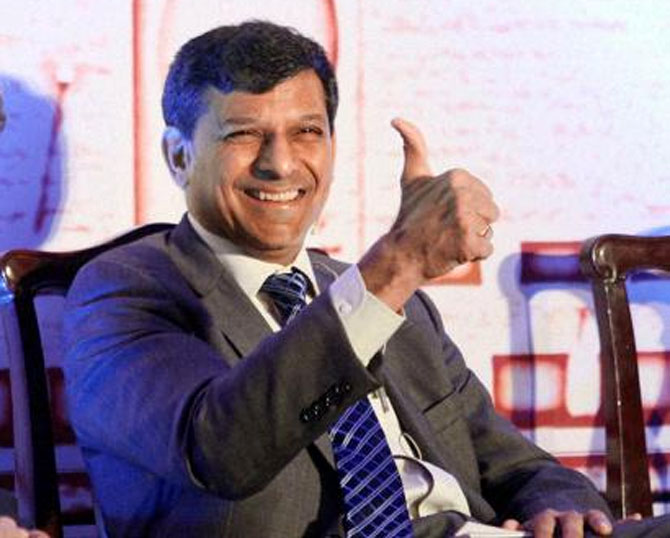 IMAGE: 'Of course, the face of the RBI matters, but no individual is greater than the institution.'

Reserve Bank of India Governor Raghuram Rajan's decision to not renew his term could lead to some sharp volatility in the currency and equities markets in the short term, but this should smoothen out eventually, say experts.

The bond market, however, could show more resilience, as the yields are firmly tracking the inflation trajectory.

Beyond the immediate concern that inflation may start raising its head again, the yields should not move beyond a few basis points.

The currency-equity relationship could potentially feed each other to create a loop as any long-term volatility in the rupee would be detrimental for the equities markets.

Market players believe the pressure on the rupee will have a cascading effect on the equities market and banking stocks could lead the fall.

Investor sentiment is already fragile ahead of a referendum in the UK to stay in the European Union.

"There could be a knee-jerk reaction in the market. The development will surprise the market and is negative from a short-term perspective," said Motilal Oswal, chairman and managing director, Motilal Oswal group.

Others agreed. "The markets will be disappointed to see him go. Our currency will come under pressure. There could be some selling in the stock market as well," said Saurabh Mukherjea, chief executive officer, institutional equities, Ambit Capital.

"Certainly there will be an impact on the rupee and I expect the RBI to intervene to address the volatility," said A V Rajwade, a senior currency consultant and commentator.

But much of the movement in the rupee would be a knee-jerk reaction to Rajan's decision, rather than a long-term shift in trend.

"The rupee cannot continue to depreciate sharply for a sustained period as exporters will enter into the market to sell dollars, at every sharp depreciation, at those levels," said Krishnamurthy.

This, in turn, will restore some of the lost strength. In fact, any "knee-jerk reaction in the financial markets will be an opportunity to investors," said Samir Lodha, director. Quantart Market Solutions, a treasury management firm.

"Of course, the face of the RBI matters, but no individual is greater than the institution and ultimately, the markets should function as normal," Rajwade said, adding in the long term, much will depend on how Rajan's successor sees the situation and their vision and strategies will end up influencing the markets rather than Rajan's absence.

What complicates the matter is that the week starting June 20, will also witness the results of the 'Brexit' referendum, scheduled on June 23, which should impact the market more than Rajan's development, experts said.

In an interview with Business Standard earlier this month, Mark Mobius, executive chairman, Templeton Emerging Markets Group, had said, "In the global banking world, Rajan has probably been the best. He has been the voice of reason and logic... If he is replaced with a politically-oriented person then the reaction will not be very good. But if it is somebody with a good reputation and who has a history of independence, then it should not be a problem."

In the whole scheme of things, the known-unknown factor remains how the foreign portfolio investors would view India and its markets and how they would end up behaving.

There is no denying that much of the flow that came to India in the last three years were riding on Rajan being there at Mint Road and his continuation of reforms aimed at attracting foreign investments in the country.

Market players said Rajan has been a very credible figure in the eyes of foreign institutional investors, given his ability to restore calm in the markets with his policies during turbulent times.

"There may be some knee-jerk reaction from FIIs. They will be eager to see who the replacement is. If it is a credible figure, sentiment might improve once again," said Dharmesh Mehta, MD, Axis Capital, adding that banking stocks being high-beta could see sharp correction.

So far this year, FIIs have been net buyers to the tune of $2.8 billion (Rs 18,760 crore/Rs 186.70 billion) in the equities market. If a portion of the foreigners decide to liquidate their equity or bond holdings in India, it would impact the rupee quite adversely.

The benchmark Sensex on Friday had closed at 26,625.9, while the Nifty 50 had ended at 8,170.2. The benchmark indices could give up between one and two per cent and will take cues from the rupee movement, experts said.

Already, global markets have been under duress last week because of uncertainty over the Brexit vote on June 23. The British vote to leave the EU is expected to have big implications for the global economy and financial markets.

Experts predict intense volatility in global equities ahead of the referendum. "The (Rajan) development is disappointing and has come at a very bad time. There is a lot of volatility globally due to events like Brexit. This is the time when our markets needed Rajan," said Mehta.

Experts, however, said any adverse reaction would be only in the short term and given the early signs of recovery in earnings and the economy the market are expected to do well from a medium-to long-term perspective.

"Overall, the Indian economy is doing well. Our economic fundamentals are strong and the early signs of recovery are sustainable. This is positive for the market in the long run." said Oswal.

The reason for this is that the foreign investors have generally remained bit tepid on Indian bonds this year and those who are invested could be in for the longer term.

However, after remaining below 7.50 per cent for quite sometime, the 10-year bond yield has started moving up with signs of rise in inflation. Retail inflation rose to a two-year high of 5.76 per cent in May.

Even as the liquidity in the system is plenty and the central bank has promised to keep liquidity in the neutral zone, bond yields could still rise if inflation inches up more, which most certainly could be the case.

However, only Rajan's departure decision may not influence bond yields much as yet, bond dealers said. 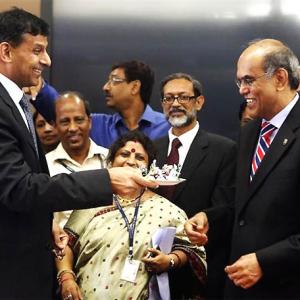