As the traders body's boycott of PepsiCo and Coca-Cola products across Tamil Nadu started on Wednesday, the initiative received a mixed response from retailers.

The non-alcoholic beverage is expected to lose around Rs 1,400-1,500 crore of business every year if the ban comes into effect as expected.

A M Vikrama Raja, president, Tamil Nadu Vanigar Sangam and Tamil Nadu Traders Federation said all retailers and shopkeepers in the state have begun to boycott these two MNC products, while many of the restaurants and super markets are continuing to sell and they have sought time.

The Tamil Nadu Vanigar Sangam (Tamil Nadu Traders' Association) had officially announced that the sale of PepsiCo and Coca-Cola products would be banned across the state from March 1.

If the decision goes through, this will be a big blow for these companies, which get around Rs 1,400-1,500 crore in sales from Tamil Nadu alone.

According to industry sources, while the market is estimated to be around Rs 2,000 crore, the share of local brands is only about Rs 600 crore.

A ground check, however, shows the boycott received mixed reactions. A few of the small retailers at T Nagar in Chennai, a major shopping business hub, which attracts thousands of people on a daily basis from across Tamil Nadu, said they continue to sell the products.

A few traders also claimed that they were not aware of the ban and some of them assumed that it was a ban implemented by the corporation of Chennai. Those who misunderstood have said they will resume the sale.

The retailers also feel that while PepsiCo and Coca-Cola replaces the stock on a regular basis and attend to any complaint immediately, some of the local brands visit the shop only once in a month.

For PepsiCo and Coca-Cola, the retailers can pay in installments without interest whereas some of the local brands demand upfront payment on stock, which is difficult to meet with.

Besides, they also fear the MNCs will take away the refrigerator they have provided to the shops, if they stop selling their products. These refrigerators are used to keep other beverage brands as well, and are of immense use during the summer season.

Some sellers agreed that the demand will help local businesses. But, they also raised doubts about the implementation.

"This call is against the proven fundamentals of robust economic growth, and against the clarion call of Making in India. The boycott call also violates the rights of the consumer to exercise choice," Indian Beverage Association said in a statement.

In January, a decision to launch the boycott of Coca-Cola and PepsiCo from March 1 was taken at a meeting of the traders association, consisting of 6,000 small and medium enterprises and 1.5 million members after test-marketing the idea at Jallikattu protests at Marina beach.

Interestingly, the Jallikattu protests had become a platform to raise several issues which concern the state.

A section of crowd raised slogans seeking solutions to the Cauvery issue.

Another section voiced opinion against MNCs alleging that these companies are trying to kill native cattle breeds to make a dent in the dairy market with their products.

The protesters also alleged that these companies were exploiting the state's water bodies to manufacture aerated drinks while farmers were facing severe drought.

"The traders body had directed all its members not to sell the two soft drink brands -- PepsiCo and Coca-Cola," he said.

One section even started forwarding pictures through social media of the launch of 'Vio', a flavoured milk from Cocoa-Cola and brought the products and destroyed them on the roads as a mark of protest. Amidst these demonstrations, the boycott was announced.

While the traders' body made a similar move earlier in 1998, it was foiled by the higher customer demand to these brands of soft drinks.

This time they are confident that they would be able to garner support from the public in large after seeing the students' movement.

"They (soft drinks) cause more harm than good to the body. Only recently, one of the brands had admitted to the fact that it was not suitable for children and that it contained certain harmful chemicals," said Vikrama Raja.

According to recent reports, Coca-Cola in its recent advertisement said that their products, Coke, Sprite, Thums Up and Limca, are "not recommended for children".

With the allegation going viral, the company responded that it is a mandatory safety warning for products with artificial sweeteners. The company spokesperson then said that the product is safe for children.

The beverage companies have also faced resistance and legal actions from locals, who were protesting against the bottling plants in South Tamil Nadu on a previous occasion. 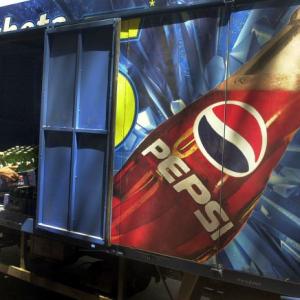