Indian technologists are gradually making a name for themselves as they 'drive innovation' in the global research and technology divisions of information technology giants like IBM, HP, Microsoft, and Motorola.

This goes against the commonly-held perception that Indian techies are restricted primarily to coding, testing and low-level programming.

The fact, say industry experts, is that Indians are doing 'phenomenally well' in the upper echelons of cutting-edge technology arenas.

Consider this. Of the 67 current IBM Fellows globally, five are from India. The number may not appear big at first glance. However, most of the other 'Fellows' are from the US and Europe. India's contribution to the labs is the largest from Asia.

An IBM Fellow is the highest technical position an IBM researcher can reach. The importance of an IBM Fellow can be gauged from the fact that, so far, five have received Nobel Prizes (Georg Bednorz, Gerd Binnig, Leo Esaki, Alex Müller, Heinrich Röhrer) and four have been inducted into the national inventors' Hall of Fame in the US.

The IBM Fellow programme started in 1963. Since then, only 194 IBMers have been awarded this coveted title. The Indians include Gururaj Rao, Jaishankar Menon, Ravi Arimilli, Ray Harishankar and C Mohan.

Ravi Arimilli has nearly 200 patents in his name till date. C Mohan, IBM Fellow and the chief scientist of IBM in India, is on the 12th plateau -- an achievement that comes to IBMers if they earn at least 144 points based on the number of patent applications filed by them.

Mohan, a PhD in computer science from the University of Texas in Austin and an alumnus of IIT-Madras, said: "For each patent application an IBMer files, he earns 3 points and once he reaches 12 points he achieves a distinction by getting the 1st Plateau Invention Achievement Award." Mohan has 34 patents to his credit.

IBM is not the lone case. Microsoft, HP and Motorola, too, have similar recognition programmes.

In Microsoft, the special designation of 'Technical Fellow' is an acknowledgment of the key role a technical leader plays in driving intentional innovation, in alignment with Microsoft's business strategies.

The two have Indian roots, too. Agarwal holds a BE in electronics and communication engineering from IIT-Roorkee, and a two-year PG diploma in industrial engineering from the National Institute of Industrial Engineering, Mumbai. Raman holds a BS in computer science from IIT-Madras.

The HP Fellows, likewise, set the standards for technical excellence and drive the research in their respective disciplines. They, according to the company, create the future in fundamental areas -- from computer architecture, nanometer-scale electronics and data compression, to the dynamics of information.

Umesh Dayal, a HP Fellow, is director, intelligent enterprise technologies lab at HP Labs. He holds 13 patents. Chandrakant Patel, known for his pioneering work in energy-efficient computing, is a HP Fellow at HP Labs, where he is responsible for strategically engaging in thermo-mechanical research for future microprocessors, workstations, servers and data centres.

Motorola does not have any Indian on its Fellows' list. However, three Indians figure in the 'key technologists' section, which has 37 technologists. Also, the chief technology officer of Motorola is India-born Padmasree Warrior.
Bibhu Ranjan Mishra & Leslie D'Monte
Source: 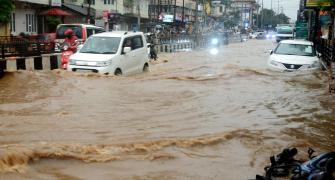