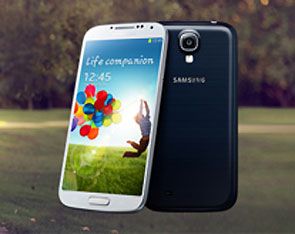 Samsung Electronics Co unveiled a stripped down version of its flagship Galaxy S4 smartphone on Thursday, aiming to grab a bigger share in the mid-tier segment as growth in the high-end market slows.

The Galaxy S4 mini, which follows the debut of the S4 just a month ago, will have a 4.3-inch screen - still bigger than Apple Inc's 4-inch iPhone 5 - and a 8-mega pixel rear-facing camera.

By comparison, the original S4, which hit the 10 million-sale mark last week to become Samsung's fastest selling smartphone, has a bigger 5-inch full high-definition screen and a 13-mega

Samsung did not announce a price for the phone or give a launch date, but the market estimates the smaller type will be priced at around $350.

The launch comes ahead of the widely speculated low-priced iPhone later this year and as Samsung, the world's top smartphone maker, looks to widen its lead with products spanning both the high and cheap-and-cheerful ends of the market.

Samsung is also expected to unveil more varieties of the S4 in the upcoming mobile event in London next month including a model with optical camera zoom functionality as well as a phone with water-proof features.
Miyoung Kim
Source:

© Copyright 2021 Reuters Limited. All rights reserved. Republication or redistribution of Reuters content, including by framing or similar means, is expressly prohibited without the prior written consent of Reuters. Reuters shall not be liable for any errors or delays in the content, or for any actions taken in reliance thereon.
Related News: Apple Inc, London, Samsung Electronics Co
Print this article