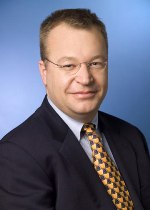 Stephen Elop has been appointed as the chief executive officer of Nokia by its board of directors. Elop, who currently heads Microsoft's business division, will replace the current CEO Olli-Pekka Kallasvuo and join the Nokia team on September 21.

Elop holds a degree in computer engineering and management from McMaster University in Hamilton, Canada.

"I am extremely excited to become part of a team dedicated to strengthening Nokia's position as the undisputed leader of the mobile communications industry," said Elop.

Olli-Pekka Kallasvuo will leave his current position as president and CEO of Nokia on September 20 and will join on the Nokia board of directors with immediate effect. He will continue to chair the board of Nokia Siemens Networks in a non-executive capacity.