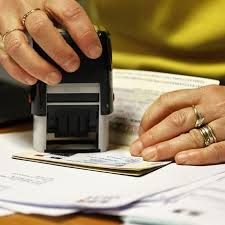 With some international visitors misconstruing government's much-touted tourism initiative Visa on Arrival to be a scheme which guarantees visa on landing, the Tourism Ministry has decided to rename it to Visa Online in an effort to end the confusion.

The Tourism Ministry has approached the Union Home Ministry for the purpose, ministry officials said on Thursday.

"There is a question about the terminology on whether it is e-visa or visa on arrival.

“I think this issue should be addressed in a different manner.

"We declared it as Visa on Arrival.

“(But) Basically it is Electronic Travel Authorisation," Union Tourism Minister

Mahesh Sharma said while briefing reporters on the sidelines of the launch of 'Visit Kerala 2015'.

The e-Visa facility is available to visitors from about 44 countries.

Applicants from the eligible countries can apply online minimum four days in advance of the date of arrival.

However, since it was promoted as 'Visa on Arrival', some international visitors misunderstood the scheme and assumed that they will receive their visas on landing. Since they hadn't applied in advance, they had to return back home.

Tourism Secretary Lalit K Panwar said that the issue of VoA has been taken up with the Home Ministry.

"We have taken up the issue with the Home Ministry.

“Now, we will be calling it as Visa Online.

“If you call Visa Online, there will be no confusion because you will get visa online in your inbox.

Meanwhile, on the proposed new National Tourism Policy, Sharma said the new policy, to be unveiled on May 15, will focus on issues such as generation of employment for youth and empowerment of women.

Stressing that steps are being taken for security of foreign tourists in India, the minister appealed to the media not to ‘glorify mishappenings’.