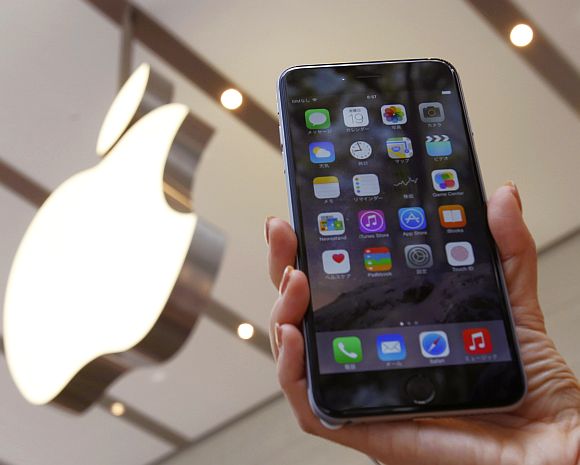 Apple Inc opposed a court ruling on Tuesday that ordered it to help the Federal Bureau of Investigation break into an iPhone recovered from a San Bernardino shooter.

This heightened a dispute between tech companies and law enforcement over the limits of encryption.

Chief Executive Tim Cook said the court's demand threatened the security of Apple's customers and had 'implications far beyond the legal case at hand.'

Earlier on Tuesday, Judge Sheri Pym of US District Court in Los Angeles said that Apple must provide 'reasonable technical assistance' to investigators seeking to unlock the data on an iPhone 5C that had been owned by Syed Rizwan Farook.

Federal prosecutors requested the court order to compel Apple to assist the investigation into the December 2 shooting rampage by Farook and his wife, killing 14 and injuring 22 others.

The two were killed in a shootout with police.

The FBI has been investigating the couple's potential communications with Islamic State and other militant groups.

"Apple has the exclusive technical means which would assist the government in completing its search, but has declined to provide that assistance voluntarily," prosecutors said.

US government officials have warned that the expanded use of strong encryption is hindering national security and criminal investigations.

Technology experts and privacy advocates counter that forcing US companies to weaken their encryption would make private data vulnerable to hackers, undermine the security of the Internet and give a competitive advantage to companies in other countries.

In a letter to customers posted on Apple's website, Cook said the FBI wanted the company 'to build a backdoor to the iPhone' by making a new version of the iPhone operating system that would circumvent several security features.

"The government is asking Apple to hack our own users and undermine decades of security advancements that protect our customers -- including tens of millions of American citizens -- from sophisticated hackers and cybercriminals," Cook said.

He said Apple was 'challenging the FBI's demands' and that it would be 'in the best interest of everyone to step back and consider the implications.'

In a similar case last year, Apple told a Federal judge in New York that it was "impossible" for the company to unlock its devices that run an operating system of iOS 8 or higher.

According to prosecutors, the phone belonging to Farook ran on iOS 9.

Prosecutors said Apple could still help investigators by disabling 'non-encrypted barriers that Apple has coded into its operating system.'

Forensics expert Jonathan Zdziarski said on Tuesday that Apple might have to write custom code to comply with the order, presenting a novel question to the court about whether the government could order a private company to hack its own device.

Zdziarski said that, because the San Bernardino shooting was being investigated as a terrorism case, investigators would be able to work with the NSA and the CIA on cracking the phone.

Those US intelligence agencies could likely break the iPhone's encryption without Apple's involvement, he said.

© Copyright 2020 Reuters Limited. All rights reserved. Republication or redistribution of Reuters content, including by framing or similar means, is expressly prohibited without the prior written consent of Reuters. Reuters shall not be liable for any errors or delays in the content, or for any actions taken in reliance thereon.
Related News: Federal Bureau of Investigation, Syed Rizwan Farook, Tim Cook, National Security Agency, US District Court
SHARE THIS STORY
Print this article