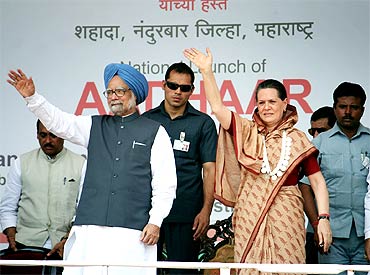 National Advisory Council chairperson Sonia Gandhi has written a letter to Prime Minister Manmohan Singh, asking him to treat as 'urgent' the notification of minimum wages under the National Rural Employment Guarantee Act.

This is her second intervention, seeking that work done under NREGA be treated as scheduled employment under the Minimum Wages Act.

The rural development ministry has not notified minimum wages so far and has even been dragged into a prolonged court case in Andhra Pradesh over non-payment of minimum wages for NREGA workers, which it funds.

Under Section 6 (2) of NREGA, the ministry had been earlier paying agricultural wages of various states for the scheme, till it decided to have its own wage rate under Section 6 (1) of the Act.

But the ministry froze the wage rate at Rs 100 a day in January 2009. Today, state wages are higher in many places, creating a situation where NREGA wages violate many states' Minimum Wages Act.

The issue was debated in the NAC last month, where it was recommended that minimum wages should be enforced in NREGA. Gandhi's  letter says: "An immediate solution could be reversion to Section 6 (2) of the MGNREGA (Mahatma Gandhi National Rural Employment Guarantee Act).

This was discussed in the NAC meeting of October 23  and is being suggested by the chief ministers," she writes.

The reference here is to the Chief Ministers of Andhra Pradesh and Rajasthan, who have both written to Prime Minister Manmohan Singh seeking payment of minimum wages under NREGA.

Gandhi's letter further points to the recommendations of the Central Employment Guarantee Council working group on wages, headed by Jean Dreze, which said state wages should be linked to the Consumer Price Index.

It also suggests NREGA be notified as a scheduled employment by the Government of India under Schedule II of the Minimum Wages Act 1948. Last week, the labour ministry said it would introduce a national minimum wage to tide over such contradictions and to ensure payment of minimum wages, but the rural development ministry has kept quiet so far.

The Andhra Pradesh government had sued the ministry in the high court over non-payment of minimum wages after the ministry issued a notification freezing the NREGA wages at Rs 100 in January 2009.

Since then, state minimum wages have increased more than that in at least 19 states, including Rajasthan and Andhra Pradesh, but the states have been forced to pay less in the centrally funded scheme.

NAC member Aruna Roy, whose network of NREGA activists, and her colleague in the NAC Harsh Mander, welcomed the step taken by Sonia Gandhi and said it was an issue that was so obvious and on which no one could have made a mistake. "How can you not pay minimum wages to a worker?" asked Roy.

The rural development ministry is under pressure not only from NAC to act on the matter of payment of minimum wages in NREGA but from the fact that the hearing in the Andhra Pradesh high court is scheduled for November 16.

In the last hearing, the court had asked whether state or centre was to be blamed for contempt of court. The court had maintained that minimum wages should be paid.

Says Roy: "Now the ministry has to act soon, or it would be charged with contempt of court."

Sonia Gandhi's letter provides a fresh impetus for the ministry to act.