American entrepreneur Raj Vakharia has announced the launch of a private equity fund, which will invest $250 million worth of United States institutional capital into India's booming real estate market.

The former assistant state treasurer of New Jersey -- who has worked in senior positions on Wall Street and is presently the co-chairman of Uni-Mart, a former American stock exchange company and the nation's 30th largest store chain with sales in excess of $550 million annually -- said the fund will aggressively capitalize on the rapid growth and opportunity in India's real estate market. 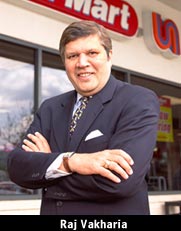 The fund will invest in a broad range of commercial and residential real estate, including hospitals, educational institutions, single-tenant properties, retail real estate, apartments and infrastructure. It will target its investment into high-growth markets throughout India like Mumbai, Bangalore, Chennai, Pune, and Delhi.

Rajkot-born Vakharia said he would leverage the equity to deploy over $750 million in India over the next three to five years. "The market in India is hot with a lot of retail projects like malls in this country (happening)," Vakharia told rediff India Abroad. "Office spaces are being built for American and other companies moving to India, and in response to demands from the affluent middle class. So, there is a great opportunity now to invest in India and make money."

Construction and development projects in India had become considerably more attractive to investors abroad ever since the Indian government decided to allow greater foreign direct investment explains Vakharia. "Also, previously full repatriation of profits was not allowed, but now with the change in regulation that could be done as well and I think that is great news."

The entrepreneur said he was not going to India with NRI investment, but as a US institutional fund. "This fund has nothing to do with Uni-Marts," Vakharia said. "I am doing it under my Reliance Properties, a real estate firm specializing in residential and commercial development throughout the New York/New Jersey region."

Vakharia's fund is expected to enter into a co-investment agreement with a major financial institution in India. He would not name the institution, but said he was leaving for India to negotiate with the Mumbai-based entity.

"The fund's goal is to provide financing for the development of world-class properties and to assist in furthering India's economic expansion. I am excited about the opportunity to form strategic alliances with some of India's top financial and real estate institutions. The next few years should be a time of outstanding growth for India."

Vakharia, who came to the US in 1976 and earned a degree in business administration, spent over 25 years in the real estate capital markets on Wall Street and in the government. He was formerly managing director of real estate for the investment banking firms Credit Suisse First Boston and Donaldson, Lufkin & Jenrette. After he left Wall Street, then governor of New Jersey James McGreevey appointed him as assistant state treasurer, thus making him the first Indian American to hold such a high post in the state. In that position, he advised the government on the $70 billion in investments and $18 billion in public debt. Uni-Mart, which he bought into in July 2004, is a convenience/gasoline station chain of 282 outlets on the East Coast in the US.

Why China won't be able to match India

Indian economy: The next wave