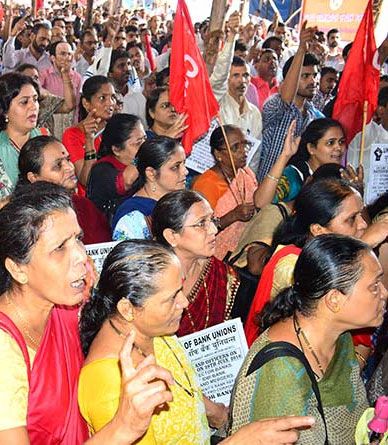 Banking operations came to a standstill in Telangana as over 15,000 employees of various banks participated in the general strike called by trade unions to protest government's "anti-labour policies".

All India Bank Employees Association (AIBEAP) joint secretary B S Rambabu said demonstrations will be held in all the district headquarters along with other trade unions.

"Though branches will be open, there is no business taking place in PSU banks. Clearing will also be impacted. However, there will not be any problem with regard to ATMs' functioning," Rambabu told PTI.

Most of the buses run by Telangana State Road Transport Organisation are kept off the roads, a senior official said.

"We will not directly participate in the strike, but wear black badges and attend duties," Satyanarayana said.

According to him, revenue department officials are not participating in the strike as they are busy in reorganisation of districts.

Most of the industrial parks witnessed thin attendance on Friday.

Ten central trade unions have called for a one-day nationwide strike today, protesting the "anti-worker" changes in labour laws and the Centre's "indifference" to their demands for better wages. All India TU strike: It's life as usual for Mumbai commuters