Star India and Zee Group, two leading electronic media conglomerates in the country, came together to form an alliance for distributing television content. 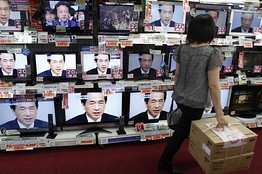 In a landmark deal announced in Mumbai, Star Den Media Services Pvt Ltd and Zee Turner Ltd will form a joint venture to combine distribution of their respective channel bouquets in India.

Star channels, on the other hand, are distributed by StarDen, 50:50 joint venture between Star India and Sameer Manchanda's DEN Networks.

Commenting on the deal, Zee Entertainment Enterprises CEO and MD Punit Goenka said, "The Indian Television market is growing rapidly and provides ample opportunities for the JV company to create value." Star India CEO Uday Shankar said that coming together of "the two leaders will lead to a larger consensus around a growth blueprint for the Indian electronic media industry".

The new joint venture would mark the reunion of the Zee and Star groups, which are among the earliest entrants into the Indian private television space, after many years.

Industry observers feel that the new generation team of media companies, such as Star's Uday Shankar, Zee's Punit Goenka and Den Networks' Sameer Manchanda, have successfully moved beyond the old history of cut-throat rivalry between their groups to create this new venture.

Among these people, Manchanda has mostly been a backroom strategist and industry observers feel that a partnership between two giants like Star and Zee would not have been possible without Manchanda playing a critical role in bringing them together.

Observers said that the origin of this partnership finds its roots in Manchanda's departure from Network18 following the latter's tie up with Sun TV group and the pullout of the group's channels from Star DEN network.

Commenting on the deal, Turner International MD Anshuman Misra said, "This is a big win for the consumers as it gives them the choice of best of content, greater access and variety all under one bouquet and paves the way for faster digitisation of the cable industry."

Den Networks Chairman and MD Sameer Manchanda said: "This is a historic step forward in the Indian television industry and will create a paradigm shift in pay distribution."

"The new JV gives a clear impetus to digitalisation and promotes transparency and addressability in the broadcasting distribution value chain. It also brings more channels, and greater choice and flexibility to the Indian consumer," he added.

Zee Group joined hands with Turner International in 2002 to create a distribution venture with a portfolio of 34 channels, including Cartoon Network, Pogo, HBO, WB and CNN.