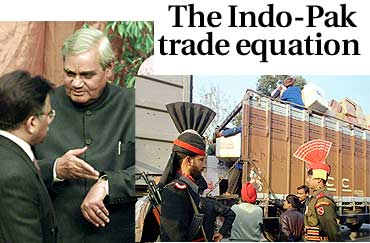 During the same period, it exported $930 million worth of goods and services to Bangladesh, and $662 million to Sri Lanka.

Conclusion: Pakistan's need for Indian goods and services is lesser than that of the two other sub-continental nations.

The conclusion is logical; it is also erroneous. More facts:

In any field you care to name, India produces goods and services badly needed by Pakistan; the neighboring nation has through the imposition of enormous duties and other restrictions, kept its imports from India to a minimum.

This situation has created a lucrative underground economy; everything from patent medicines to tea, sugar and other essential commodities, industrial machinery, cement, tires and chemicals are smuggled into Pakistan; the return 'trade' flowing into India through the smuggling circuit includes edible oils, spices, dry fruits and pulses.

The preferred back door routes for such unofficial trade are through the land borders between the two countries, and via the borders of Iran and Afghanistan.

A third route is circuitous; Indian items are officially imported by Singapore and Dubai; these countries then re-export to Pakistan. The roundabout route enriches middlemen, it also drives the prices upward.

"Voluminous smuggling of commodities and merchandise is an indication of mutually profitable economic opportunities," points out Bidananda Chengappa, author of many research papers on Indo-Pak trade relations. "It reflects the suppressed desire of the business communities in both countries."

THE Pakistan mindset is seen as the single biggest impediment to bilateral trade.

India, in principle, granted Most Favored Nation status (which standardizes tariffs on offer to MFN nations) to Pakistan in 1995-'96; further, it has no list of restricted items of trade with that country.

Pakistan has not given India MFN status; its restricted list comprises over 600 items, mostly containing metals or chemicals, other items such as tea are allowed, but crippling import duties make trade in such commodities largely a paper exercise.

It is all a question of nomenclature, feels Waquar Ahmed Sheikh, program co-ordinator of the SAARC Chamber of Commerce and Industry in Islamabad.

"Why don't you change the term? In Pakistan, people think granting of MFN status to India is something too special," Sheikh points out. "Anyway, we will be giving it in 2005, because of the WTO guidelines."

More practically, many in Pakistan fear an economic invasion; they argue that India, if allowed unfettered access, could flood Pakistan markets with goods, with ruinous effect on Pakistan's indigenous industry.

Chengappa believes the fear is misplaced, and not rooted in precedent. "Pakistan has excellent relations with China, but that country has not been able to dump goods in the Pakistan market," the analyst points out.

The argument against fears of flooding, says T K Bhaumik, senior advisor to the Confederation of Indian Industry, is that "Imports depend on the purchasing power of people."

Another argument favored by naysayers is that the balance of payments will favor India. But this, say analysts, will only be an issue for the first few years of bilateral trade; Pakistan's industry is gearing up fast and once it gets into high gear, the import-export balance will right itself.

Pakistan may not even have to wait a few years for the ledger to balance itself. The Federation of Indian Chambers of Commerce and Industry, for instance, estimates that as and when the Iran-India gas pipeline materializes, Pakistan stands to gain between $600 million and $800 million, annually, by way of transit fees, besides using the pipeline for its own energy needs.

Security is an oft-cited argument against bilateral trade; experts fear that if the borders are made softer and visa restrictions are slackened, security could be compromised.

Indian analysts believe there is a further reason: Trade involves people to people contact; such contact on an ongoing basis could dilute antagonism and lessen the hold of the Kashmir issue on the minds of the people of Pakistan; this in turn could lead to a lessening of the military's hold on the populace.

There could be one other, hidden, reason. Chengappa believes vested interests have a stake in perpetuating the status quo. "The nexus of politician, businessman, official and criminal collectively makes money from this smuggling activity," he alleges. "They don't want change."

BUT change -- whether desired, or not -- is in the air; the winds driving it are the recent overtures of peace between Prime Minister Atal Bihari Vajpayee and his Pakistan counterpart, Mir Zafarullah Khan Jamali.

'Dil ke rishte khulenge to trade chalega na bhai' (When we open our hearts to each other, trade will follow), Jamali told an Indian television channel May 19.

Bhaumik puts the case more prosaically: "Money can buy us love," he says. "Let the economy drive politics this time, it has the best chance to succeed."

The two remarks are symptomatic of a sea-change in thinking; thus far, the Kashmir issue was seen as a hindrance to normal relations including trade; the revised thinking is that normalization of trade relations could be the vital first step in defusing the issue and ushering peace and prosperity to the region.

Moves are already being made in this direction; FICCI has invited 100 Pakistan-based businessmen to India to discuss the stepping up of trade relations.

"The strong Pakistani delegation led by President Riaz Ahmed Tata will visit Delhi on June 27-28," says Manish Mohan, FICCI's assistant director on the Pakistan desk. "This meeting will be possible only if direct flights between India and Pakistan are restored," he warns.

Jamali announced the opening of airways in April, but the official notification has not yet been issued.

"Indirect flights are too costly," Mohan points out. "It used to take me almost a day to reach Islamabad. Now the ball is in Pakistan's court, I am keeping my fingers crossed."

FICCI estimates that given a conducive climate, Indo-Pak trade can swell to the levels of $3 billion to $4 billion.

"The Indo-Pak trade scenario seems positive again," Senator Ilyas Ahmed Bilour, co-president of the India-Pakistan Chamber of Commerce and Industry, told rediff.com in course of a telephonic interview. "The positivism of today is much more than that of Lahore (a reference to Vajpayee's bus trip to Lahore in February 1999).

"As the deadline for the World Trade Organization comes closer, things are going to pick up further. The perception among us is that the Kashmir issue is going to be decided soon, one way or the other. It is a matter of time before both sides come to the table."

"There is," says Mahesh Saharia, a Kolkata-based tea exporter to Pakistan, "a distinct change in the Pakistan business community."

By way of exemplar, he points out that seven years ago, when he went with a business delegation to Lahore, Kashmir was very much in the air; when the delegation met with the Lahore Chamber of Commerce most Pakistan businessmen emphasized that "till the Kashmir issue is resolved, Pakistan cannot do normal business with India."

In 2001, says Saharia, when an Indian delegation met with the Lahore Chamber, only one or two percent of the members raised the Kashmir issue. "The majority are ready to delink the issue of trade with that of Kashmir," he says.

SIMILAR optimism has greeted peace overtures in the past; this time, the optimism is fueled by a welcome development. "The Pakistan military is very much behind the negotiations," says Waquar Ahmed Sheikh.

The corollary is unstated, but obvious: the army had stymied previous moves in the direction of bilateral relations.

"To have good international relations, Pakistan needs good relations with India," Sheikh says, explaining the current mindset. "This understanding will improve trade. Since the army is in the driving seat this time, unlike during Lahore, we expect some kind of settlement which will help people-to-people interaction, which in turn will help trade."

The North Indian States Chambers of Commerce (also known as the PHD Chambers, which is said to be dominated by Punjabi businessmen, has an Indo-Pak desk dating back to 1982; its members have lately renewed enquiries about bilateral trade.

Bhaumik has a one-line formula: "Punjabis versus Punjabis.

"Let the people of both Punjabs start free trade, and see the wonders. They are traders for centuries, let them do business with each other."

This falls in line with expert analysis that just as steel and coal helped the integration of Europe, agriculture will bring together the two neighboring countries.

The advantages of mutual trade are obvious; PHD President P K Jain enumerates them: 1. There is no language barrier between the two nations; 2. Short distances mean lesser freight charges, 3. Quick deliveries through the Wagah border means less inventories and 4. Familiarity with each other's trade practices, fashions and household needs facilitates buying and selling.

There are other, less obvious, advantages. "Pakistan needs the route to Bangladesh, we want a market for dates, rock salt, yarn and cloth," says Ilyas Ahmed Bilour of the IPCC. "And don't forget, India's 150 million strong middle class will be available to us."

All systems are go -- the only real stumbling block is the fear that relaxing the borders could produce undesirable side effects.

Even that fear may be dissipating. "The Indian security apparatus is not against trade with Pakistan," says a senior Indian intelligence officer. "In fact, trade ties will divert attention from the sensitive issue (of Kashmir). Also, India needs the route to Afghanistan and the Central Asian Republics."

The officer points out that already, there is considerable movement between the two countries, mostly relatives visiting from across the border; relaxing visa regulations for the sake of trade won't appreciably reduce security.

Waquar Ahmed Sheikh is equally dismissive of the security bogey. "Along with a few million dollars, let a few spies come in as well," he jokes. And then, in more serious vein, he adds: "International economics, and America, will drive the politics of South Asia; hopefully, it will also drive away fears of the West over nuclear tensions in the region."