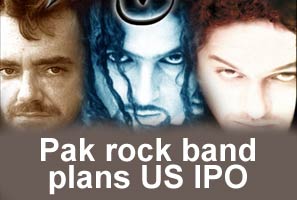 What happens when a mergers and acquisition specialist rips off his tie and turns into band manager? Answer: you get a rock group that's intensely focused on the business opportunities.

That's the story of Junoon, the Pakistani sufi rock band that has become a top act in the sub-continent. It's manager Shehryar Ahmad was once an M&A specialist at J P Morgan. And he's using his business experience to make sure that the money keeps pouring in for the group.

Eight years ago Shehryar -- his brother Salman Ahmad is the group's lead guitarist -- registered Junoon Inc, with a paid up capital of Rs 10 lakh (Rs 1 million). But today he's going a few steps further and ambitiously considering an IPO in the United States.

Why does a rock band want to hold an IPO? Most importantly, it wants to launch its own record label. Once Junoon has its own label it will try to reach new markets.

For a start, it's looking at getting within earshot of South Asians in the United States. Currently, EMI does Junoon's distribution.

There are other ambitious plans in the pipeline. Junoon would like to kick off an expansion plan with an office of its own in India.

But that would be followed by a chain of Junoon stores which will sell merchandised products and even musical instruments autographed by the three band members.

A rock band is, of course, only as good as its last chart-topper. But Junoon has had a pretty good run in recent times. The band's latest album Dewaar has already sold a million copies in under one month -- and that's only in Pakistan.

The album even has a number in English titled "No More". Music industry experts predict that the album will be the group's highest grosser ever.

Certainly, the group is at the peak of its popularity. It's doing between 50 and 75 concerts per year -- that's up from three in 1996.

Also, it's doing work for a clutch of Bollywood projects and is teaming up with several Indian artistes for a fusion project.

Also in the pipeline is a photobook on the group which has been together for 15 years. "We are about to finalise a publisher for the book" says Shehryar.

The group has come a long way since its early days in the early '90s when a rock band was considered an extraordinary innovation in Pakistan.

In those pre-MTV days Junoon had to spend its own money to record demo albums and hawk them with the record companies.

"It was a literally hand-to-mouth existence," Salman recounts. "The business model of breaking even was simple -- while schools and colleges would not pay us to play at fests, we would get our own sponsors and play at such fests," he says.

The amazing part was that they were still struggling despite having sold 100,000 copies of their first two albums Junoon and Talaash.

But the big break came in 1996, when the Pakistan Cricket Board asked musicians to compose its theme song for the 1996 World Cup. Out of 60 entries, Junoon's "Hai jazba junoon" was chosen as the official song, which was made into a video and the band was suddenly everywhere.

And then in 1998, when the single "Sayonee" hit the airwaves in India, Junoon became a rage in the sub-continent.

Since, the band has gone from strength to strength. It has landed the biggest sponsorship contract ever in Pakistan with Coca-Cola.

Unilever is an associate sponsors and support the band, at all live concerts and music videos. In return the band endorses the Close-up brand.

Mind you, there have been ups and downs. Back in 1996 Salman wrote a song "Ehtezaab"(accountability), which accused former prime minister Benazir Bhutto of shifting ancient Pakistani artefacts to her mansion in the United Kingdom.

Subsequently PTV refused to air their song, and when the band refused to sing an eulogy in praise of Nawaz Sharif, he banned the band "because of their long hair". This turned the band into a cult in the sub-continent, making them more popular than ever before.

Meanwhile, Junoon has grown into a million dollar company. And Shehryar feels, that it has just touched the tip of the iceberg. An album in Pakistan sells for just Rs 35, while in India, it is close to double the amount, while in the United States it is at $10.

"We saw our revenues double, when EMI brought our albums to India, and once we market ourselves to the subcontinental population in the US, we can easily hit the $10 million number by 2008," he feels.

Guitar legend Santana's comeback recipe -- where he teamed up with current crop of younger artists like DMB and Rob Thomas -- to release the chartbusting Supernatural, is the path Junoon want to tread -- mixing collaboration with an earthy Eastern sound, which is pretty big in the US thanks to the tremendous audience  base Nusrat Fateh Ali Khan, created.

Whether Junoon will be able to re-package Sufi sound and be the Asian rock phenomenon, is something we'll have to keep our ears open for in coming years.