One man who has held onto this company is Willie G Davidson, after whose family, Harley-Davidson takes its name. He told Ingrid Vanderveldt on a CNBC show called American Made, that this company is his hobby, his love and his passion.

He says, "The products are emotional and therefore, we have loyalty second to none. The brand is world famous and I'm just proud to be part of it. I'm lucky that I can help keep the flame burning."

His passion for the bikes began in his childhood. His father, William H Davidson was President of the Harley-Davidson Motor Company from 1942 to 1971. He had a great passion for riding and this was something that his sons -- Willie G and his younger brother John inherited.

While, there was no pressure on the boys to join the firm, Willie G had a talent that would prove to be valuable. He could draw very well and while listening to history lectures in school, he didn't take down notes, instead he was sketching motorcycles!

He then sharpened his skills at the Art Centre and Design College in Los Angeles. He recalls, "After graduation, my portfolio was looked at by automobile design companies, industrial design firms and I actually wound up at a design firm in Milwaukee for a couple of years." 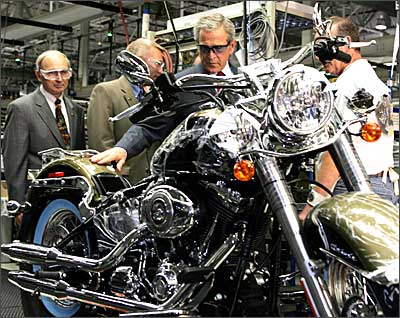 He says, "We are close to our customer, we ride these bikes, we collect them, we design them and so, we have an intimate understanding of the products and what they are all about. We try and understand its history over all these years and use our heads to make sure, we can keep it going for the next 100 years. I think it can go on forever, if we do it right. But every company is vulnerable as we all know."

This company has a rich and long history. It was founded in 1903, at the turn of the century when transportation was in a state of flux.

Wille G explains, "The original four - the three Davidson brothers and one Harley - were in the process of designing and producing prototype motorcycle, so you could get to your destination easier than on a horse (which was the favoured mode of transportation being used then). They were struggling trying to build this and they were working in a little shack behind my great grandfather's house. They all had jobs, so they did this in their spare time."

"Railroads were big then and they all knew about machinery. They used to come home from work at night, go into the shack and start making parts. There were no auto part manuals then, so they had to do it all themselves. They built a motorcyle, that they thought would have durability and that would work okay."

Around this time, the team ran into competition from another entrepreneur - Henry Ford. Willie G says, "Henry Ford created mass production and the Model Ts became equal in cost to a Harley-Davidson. So, back in the 1920s, everyone could have a car. So, we were no longer the cheapest mode of transportation."

That's when Harley-Davidson made owning and riding a motorcycle a fun thing to do, which continues to be its unique selling proposition even today.

These bikes also found their way to the local and federal government. In 1908, the Detroit police department had been utilising the bikes to help maintain law and order. During World War 1 and the Second World War, the Harley-Davidson founders were roped in to help with the war effort.

They produced thousands of bikes for the US and its allies. These bikes were built to go over fields and rough roads, had high ground clearance, was painted olive green with a white star on the fuel tank and had a gun scabbard on the front fork.

In 1969, some of the owners of Harley-Davidson thought of diversifying their interests. Willie G, his father and brother did not want to do this and wanted to remain an independent company. But this company was an attractive cash cow, so the manufacturing group Bangor Punta approached Harley-Davidson shareholders and offered to buy their stock. To avoid this, the company leaders decided to look for a white knight - essentially a cash-rich third party, who understood what Harley-Davidson stood for.

They found AMF, America Machine and Foundry -- a manufacturing company that made a wide range of products from food and tobacco processing equipment to bowling balls. AMF came in and quickly established who was boss, by incorporating their logo on the bike's fuel tank.

This marriage wasn't turning out the way it was intended. AMF realised how capital intensive the business was and the quality had begun to slip. With the American economy in a recession and the Japanese bikes coming in, their problems just seemed to be getting worse.

So, in the 1980s, the company came back to its original owners because AMF asked them to buy it back! So, they used their personal networth, help from the banks and whatever they could raise personally to buy back Harley-Davidson. They managed to raise about $80 million. They had to rescue the company from debt and they were able to did it because they were passionate about it and believed in the brand.

But 1982-83 and 1984 were rough years because Japanese manufacturers like Kawasaki, Suzuki and Honda began selling in the US in increasing numbers and were able to build bigger bikes at lower costs. And this began to tell on Harley-Davidson's balance sheet.

The plant was operating at 50% capacity and struggling to maintain the 13% market share they had. They had to layoff 1,800 employees. Even the banks were thinking of pulling the plug on them.

So, they went to the government to ask for assistance in putting curbs on Japanese imports, which the government agreed to do. And within a timeframe, Harley-Davidson bounced back.

The company was held up as an example of American competitiveness and was even given a stamp of approval by President Ronald Reagan himself, who came to their plant and gave them a congratulatory speech.

They are also No.1 seller of the 650cc and higher class bikes in Japan. The company's net income has risen 45% from 2001 to 2005. But keeping the customers coming is a challenge, which they are more than geared up to meet.

As Willie G Davidson says, the company has brand loyalty and recognition and some new products lined up as well. So, those die-hard Harley-Davidson bikers can ride on into the sunset.