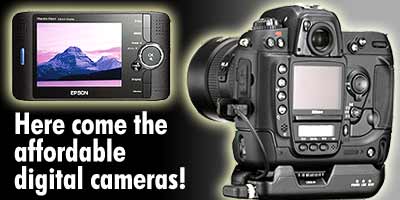 Canon India is turning its lens on the Indian public. Last month the Japanese copiers-to-cameras company launched a range of smart new digital cameras aimed at the younger generation and priced at a street-smart Rs 12,995.

In the next few months Canon will be hitting the road in specially equipped vans on an eight-city roadshow to explain how easy it is to shoot pictures with digital cameras -- and develop the results.

"We expect digicams to contribute to over 25 per cent of our turnover in India compared to only 1 per cent now," says Alok Bharadwaj, director, Canon India.

The Japanese hi-tech giant isn't the only company that has a digital vision of the future beyond photo albums. Last fortnight another Japanese megacorporation, Sony India, hit back at competitors by slashing the price of its top-of-the-line 5 megapixel digicam by 30 per cent.

"With the price correction we expect to increase our market share from 15 per cent to 30 per cent by the end of this year," says Ranvijay Singh, product head, digital imaging, Sony India.

Digital cameras have swept the globe, changing the rules of imaging. Now the photographic revolution is about to hit Indian shores.

Cashing in on a large, untapped market, a pack of international digicam giants -- including Samsung, Canon, Sony, HP and Kodak -- are aggressively launching digicams at attractive prices and hoping to woo Indians away from their old analog boxes.

If these companies have their way the future could look very different. For a start the old family photo album will become a thing of the past.

Photo aficionados will be able to store their favourite memories on their PCs and e-mail them to friends and relatives.

For the old-fashioned who still want prints the companies are selling portable, battery-operated printers that will offer high quality reprints whenever and wherever you want them.

Already there are signs that it's turning into a bitter slugfest. Sony is battling to capture the top end of the digicam market with its sophisticated 5 megapixel and above models.

But it's facing tough competition from companies like Samsung that are also focusing on more affluent customers. Samsung is leveraging its technological prowess and launching small but powerful cameras that also double as camcorders for around Rs 25,000.

Says a combative Vivek Prakash, vice president, Samsung India: "We will not play on price. Our competitor is Sony. By December we expect to sell 1,500 to 2,000 digicams a month which is virtually what Sony has been selling."

Old imaging war horse Kodak is also preparing for battle. Kodak straddles the camera business and is still selling both old-fashioned cameras loaded with film and digicams. Around 60 per cent of its sales come from low-end cameras that cost less than Rs 10,000.

But at the entry-level price range Kodak is is now feeling the heat from HP India -- the new kid on the block -- which wants to become one of India's top three camera companies by end-2005.

A few days ago HP launched a range of six cameras, the cheapest starting at a bargain basement Rs 8,000.

And it is bundling its cameras with printers and PCs -- where it is the country's number one player -- and hoping to build volumes rapidly.

So how does Kodak propose to stop the HP juggernaut in its tracks? Firstly, it will launch a below-Rs 7,000 digicam in early 2005.

Secondly, it's counting on the strength of the Kodak brand name.

Says Manisha Sood, country manager, digital and applied imaging, Kodak India: "Pricing is not the key issue, it is the brand positioning. We are the only imaging company with a 160-year relationship with customers. Over 1,500 Kodak retailers store our product like the entry level KB-10. Why should customers then ask for HP and not us?"

Also, all its mid-market models will be equipped with optical zoom. Kodak executives say its rivals don't offer this feature.

So why are international megacorps clicking away in the digicam market? The key reason is that they believe India will turn from a laggard into a giant digicam market.

At another level, the players reckon that the market will almost double every year for the next few years. For example, over 197,000 digcams are expected to be sold in India in 2004 and that's expected to climb to 325,000 in 2005.

Secondly, India and the Philippines are the only two countries where more analog cameras than digicams are sold -- so that offers a large opportunity.

At the retail level too there's room for growth. Only 5 per cent of the country's 100,000 photo outlets have digital camera print facilities.

But why has the digital revolution still not touched India? The fact is that Indian customers are still daunted by the technology.

Says Sood: "A survey of customers showed there were three problems against digicams -- price, the perception that they did not provide quality and that they were too technical."

Everyone is searching for ways to overcome these hurdles in coming years. Kodak, for instance, is aiming at the fear that digicams are complicated and not easy to handle. It has recently launched the Easy Share campaign in over 20 cities across the country.

Under the scheme customers are being offered a camera bundled with a printers for a discounted price of Rs 16,900. The idea is to show customers that it takes only 40 seconds to click a picture and make a print -- without any outside help.

Obviously customer education is high on the priority list for all the companies. Canon, for instance, is setting up Canon DigiClick centres across the country -- where potential customers can try out its cameras. The target is to open at least 25 such centres by year-end.

HP, not to be left behind, is using key dealers to set up 50 HP Digital Centres where camera buyers can test out products and make prints before buying.

But price is still a key factor in the Indian market. And there's no getting away from the hard fact that old-fashioned analog cameras (the expensive ones are at Rs 15,000) are far cheaper than digicams.

Secondly, import duties and local taxes add about 40 per cent to the cost of cameras -- so most people buy abroad and there's a brisk black market business.

This picture could change in the coming years. Duties should fall to around zero with the implementation of the WTO rules -- and that will bring down prices dramatically.

Says Bharadwaj: "At the moment we have absorbed about 15 per cent of the cost differential due to duties -- the rest we pass on to customers. But by next year duties will come down and there will hardly be any difference in the price here in India and Singapore."

Till that happens the companies are working out ways to ensure that customers buy cameras in India instead of picking them up during their travels abroad.

For instance, Canon offers a two-year warranty for cameras in India (that's compared to one year internationally) and with some models it also throws in a printer.

Similarly, to ensure that price is not the key issue, Sony is offering a two-year instalment scheme for customers (instead of the normal one year) at zero interest.

That brings down monthly instalments to as low as Rs 520 a month for its entry-level model.

Companies like HP are going even further to persuade customers to buy in India. They are trying to educate customers that printing copies from a digicam is not all that costly.

Says Ashwini Aggarwal, country marketing manager, consumer segment, HP India: "Considering that in an analog camera 25 per cent of the pictures can be discarded (because of quality) the effective cost of digital prints and analog is nearly the same at Rs 10 to Rs 12. So it's a misconception that digicam prints are expensive."

Of course, for printer and IT companies like HP and Canon the camera business is closely linked to their other key businesses -- printers, printer accessories and even PCs (for HP).

Only 1,000 photo printers are sold every month compared to 170,000 printers hawked a month. So, they are hoping that increased digicam sales will lead to more photo printer sales. That will also lead to an increase in consumables like ink cartridges and paper. HP and Canon are the big boys in this game.

That's why Canon made an entry into the photo printer market just four months ago. The company says that it has already grabbed a market share of over 30 per cent (from 2 per cent just a few months ago).

The company says that attachments rates (the percentage of customers buying cameras who also buy printers) globally is around 30 per cent -- it hopes it will be able to touch an attachment rate of 10 per cent in India over the next few months.

Inevitably, that will boost consumables sales. Bharadwaj expects to make more money from everything from ink cartridges to photo printer paper.

Currently, about 20 per cent of Canon India's turnover comes from consumables. The company hopes that will climb to about 33 per cent by next year.

HP, on the other hand, is using the bundling strategy -- it is offering a printer and a camera at an attractive price of Rs 14,999. They would be 25 per cent costlier if bought separately.

Next it will offer cameras bundled with its more expensive PCs. It predicts that 50 per cent of camera sales will come from bundled offerings.

No doubt the imaging business is in the throes of a dramatic change. And with companies slashing prices and pushing digicams aggressively, the epitaph for the old analog camera might be written much faster than anyone would have gambled on.