Cooking up a feast 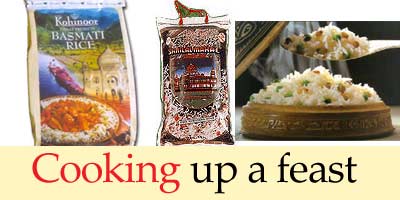 It was a king-sized banquet that made it to the Guinness Book of Records. The giant cooking pots were filled with 1,250 kg of basmati rice, 550 litres of oil and the meat from 100 sheep.

The result was a biryani banquet for 12,000 in Bahrain, the tiny island kingdom.

For rice exporter Anil K Mittal who controls the Rs 700 crore (Rs 7 billion) KRBL -- it was a promotional mega-event that succeeded beyond his wildest dreams.

Mittal, who exports India Gate rice, was searching for an innovative way to cook up a storm in the lucrative West Asian market. "We needed to do something big and exciting to promote our brand," he says.

Mittal isn't the only rice baron searching for new ways to cook up a feast at home and abroad. These one-time commodity traders -- who used to operate from the bustling, narrow bylanes of markets like Delhi's Naya Bazaar -- are becoming brand builders who want to see their products both in Indian kirana stores and on supermarket shelves around the world.

They are also looking at new growth recipes by turning out pre-cooked and ready-to-eat products aimed at people who haven't grown up eating rice in Europe and north America.

That's not all. In international markets across the world India's rice barons face powerful competitors from countries like Thailand, Vietnam and even the United States. Basmati rice must sell against other popular strains like Thai jasmine.

So, they are harnessing technology to the Indian cause and even experimenting boldly -- Ashwani Arora's Rs 400 crore (Rs 4 billion) Daawat has created a brand called Royal Feast, which is two-year-old 'vintage' basmati rather like wine. It will be sold at a 50 per cent premium presumably to connoisseurs who can tell their pure basmati from their Pusa basmati.

"The rice business is altering fundamentally from being a trading business to an industry where technology and branding is bringing in a major change," says Karan Chanana, the suave joint managing director of the Rs 240 crore (Rs 2.4 billion) Amira Foods, who operates from his farmhouse on the outskirts of Delhi and he also runs 1 MG Road -- India's first fashion mall on the outskirts of the city. As he speaks, Chanana opens a slick presentation on his company's hi-tech future.

The New Age rice merchants are hoping to pile their plate high both at home and abroad. In India there's a huge task ahead to convert an unbranded market into a sophisticated branded one.

Also, only 10 per cent of the rice exported from India (around Rs 3,500 crore to Rs 4,000 crore) is branded. But branded rice sales have taken off in recent years and have been growing at around 15 per cent in the domestic market compared to 5 per cent for unbranded rice.

And in the international market the growth is as high as 25 per cent compared to stagnant sales of unbranded rice.

India's top rice merchants clearly belong to a hardy strain. Unlike traders in many other fields, they've seen the writing on the wall and taken to branding at top speed.

Take Gurnam Arora, the joint managing director of the Rs 600-crore (Rs 6 billion) Satnam Overseas. His ad blitzkreig 'Make Love Not Rice' extolling the virtues of ready-to-eat branded rice took many by surprise and even shock.

But it has helped Arora to ensure that his brand bouquet is cooked just right. Around 80 per cent of his rice is sold in branded packages across the world. He's aiming to push that figure to 96 per cent in the next three years. Says Arora: "Our aim is to transform ourselves from a rice company to a foods company."

That is not wishful thinking. Arora recounts how he recently asked his daughter-in- law about her culinary skills and was told she could only make tea.

Instead of putting on a scandalised father-in-law act Arora drew a smart conclusion -- even in India there's a large market of yuppies working couples for whom cooking is a time-consuming chore.

To cater to this segment Arora has launched ready-to-eat rice products that need 10 minutes of microwaving. If that's too much Arora will also soon launch pre-cooked rice (like pulao with vegetables), which needs only two minutes in the microwave.

Satnam already has potential buyers for these instant products in Europe and Asia and it's hoping to sell over Rs 50 crore (Rs 500 million) of ready-to-eat foods this year.

At another level, Arora is putting up a Rs 40-crore (Rs 400 million) rice mill in the UK so he can make a giant push into the country's supermarkets. He has already hired 30 dealers and is initially targeting ethnic stores.

He isn't the only one hoping to score big with branding. Ashwani Arora, director, LT Overseas, who sells his basmati rice under the Daawat label, made his first moves in branding by hiring former Unilever marketing guru Shunu Sen a few years ago to work out a marketing plan.

The company first focused on packaging and introduced 20 kg pouches for the export market. Then it came out with a range of flavoured rice products.

Says Arora: "We expect flavoured rice to give us 5 per cent of our turnover. But our returns will be 20 per cent to 30 per cent higher than selling just normal branded rice."

India's rice kings are turning the heat high as they attempt to straddle the globe. There are dining tables in the US and UK to be conquered. And there's the whole of West Asia with its Indian diaspora and local population to be fed.

But that's not all -- they must also ladle out a big helping for themselves in the Indian market. Some key players believe they must first be brand builders at home before they aim at global dominance.

Take Sundip Jhunjhunwala, who studied at La Martiniere, Kolkata and whose family has been entrenched in the flour processing business for decades. His company, the Rs 600-crore (Rs 6 billion) REI Agro, came out with its flagship 'Miller' brand only six months ago. But Jhunjhunwala is trying new tactics to make up for lost time.

For a start, he's planning 10 regional brands. Hungama, is already selling in Chennai and Kolkata. Also, he's starting out with attractive promotional offers and is tying-up with powerful stores like Big Bazar.

Says Jhunjhunwala: "We hope that by moving towards branded rice net margins will go up from 2 per cent last year to 3.6 per cent this year".

But rice can be a tough business even for branded players. One company, which can testify to that is the Rs 250 crore (Rs 2.5 billion) United Rice Land, which owns Tilda, one of the UK's top brands.

R S Seshadri, who looks after United Rice's Indian operations, reckons that a company selling basmati rice can only hope to make money in five years out of seven. That's because of price fluctuations that affect the commodity when crops fail or are over-abundant.

Some companies are looking for ways to beat that pattern. Mittal's KRBL, for instance, is hoping to earn extra returns from paddy by-products.

The company generates 600 tonnes of husk, which will be converted into ferfrol, a chemical used for by refineries to purify petroleum products.

Then, the company will also generate 11 mw of power from the husk, some of which will be used for its own needs and the rest sold to the grid. The burnt ash from processing will be converted into silica, and rice bran oil (which reduces cholesterol).

Says Mittal: "The project will need an investment of Rs 100 crore (Rs 1 billion) but it will help us improve our margins." Mittal hopes these by-products will account for 30 per cent of turnover in coming years.

Seshadri is sceptical: "There is no successful model in the world where an integrated paddy infrastructure has succeeded. You tend to lose focus on your main business."

Indian millers and merchants are almost totally dependent on basmati at the moment. But they are also looking at ways to branch out in a big way.

They are, for instance, working out ways to make jasmine rice and take on the mighty Thais (the only producers of Jasmine). The government-owned Indian Agriculture Research Institute has already developed 'Sughandha", similar in aroma and texture to Jasmine.

Breaking the Thai stranglehold won't be an easy task but companies are already attempting it. One such is Amir Chand Jagdish Kumar, which sells Aeroplane rice. The company has just created a new brand 'Sophia' and has sold around 300 tonnes of jasmine packaged rice in the Gulf.

Says J K Suri, chairman: "The market for jasmine is four times the size of basmati. We have consciously priced the product cheaper by around $50 a ton than the Thais and are studying the response."

There are also the cheaper non-basmati strains like parmal and sela where sales can be expanded in a big way. Here, however, Indian companies find it tough to sell as cheaply as the Thais and the Vietnamese because of India's support price system, which distorts the prices at which rice is sold.

Says Suri: "As we have to buy this rice at the minimum support price we become uncompetitive unless the government offers us a subsidy." At other times, like this year the Food Corporation of India runs low on stocks and stops selling to the merchants.

Can India's rice kings become world-beaters? Some like Tilda have firmly established themselves in Britain. Now a clutch of others are attempting the transformation from being traders to marketing-savvy companies that can take on the Thais and the Vietnamese and feed the world.

How does United Riceland -- makers of UK's highly popular Tilda rice -- keep track of the crops in the field? In the old days the company's agents would have fanned out across the countryside and gossiped with farmers over cups of masala chai. Today the company is using satellites as magic eyes in the sky to keep tabs on crops ripening in the fields.

The satellites prowling overhead warn the company on everything from yields to whether there will be shortages. Says Seshadri: "It ensures we have control over the quality of the rice we buy and know where what is being grown."

Other exporters have been keeping an eye on United Riceland's techniques and following suit. The Basmati Export Development Fund -- funded by the rice exporters -- has tied up with Birla Technical Services to undertake a similar exercise.

But United Riceland is also moving swiftly in other directions. It has set up a Rice Research Development Centre in Mysore which is even equipped with a DNA lab -- the first of its kind in India -- which can check for quality, impurities or adulteration in basmati rice.

The rules surrounding food imports in Europe and the US are stringent and constantly getting tougher. Some European millers and retailers even insist that it should be possible to trace the field from where a consignment of rice has come from. This has resulted in some exporters moving to contract farming where the rice is grown specifically for them.

Daawaat, for instance, has tied-up with farmers who raise crops on 30,000 acres of land in Punjab. These farmers are offered farm extension assistance as well as seeds and an assurance that their products will be picked up.

Says Daawat's Arora: "The company processes about 20 per cent of its rice from these farms and we hope this will go up to 50 per cent in three years."

More importantly most rice exporters are going in for certification of their products internationally because of stringent quality control rules.

Then, there's the technological edge. Amira, for instance, is implementing ERP using Baan software. The aim, says Karan Chanana, is to scour the system and cut costs. One thing's for sure: nobody can accuse the rice exporters of not keeping up with the times.