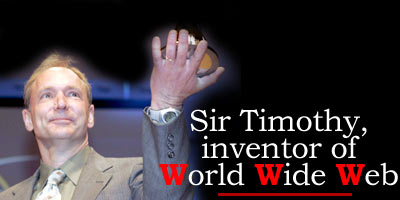 A long time ago, in a world where George Michael was still considered cool and being gay implied you were happy about something, a man called Timothy John Berners-Lee decided to change the face of humanity.

Two decades after that incredible invention, Berners-Lee was knighted by Queen Elizabeth II for it. The invention: the World Wide Web.

Honestly, if you haven't heard of him before now, you ought to be stuck in a room forever, with nothing more than a typewriter for company. However, as the chances of that happening are slim, here's a quick intro: Tim Berners-Lee was born in London.

His classmates must have had an inkling of what he was to become, considering he once built a computer -- at the Queen's College of Oxford University -- using a soldering iron, an M6800 processor and an old television.

They must have got a bigger clue when he was banned from using the university computer soon after, for hacking.

What did he do before thinking up the www?

A hell of a lot. He worked as a programmer, tried his hand at typesetting software and an operating system and, in 1980, came up with the idea of a project based on 'hypertext' while working at CERN -- the European Organization for Particle Physics Research.

Berners-Lee's project was aimed at facilitating the sharing and updating of information among researchers. With a little help from a guy called Robert Cailliau, he built a prototype system named Enquire. This programme (which was never published) formed the basis for the World Wide Web.

And then? The first Web site?

It didn't happen overnight, of course. There was the first browser, WorldWideWeb, developed on NeXTSTEP, and the first Web server called httpd. By December 1990, WorldWideWeb became the first successful demonstration of Web clients and servers working over the Internet.

The first Web site -- built by Berners-Lee at info.cern.ch -- went online on August 6, 1991. No fancy stuff like the Flash-crazy and Web cam-heavy stuff we have today: all it had was an introduction to the World Wide Web, how to set up your own Web server and stuff like that.

A nice man to know

Apart from his pioneering idea, what makes Berners-Lee special is the fact that he gave it away freely, with no patent and royalties. Now, would Bill Gates consider a thing like that?

Has he done anything more?

As if that wasn't enough, Berners-Lee was a driving force behind the World Wide Web Consortium (W3C), set up in 1994 at the Massachusetts Institute of Technology (MIT) Laboratory for Computer Science.

Along with Mark Fischetti, he also authored 'Weaving the Web', about the past, present and future of the www. An interesting point made in the book is that every aspect of the Internet should function as a web, rather than a hierarchy. All in all, not bad for a 49-year-old, yes?

What the knighthood means

It isn't his first trip to the Palace though. In 2002, Berners-Lee was awarded the Albert Medal of the Royal Society of the Arts by Prince Philip, Duke of Edinburgh.

For now, you can refer to him as Sir Timothy Berners-Lee Knight Commander.

He deserves the recognition

You bet he does. And he's had loads of it, too. Time magazine cited him as one of the 100 greatest minds of the twentieth century. He is a Distinguished Fellow of the British Computer Society, an Honorary Fellow of the Institution of Electrical Engineers, a member of the American Academy of Arts and Sciences, and Fellow of the Royal Society.

He received the Japan Prize in 2002, and the inaugural Millennium Technology Prize in Helsinki a month ago. The cash prize for the latter was worth one million euros.

Taking into account all he has given us, however, Berners-Lee's work is priceless. Think about that the next time you log on and listen to the wires sing.