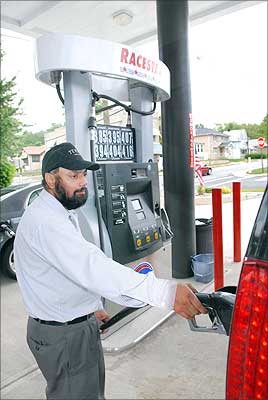 The brutal impact of rising fuel prices is quickly being felt far and wide. It threatens to change the way Indians live, earn, eat, educate, enjoy and retire in America.

"This is unimaginable. We never planned for this when we migrated to the United States. Our beautiful American dream has been seriously challenged for the first time. Can you ever imagine fuel prices rising above Rs 72 ($4 per gallon) in a country whose culture is built around cars? We do long-term planning - my retirement plan, my savings and my family's travel to India, all have been upset," says Rajan Gangahar, owner of Eastern Air, a courier service provider.

These are extraordinary times for America. And the escalating crisis will force undesirable and unwelcome changes in the lifestyle of Indian Americans.

Harbhajan Singh, a newspaper distributor in Los Angeles, rues that his profit margins have declined by 25 percent because his of his gas-guzzling vans. In Tennessee, retail store owner Sudhir Patel says he sells wheat flour and Indian rice at loss because he doesn't want to lose business. Yet, he says, non-basmati rice that was earlier sold at $10 for a 20-pound package now sells at Rs 1,118 ($26).

In Columbus, Ohio, homemaker Sunita Reddy says her family will cut down on eating out. In Indianapolis, Rita Vichare says that gas price at $4-plus is so bad for business that she has begun handing out freebies to customers to get them to visit regularly. In Boston, businesswoman Ishani Shah is reluctant to pay $1,400-$1,600 per ticket (Rs 60,200- 68,800) for herself and her two children for a trip to India that she had planned. She called her father in Ahmedabad to ask, "Isn't it better to cancel the trip?"

"I don't want to travel, Mom. Fuel price is too high," Payal Shah, 26, a lawyer working in Tallahassee, Florida told her mother Varsha, who lives in Jupiter City.

"The hike in fuel price is having a depressing effect on our businesses, and on our social and personal lives. Every aspect of our life is affected. We just don't know what will happen if gas prices touch Rs 294 ($7) in December, as they are rumoured to do. Payal is unable to see me because her journey back home will cost fuel worth Rs 645 ($150). It doesn't make sense to spend that much on a short trip," says Varsha.

Never since the wave of Indian immigrants started migrating into the US in the late 1970s have fuel prices risen so sharply and so fast. The price of crude oil in the global market is already nudging Rs 6,020 ($140) per barrel.
Gangahar says: "Every parcel that goes to India costs 30 percent more due to the fuel surcharges imposed by airlines. As Americans, we are used to cheaper gas. But now we will have to learn new ways to live, keeping in mind global warming and a weak and fluctuating dollar."

Nagindas Patel owns Knights Inn in Smyrna near Atlanta. His room charges of Rs 1,677 ($39) fetched him Rs 8,60,000 ($20,000) less this month compared to his earnings in the corresponding period last year. He told India Abroad: "Oh, don't ask me about fuel price hike. You are touching a raw nerve. In the last two months I have lost Rs 17,20,000 ($40,000). In this region, all our friends and relatives who own motels are in trouble. At this rate, only those who bought their motels cheap or at lower bank rates will survive." High gas prices have forced him to cancel his trip to Dallas to attend a wedding.

He says that motel owners who have brands like Day's Inn, Super 8, America's Best Value, Nice Inn, or Scottish Inn will be more affected as their typical clientele is now driving less and less.

Patel says, "If regular gas price touches $7 then many of motel owners will go bankrupt." Rita Vichare said the rising price of cheese, bread and dressings has hit her. And loyal customers who came in daily are now showing up 3-4 days a week. It's a big loss to me. I have introduced a foot-long (sandwich) for Rs 215 ($5) and I am giving cookies free with sandwiches. I am taking the loss home. It does affect us"

Sudhir Patel agrees that it is to endure losses than lose customers. Already, across America stores selling Indian goods and food, particularly rice and wheat flour, have increased retail prices three to four times. Madhu Rye, a creative writer, says: "It tears the heart to face this rise in gas price. I don't feel like moving out of home."

But, in this all-pervasive gloom, there are also solutions to fighting the gas price hike. Ruchir Kadakia, an analyst at Cambridge Energy Research Associates, told India Abroad, "The fuel price has effects on supply and demand. On the supply side there is very little that consumers can do. But I think on the demand side there are many choices. We can use mass-transportation. We can have fuel-efficient vehicles. A bicycle is a good idea, too."

Kadakia says that consumers will also have to reduce their dependence on energy by changing their spending habits.
Many Indians are logging on to gasbuddy.com, which lists the lowest gas rates in the region.

Varsha Shah says, "We keep inquiring from where our friends have filled up the gas today. As members of Sam's Club we get gas a little cheaper. I have sent my membership card to my daughter who drives to work." India has banned the export of Basmati rice and certain cereals that has also put the pressure on price. In US somehow some traders have made available wheat and rice from Sharjah, United Arab Emirates. One problem: Sharjah grows neither rice nor wheat.

This kind of 'smuggling' will keep prices under control. Harbhajan Singh travels 65 miles everyday to work. But, he says he will probably buy a Prius, Toyota's hybrid car. Rajan says, "Eventually, we will have to keep our expenses under control."

Rita's children have started going by recently started public transport in Indianapolis or they are sharing the rides. "If the summer is so harsh, imagine how high the gas prices will be in winter," Vichare asks.

Nitin Patel refuses to get scared of the high prices. "Those Americans whose savings graph is high and who plans finances well should be able to bear the heated economy. Most of us have learnt from our grandparents how to recycle things. We know how to save and our garages speak of our habits." Ishani Shah is not as positive and harks back to her life in the US.

'We wonder if it was a good decision to come to America. We came here keeping in mind the American economy, lifestyle, market, stocks, home and retired life. One dollar gave us 40 rupees. We thought when we are be old we will have some backup. But, now the weakening dollar makes me nervous. I wish I had invested in India, too. Returns on investments are higher there. For me, rising gas prices make me think once again about my old age and my children's future."

Image:  The US consumes 400 million gallons of gasoline every day. This demand for gas has pushed gas prices to record highs. | Photograph: Paresh Gandhi