The Supreme Court on Monday directed the Centre to implement the ambitious interlinking of rivers project in a time-bound manner and appointed a high-powered committee for its planning and implementation.

Observing that the project has already been delayed resulting in an increase in its cost, a three-judge bench headed by Chief Justice S H Kapadia said the Centre and the concerned state governments should participate for its 'effective' implementation 'in a time bound manner'.

The bench, also comprising justices Swatanter Kumar and A K Patnaik, appointed a high-powered committee comprising of representatives of various government departments, ministries, experts and social activists to chart out and execute the project.

The committee will consist of Union Minister of Water Resources, its secretary, Secretary of Ministry of Environment and Forest and four expert members appointed by Water Resources Ministry, Finance Ministry, Planning Commission and MoEF.

Representatives from state governments, two social activists and senior advocate Ranjit Kumar, who has been assisting the court in the case, will also be members of the committee.

"We direct the Union of India to forthwith constitute a committee for interlinking of rivers," the bench said, adding "we direct the committee to implement the project".

"The committee shall plan for implementation of the project," the bench said, adding the delay has already resulted in an increase in the cost of the project.

The river interlinking project was the brainchild of the NDA government and in October, 2002, the then Prime Minister Atal Bihari Vajpayee had formed a task force to get the project going against the backdrop of the acute drought that year.

A Centre-appointed task force had in a report recommended division of the project into two -- the Peninsular component and the Himalayan component.

This component included diversion of the surplus waters of the Mahanadi and Godavari to the Pennar, Krishna, Vaigai and Cauvery.

The task force had also mooted the diversion of the west-flowing rivers of Kerala and Karnataka to the east, the interlinking of small rivers that flow along the west coast, south of Tapi and north of Mumbai and interlinking of the southern tributaries of the river Yamuna.

The Himalayan component envisaged building storage reservoirs on the Ganga and the Brahmaputra and their main tributaries both in India and Nepal in order to conserve the waters during the monsoon for irrigation and generation of hydro-power, besides checking floods.

The task force had also concluded that the linking of rivers in the country would raise the irrigation potential to 160 million hectares for all types of crops by 2050, compared to a maximum of about 140 million hectares that could be generated through conventional sources of irrigation.

The fate of the ambitious Rs 5,00,000 crore (Rs 5,000 billion) project proposing linkages between major rivers by the year 2016 has remained a virtual non-starter and the detailed project report is in cold storage. 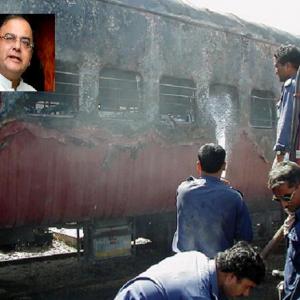