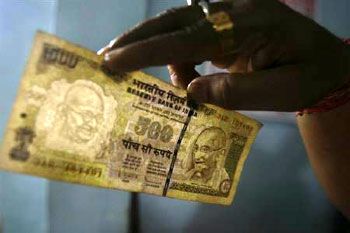 The rupee which had weakened in recent times and breached the 63 per dollar mark may depreciate further as the risk aversion among global investors may continue which would lead to they pulling out of emerging markets including India.

The rupee may trade at 63.75 a month down the line according to a Business Standard poll of 10 currency experts as Foreign Institutional Investors (FIIs) may continue to exit from India.

“The view among the regulator and the government is that the currency is overvalued. The rupee range has shifted from the earlier 61 to 63 per dollar to 62.50 to 64.50 a dollar. The weakness in stock market, some modest outflows for the first time after one year in FII debt and widely held view that rupee is overvalued will lead to a depreciating bias for the rupee,” said Mohan Shenoi, president - group treasury and global markets, Kotak Mahindra Bank.

Tuesday the rupee ended strong by 34 paise against the dollar compared with previous close at 63.15 due to dollar sale by banks and exporters. The US Fed's two-day meeting starts tonight and the market has discounted the fact that the Federal Open Market Committee (FOMC) may continue to maintain a hawkish stance. Currency experts believe some time in 2015 US Fed will start with the rate hike cycle.

“I do not see huge move in the dollar but overall the undertone may be strong. The period between May-June is considered to be negative seasonality for the global equity market due to which the risk aversion is high. That will be rupee negative,” said Anindya Banerjee, currency analyst, Kotak Securities.

Recently the rupee had depreciated to 63.56 on Friday recording a weakness of 0.82 per cent since the start of 2015. The rupee had ended at 63.04 on December 31, 2014. According to J Moses Harding, Group CEO, liability and treasury management, Srei Infrastructure Finance the weakness was by combination of domestic and global cues.

“The domestic cues are from dilution in optimism on macroeconomic fundamentals improvement in FY16 against the political headwinds for the government in economic policy initiatives. The shift into accommodative monetary policy stance against normalisation of recent re-rating of equity assets may lead to low FII appetite for India assets. The external adverse impact are from sharp recovery in Brent crude by 45 per cent from $45 to $65, dollar strength against major currencies and rate hike fears from US Fed in third or fourth quarter of 2015,” said Harding.

Though the Reserve Bank of India (RBI) is sitting on foreign exchange reserves which is at an all-time high, experts believe they will use it only if there is drastic fall in the rupee against the dollar.

Data from RBI released on Friday shows that for the week ending April 17, 2015 the central bank's foreign exchange reserves stood at an all-time high of $343.20 billion. The reserves rose by $2.79 billion during the week.