News
Business
Movies
Sports
Cricket
Get Ahead
Money Tips
Shopping
Sign in  |  Create a Rediffmail account
Rediff.com  » Business » Palanimanickam: Making the MoSt of a lesser job

Palanimanickam: Making the MoSt of a lesser job 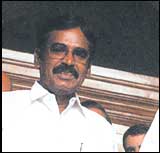 In North Block, the role of the minister of state (MoS) is always eclipsed since all secretary-level officers generally report only to the finance minister, particularly, when the incumbent is someone like P Chidambaram.

S S Palanimanickam understands this. And he takes it in good humour. "Both of us cannot wear the same veshti, you see," he says jokingly. But he is not so sympathetic to his rivals.

When an AIADMK member of Parliament asked the minister of state (MoS) about how Chidambaram treated him, Palanimanickam retorted, "Much better than how Jayalalithaa treats you and all her MLAs."

The four-time elected MP from Thanjavur does not mind being backstage and learning the ropes of trade in the North Block. He claims to have joined politics at the young age of 12.

Like the Dravida Munnetra Kazhagam (DMK) cadre of his days, he was actively involved in the anti-Hindi agitation during the mid-1960s.

His father, incidentally, had Congress affiliation and was the financial advisor to former President R Venkataraman when he was in Thanjavur.

But Palanimanickam says that his father never questioned him when he joined the DMK. And for all the defections in Tamil Nadu politics, he has stuck to the party ever since he joined it as a student.

Born on August 15, 1950, Palanimanickam grew up at his grandfather's place in a village between Tiruchirapalli and Thanjavur. He studied at the Pachiyappa College and earned his law degree from Madras Law College.

Palanimanickam contested his first election in 1984 from Thanjavur and lost. He was defeated in the subsequent two Parliamentary elections also. But after that he has continuously won the last four elections.

In the recent general elections, however, Palanimanickam faced a tough time in getting the ticket to contest from Thanjavur. Party sources say his proximity to the Murasoli Maran camp almost cost him. But he patched up with the M K Stalin camp and managed to placate the local DMK leader Kosimani.

While Palanimanickam might not have been very closely involved in the Budget-making exercise, he is definitely taking a lot of interest in understanding issues. Being an agriculturist himself, the MoS played a role in the credit package announced by Chidambaram for farmers on June 18 this year. "You can improve your knowledge vastly here," he says.

He, however, hopes to play a more pro-active role in the future. Quoting a Tamil maxim, he says, "First, I want to know the size of the ground. Then I will decide how to play on the ground."

Incidentally, like the finance minister, Palanimanickam is also a lawyer. He is quick to grasp issues and does his best to address the problems.

The Thanjavur MP has a good sense of humour. And he attributes it to the moderate climate in his hometown. "The Thanjavur climate is neither hot nor too cold. An early bath in the Cauvery and some reading during the morning hours does a lot of good to your mental abilities. And water flows in the Cauvery for nine full months in a year," Palanimanickam says.

When asked if the Budget was written by the Prime Minister (given the long and frequent sessions that Chidambaram had with Manmohan Singh in the run-up to Budget), he quips, "Even if he has written it, don't you agree he has written it well?"

Palanimanickam is also trying hard to remove the stigma attached to the MoS (Revenue) office, particularly after the Gingee Ramachandran episode.

"I want to clean up the place and bring some decorum to the MoS office," he says. Testimony to this success here is that Chidambaram routes or marks files even on economic affairs like banking and so on to his colleague in North Block.